From tax cuts for all to stealth tax hikes for years to come, it’s been quite the six weeks for our financial prospects.

On the 23 September, Kwasi Kwarteng rolled out out his shock and awe mini-Budget and while he managed to shoot himself in the foot with his 45p tax abolition overshadowing an income tax cut for everyone, he did present us with a basic rate cut from 20p to 19p.

With Kwasi and his boss Liz Truss gone, Chancellor Jeremy Hunt and Prime Minister Rishi Sunak are very keen to show the world they are the sensible adults in the room.

That has meant not just tearing up of those short-lived tax breaks but also some purposeful pitch-rolling ahead of the 17 November Autumn Statement on plugging a supposed £50bn black hole with stealth tax rises. 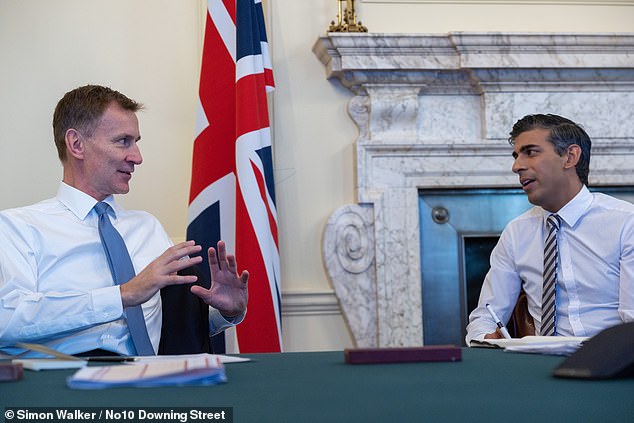 The adults in the room? Chancellor Jeremy Hunt and Rishi Sunak are keen to show they have a sensible grip on Britain’s finances – and that seems to mean tax cuts have turned to hikes

This doesn’t make them qualify as particularly subtle, but they do involve the classic stealth tax move of freezing income tax thresholds so more people are dragged in.

Threats of a capital gains tax and dividend tax hike are also doing the rounds and will probably draw more anger, but it’s the stealth income tax raid that would hit more people.

You can see why Chancellors like it. Even when it is obvious it is happening, stealth tax sounds so much more palatable than a tax hike, but it’s often worse.

And it is worth noting that even while he was dishing out tax cuts left right and centre, Kwasi was up to this trick too.

His cut in the basic rate of income tax would have put an extra penny of each pound earned in basic rate taxpayers’ pockets, but freezing the thresholds at which tax rates kick in offered the opportunity to take back more from their pay rises.

The most anyone could save from the proposed cut to 19p basic rate was £375 (spread over the £37,500 basic rate band) but your pay rise getting bumped onto higher rate tax can quickly eat more than that.

If you don’t raise the personal allowance in line with inflation or pay and pull more of people’s earnings into the basic rate of tax, they pay 20 per cent on an extra pound earned.

Meanwhile, if you don’t raise the higher rate tax threshold, people lose 40 per cent on any extra pound earned above it (albeit that’s instead of 20 per cent).

This is what is known as fiscal drag and it can often surprise people how powerful an effect it can have on the amount of their earnings they get to keep.

For example, it has now dragged a record 7.7million people into the 40 per cent tax band.

Meanwhile, as I will explain later it has also pushed more people into the most awkward parts of our tax system, where losing child benefit above £50,000, or the personal allowance above £100,000, can lead to an effective marginal tax rate of 60 per cent.

Here’s how the numbers work with someone getting a 5 per cent pay rise, the current average according to most recent ONS figures.

If the higher rate tax threshold goes up 5 per cent in line with average wages they will only pay 20 per cent income tax, handing over £502.60.

But if the threshold is frozen, their entire pay rise goes into the 40 per cent tax bracket and they will hand over £1,005.40.

And the problem with prolonged fiscal drag is that the effect compounds over the years, wages (hopefully) steadily go up, with rises added to previous rises, but frozen thresholds eat further into them.

This has more than kept pace with consumer prices index inflation – had it risen in line with that it would be £8,961.

But that does illustrate that 41 per cent of the seemingly generous rise in the personal allowance is simply down to it rising with the cost of living.

But 40 per cent isn’t really Britain’s highest tax rate and nor is the 45 per cent one charged to the highest earners above £150,000 instead that dubious honour goes to the effective rates caused by tax grab policies on those earning less than that.

Meanwhile, the removal of the personal allowance above £100,000 at the rate of 50p for every extra £1 earned bumps up the effective marginal income tax rate to 60 per cent.

If the level at which child benefit is removed had risen in line with inflation since the system’s introduction in 2013 it would be £62,500 rather than £50,000.

But top points for fiscal drag go to the personal allowance removal threshold at £100,000, which had it risen in line with inflation since Alistair Darling cooked up the idea in 2019, would now be £142,000.

You can see why Chancellors like this wheeze – and the bad news is that Rishi and Jeremy are rumoured to want to freeze tax thresholds now until 2028.