Biden specifically brought up the country’s elections next year, amid uncertainty of how the summit host might seek to extend his 37 year grip on political power in the country.

The White House included the specific tension points in an official ‘readout’ of the two men’s conversation, on a trip when his advisors were questions about a series of meetings Biden will hold with ‘autocrats.’

It came after Biden botched Hun Sen’s title and mistakenly called him the prime minister of ‘Colombia‘ during an opening statement at the ASEAN gathering.

Biden ‘urged Prime Minister Hun Sen to reopen civic and political space ahead of the 2023 elections,’ according to the official readout. ‘He also called for the release of activists detained on politically motivated charges, including U.S.-Cambodian dual citizen Seng Theary. President Biden reiterated the United States’ commitment to the Cambodian people and their aspirations for a more prosperous, democratic, and independent country.’ 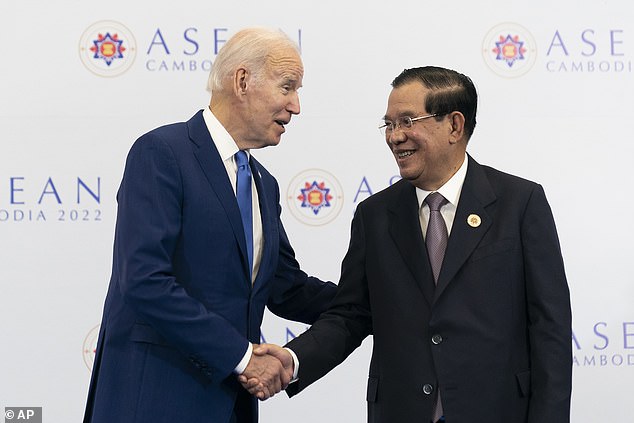 The activist got a six-year prison sentence after Facebook posts criticizing Hun Sen and backing an opposition leader.

Biden also raised a thorny issue in Phnom Penh’s delicate maneuvers to try to balance the interests of Beijing and Washington – which are both key to its economic and security future.

China is Cambodia’s top provider of foreign investment, while the U.S. is its top consumer of exports.

‘The President raised concerns regarding the situation at Ream Naval Base and underscored the importance of full transparency about activities by the PRC military at Ream Naval Base,’ according to the statement, following reports of a secret deal to allow Chinese military use of the facility.

‘President Biden reiterated the United States’ commitment to the Cambodian people and their aspirations for a more prosperous, democratic, and independent country,’ the statement concluded. 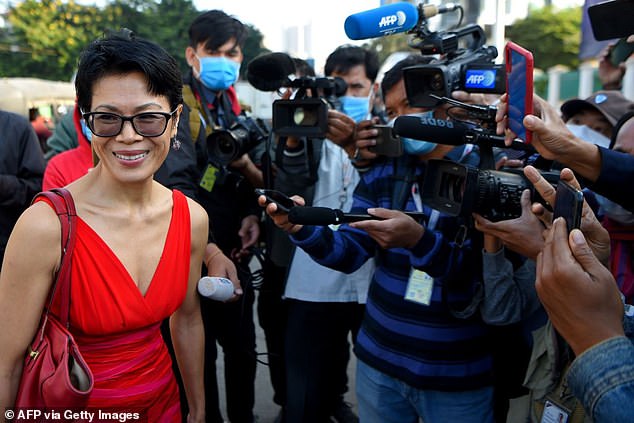 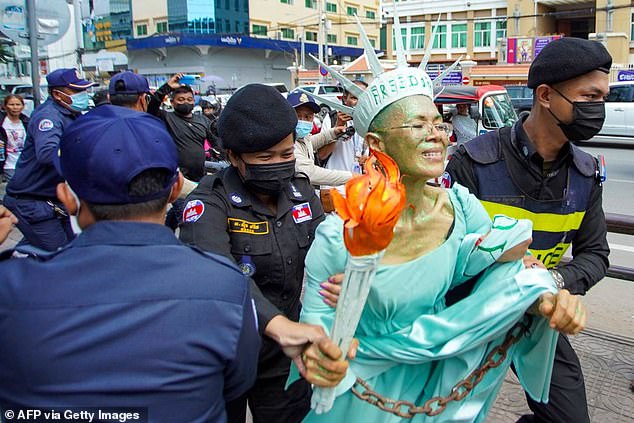 Cambodian-US human rights advocate Theary Seng, dressed as Lady Liberty, is arrested by police after being found guilty of treason in her trial in front of the Phnom Penh municipal court on June 14, 2022 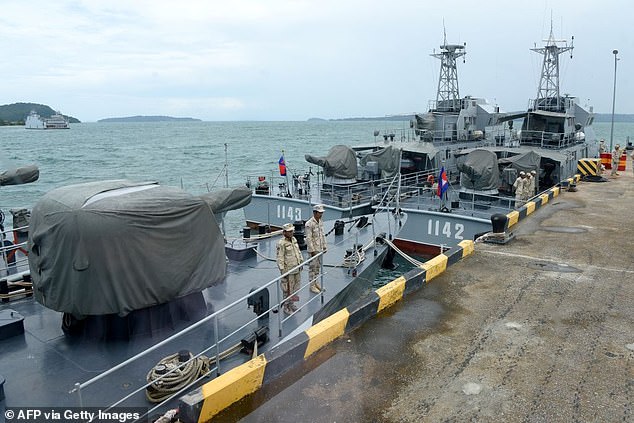 Cambodian naval personnel are seen on boats berthed at a jetty at the Ream naval base in Preah Sihanouk province on July 26, 2019 during a government organised media tour.  Cambodia on July 25 rubbished reports of a deal allowing China to use a naval base as ‘ill-intended’ and aimed at inciting unrest in a country whose public is increasingly uneasy about Beijing’s growing influence

He also thanked Cambodia for cosponsoring resolutions at the UN condemning Russia’s invasion of Ukraine.

The latest dose of diplomatic pressure – administered by the president as part of a high-profile summit that has drawn a raft of world leaders including from Beijing – comes a year after Hun Sen declared support for having his eldest son, Hun Manet, succeed him.

National Security Advisor Jake Sullivan was questioned en route to Phnom Penh about the president’s series of meetings with autocratic leaders on his trip.

Biden meets China’s Xi Jinping, and sat down with Egyptian President El-Sisi on this brief stint in Sharm El-Sheikh for an environmental gathering.

‘The President was proud and pleased to have the opportunity to engage with the host of that summit, the President of Egypt,’ said Sullivan.

‘The second summit is hosted by Cambodia. The host of that summit is the Prime Minister of Cambodia, so he’s engaging with him.’

‘The third summit is hosted by Indonesia, the G20. That’s a democratically elected leader, Joko Widodo,’ he noted. ‘So he’s meeting with the host of each of the summits that he’s attending … But he’s going to engage across the board in service of America’s interests and to advance America’s strategic position and our values. And that’s what guides his decision on every leader he chooses to engage with.’

Secretary of State Antony Blinken, who is also here for the summit, in August during his own meeting with the prime minister in Washington called for Hun Sen to be ‘fully transparent’ about the naval base, and an official statement included nearly identical language on reopening ‘civid and political space’ for 2023.

‘The Secretary reiterated the U.S. commitment to the Cambodian people and their aspirations for a more prosperous, democratic, and independent country, where all voices are heard and respected and the Kingdom’s autonomy is protected,’ the statement said.

Biden and his administration have long defended the practice of raising human rights issues in frank conversations with some of his foreign counterparts.

On Saturday, he did so at an event that is also being attended by Chinese Premier Li Keqiang and Russian Foreign Minister Sergei Lavrov – from two powerful autocratic regimes that unveiled their own sweeping pact to counter the West.