A bitter rift pulling apart one of Britain’s richest families was laid bare today after a judge revealed he wanted to put their 86-year-old patriarch in a public nursing home after his relatives failed to find care for him when he developed dementia.

Mr Justice Hayden has raised concern about the welfare of billionaire Srichand Parmanand Hinduja after overseeing hearings in the Court of Protection over a family wealth dispute.

The Hindujas topped 2022 Sunday Times Rich List and were said to be worth more than £28billion, while financial news agency Bloomberg says the family is worth £12billion.

He told how at one stage he had concluded that Srichand Hinduja should leave hospital, but he said relatives had not found private accommodation despite the ‘extraordinary scope and reach of their financial capacity’. 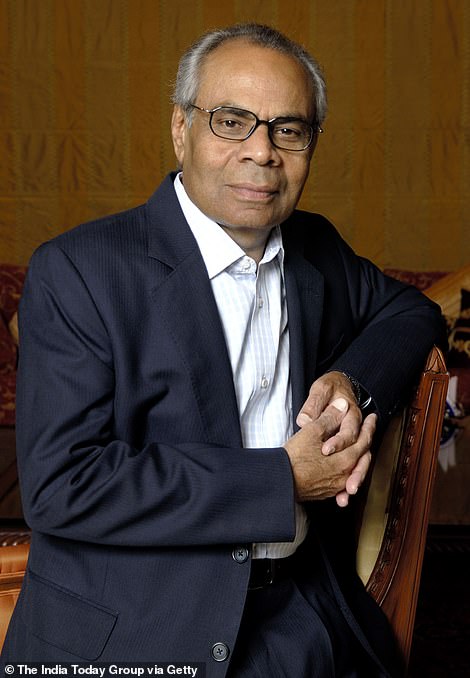 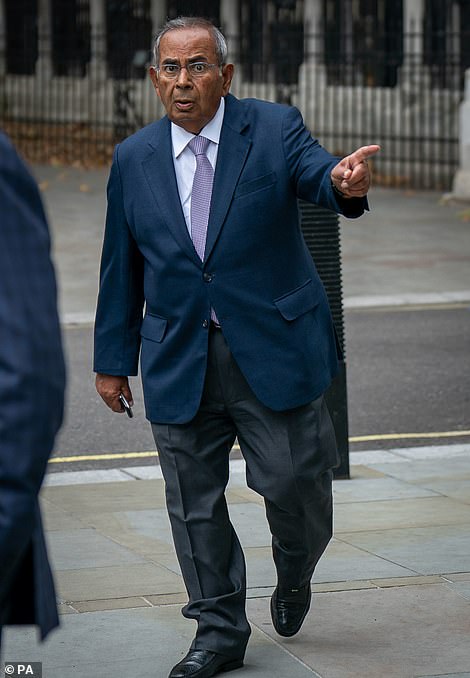 Srichand Parmanand Hinduja (left), who has dementia, and his brother, Gopichand Hinduja (pictured outside court in London) 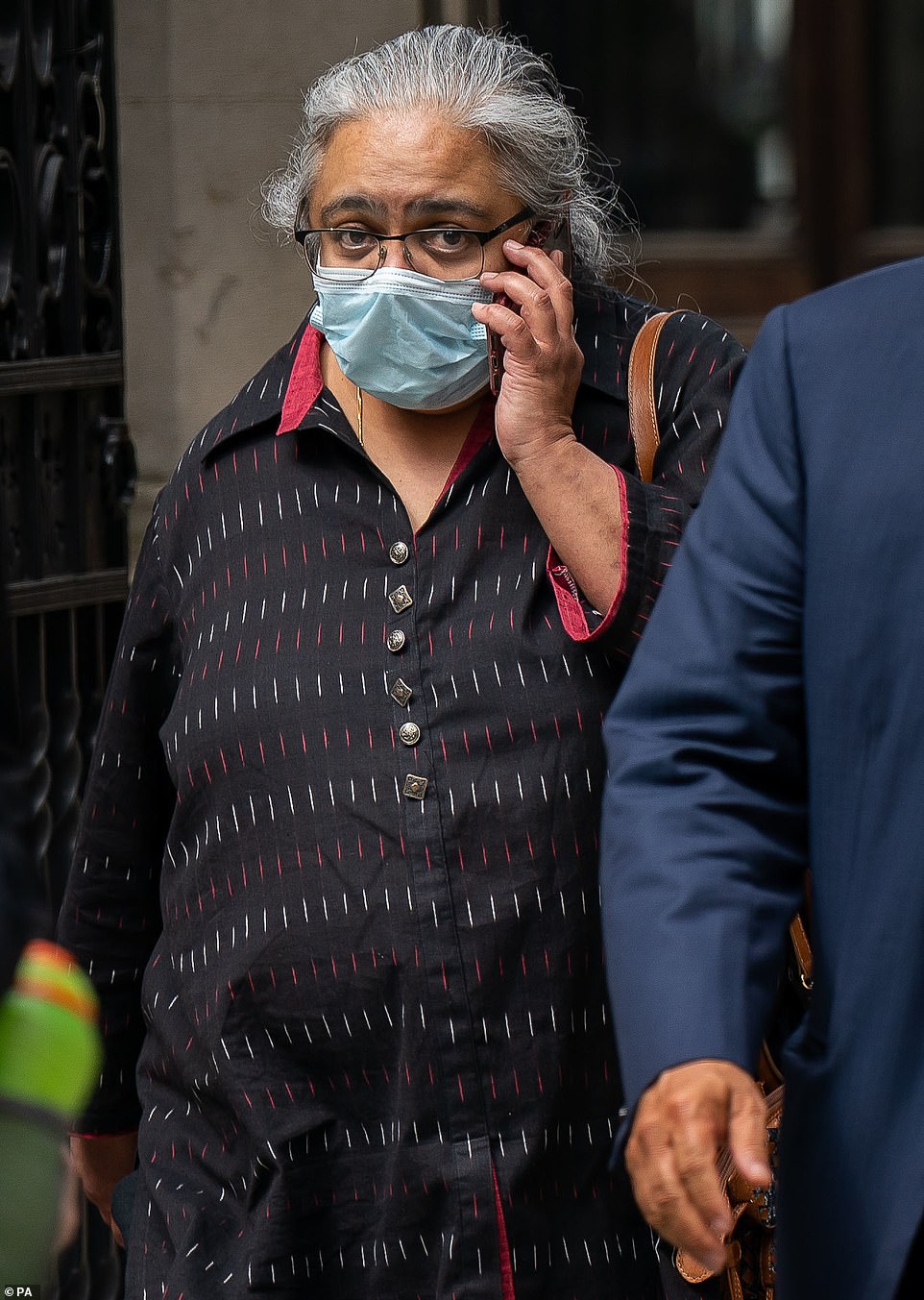 The Hindujas topped 2022 Sunday Times Rich List and were said to be worth more than £28billion. Pictured is Srichand and Gopichand’s sister, Vinoo

The judge said he had been driven to consider a placement in a public nursing home.

Mr Justice Hayden, the second most senior Court of Protection judge in England and Wales, has outlined concerns in written rulings published after public hearings in London.

Court of Protection judges consider issues relating to people who lack the mental capacity to make decisions for themselves.

Judges generally sit in public but normally rule that vulnerable people at the centre of litigation in the Court of Protection cannot be named in media reports of cases – to protect their human right to respect for private and family life.

But Mr Justice Hayden, who also hears cases in the Family Division of the High Court, has ruled that Srichand Hinduja, and others involved in the case, can be named.

Detail of the proceedings emerged today after Court of Appeal judges in London had analysed issues and ruled that journalists could name people involved.

Official Solicitor Sarah Castle, whose office helps vulnerable people embroiled in litigation, had represented Srichand Hinduja’s interests – and argued that reporters should be allowed to name him.

She said ‘open reporting’ was ‘likely to provide’ a ‘protective layer’ for Srichand Hinduja – and considered that the ‘parties intense focus on their own issues’ had led to him ‘repeatedly becoming marginalised in the Court of Protection proceedings’.

Reporters from Bloomberg, the PA news agency and blogger Professor Celia Kitzinger also made public interest arguments, and said they should be allowed to name names.

The judge said the risk of journalists creating an identification jigsaw when writing anonymised reports, or inadvertently breaching reporting restrictions, had ‘effectively closed reporting down’.

He said the Court of Protection litigation began in June 2020.

Srichand Hinduja’s brother, Gopichand Hinduja, had challenged the legitimacy of a lasting power of attorney, for property and affairs, Srichand Hinduja gave to his daughters, Vinoo and Shanu Hinduja.

Gopichand Hinduja had argued that, because of his dementia, Srichand Hinduja would have lacked the capacity to have created that lasting power of attorney.

The judge said at one stage Vinoo and Shanu Hinduja had told how they ‘drew on Srichand’s assets to fund their own costs of this litigation’.

He said it had been ‘further recognised and acknowledged’ that they drew on those funds for ‘their own private purposes’.

Mr Justice Hayden said the ‘identified conflict of interest was so flagrant’ and so ‘manifestly contrary to the fiduciary obligations of the attorneys’, that both Vinoo and Shanu Hinduja had ‘disclaimed the role’.

He said he had appointed a solicitor to act as Srichand Hinduja’s ‘deputy for property and affairs’.

The judge said Srichand Hinduja had been admitted to hospital in March 2021.

He said Srichand Hinduja’s ‘treating consultant’ had told him, then, that the elderly businessman had ‘only a very short time to live’.

The judge said Srichand Hinduja had ‘confounded his doctors’.

Mr Justice Hayden heard how the family members had also been embroiled in a separate High Court row in London over family assets.

Detail of that dispute emerged about in 2020, when another judge, Mrs Justice Falk, published a preliminary ruling, and named the people involved.

Srichand Hinduja had sued brothers Gopichand, Prakash, and Ashok Hinduja over a July 2014 letter, signed by all four of them, which said ‘assets held in any single brother’s name belong to all four’.

He wanted a declaration that the letter had no ‘legal effect’.

Mrs Justice Falk said Srichand Hinduja had taken legal action against his brothers to ‘determine the validity and effect’ of the letter.

She explained in that ruling how Srichand Hinduja was suffering from a form of dementia, lacked the mental capacity to give instructions to lawyers and had appointed Vinoo Hinduja to act as his ‘litigation friend’.

Mr Justice Hayden said he had been told that the family had agreed ‘heads of terms’ intended to end ‘all disputes’ between them in ‘all jurisdictions’.

Gopichand Hinduja told him that the ‘feud’ was over.

‘Srichand Hinduja is amongst the richest people in the United Kingdom,’ he said in written rulings.

‘However, he now suffers from severe Lewy Body Dementia.

‘This is a progressive, fatal disease and there are no treatment options.’

He said a ‘private residence with a full care package’ is the best way to achieve ‘peace and dignity’ for Mr Hinduja.

‘Manifestly, such a plan requires a financial settlement to be put in place to ensure the resilience of the care package,’ said the judge.

‘For many people, that might be a challenge, both administratively and financially.

‘For this family, it could be the work of a few days.’

But he said he had been told that there have been ‘some difficulties with the financial arrangements’.

‘The Official Solicitor has formed the clear view that notwithstanding Srichand Hinduja’s wealth and the outward respect that is afforded to him, his needs have become marginalised in a family dispute,’ said the judge.

He added: ‘I entirely accept the Official Solicitor’s analysis that Srichand Hinduja’s best interests have been consistently marginalised in consequence of the parties’ shifting positions.’

Mr Justice Hayden said there has been ‘a conflict within the family’ concerning the financing of a care package for Srichand Hinduja, and ‘suitable accommodation and appropriate care’ has not been identified.

‘I do not consider that this would have occurred if these issues had been ventilated in public and reported,’ he added.

‘The unique circumstances created by the family’s public profile and the (other) proceedings have served to stultify any effective reporting.

‘The risk of jigsaw identification or inadvertent breach of the reporting restrictions order has effectively closed reporting down, notwithstanding that this court has been sitting in public throughout.’

Mr Justice Hayden said Srichand Hinduja has been ‘placed at a disadvantage by his own family members’ conduct of the litigation’.

He said notwithstanding his ‘repeated and strongly expressed comments to the Hinduja family’ and the ‘extraordinary scope and reach of their financial capacity’, accommodation had not been identified.

The judge said he has been ‘driven to consider a placement in a public nursing home’.

Mr Justice Hayden said a ‘battery of highly-experienced lawyers’ has appeared before him.

He said there has also been a ‘range of doctors and healthcare professionals’ and ‘abundance of resources’.

‘(Srichand’s) vulnerability, despite all these protections, is both truly alarming and profoundly sad,’ added the judge.

‘Moreover, it is, in my judgment, a legitimate matter of public interest.’

The judge had told a hearing: ‘I am told he is a loved and respected man. This is not what has happened to him. He has been disrespected.’