FTX, the troubled cryptocurrency exchange, has filed for bankruptcy after a stunning financial implosion exposed concerns about its handling of customer funds and rocked broader crypto markets.

The Bahamas-based company, recently valued as high as $32 billion, said on Friday morning that it and its associated firms will file for Chapter 11 bankruptcy proceedings in federal court in Delaware.

Embattled FTX founder and CEO Sam Bankman-Fried has resigned his role and will remain in an advisory role to assist in an ‘orderly transition’, the company said.

Bankman-Fried, the crypto wunderkind known by his initials SBF, is reportedly under investigation by the US Securities and Exchange Commission for potential securities law violations.

FTX said that John J. Ray III, the Chicago-based lawyer who oversaw the liquidation of Enron after that company’s 2001 collapse, will take over as CEO to lead the company through bankruptcy. 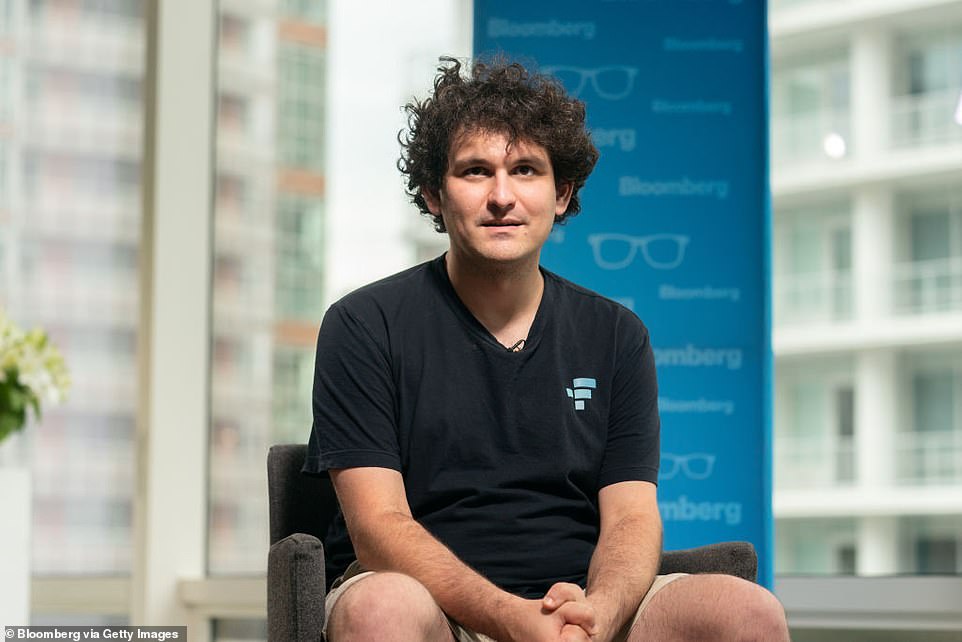 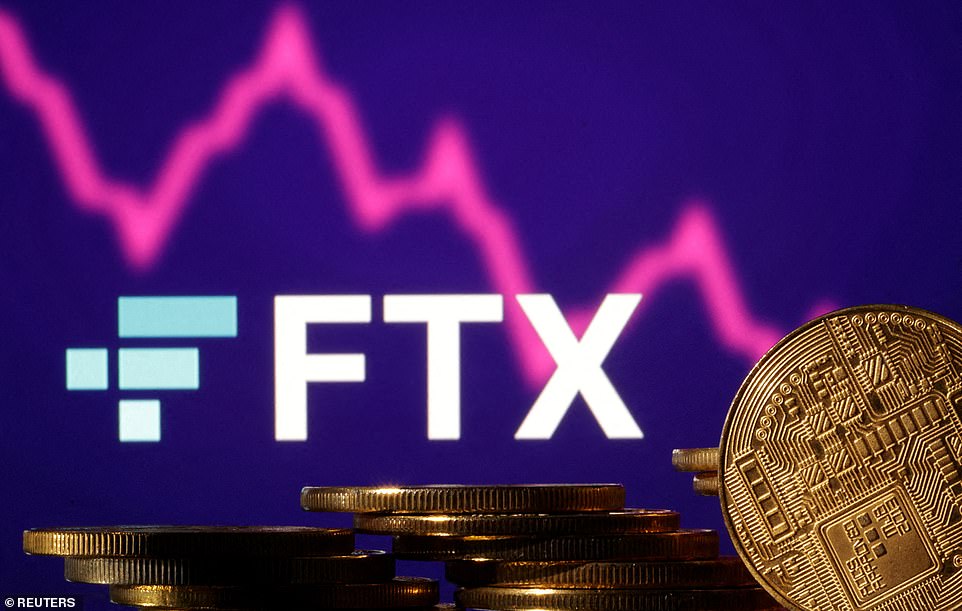 FTX, the troubled cryptocurrency exchange, filed for bankruptcy after a stunning financial implosion exposed concerns about its handling of customer funds and rocked broader crypto markets

Sam Bankman-Fried, a vegan who sleeps four hours a night, had become a public face of cryptocurrency, with a personal fortune once estimated at nearly $25 billion.

Almost always appearing with a hoodie and a dark T-shirt, Bankman-Fried has pledged to donate almost all of his fortune to his favored causes, like animal welfare and the fight against global warming.

The son of Stanford Law School professors and a graduate of the elite Massachusetts Institute of Technology (MIT), he was born on the Stanford campus and raised in California. 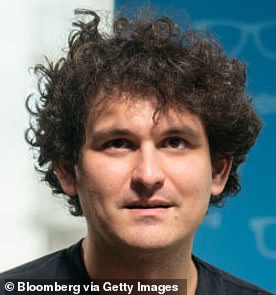 He worked as a broker on Wall Street before turning to cryptocurrencies in 2017.

Bankman-Fried moved the company to the Bahamas, where taxes are almost nonexistent, saying the Caribbean nation is ‘one of the few countries that has a comprehensive licensing regime for cryptocurrencies and cryptocurrency exchanges.’

He has been a vocal advocate for smoother access to the crypto market for the general public, particularly in the United States.

The collapse of FTX follows an week of whiplash developments, starting with a crisis of confidence after Changpeng ‘CZ’ Zhao, the CEO of the world’s largest crypto exchange Binance, ordered a sell-off of FTX’s in-house token.

Panicked FTX customers attempted to withdraw $6 billion of funds in 72 hours, and the company was unable to cover its obligations with depositors due to a ‘liquidity crunch’.

FTX may have been using customer deposits to fund risky bets by its affiliated hedge fund, Alameda Research, according to the Wall Street Journal — a legally dubious move that would be sure to draw regulatory scrutiny.

After FTX was forced to freeze customer withdrawals, Binance stepped in with an offer to bail out the firm — but backed out of the deal after reportedly finding a massive $8 billion hole in the company’s books.

Bankman-Fried scrambled to find other financial backers to rescue FTX, but as reports mounted about federal probes into his handling of customer funds, he found no takers.

The 30-year-old Bankman-Fried, once seen as the ‘poster boy’ of crypto, had an estimated net worth of $15.2 billion on Monday, but by the end of the week, his fortune was all but wiped out.

‘Hopefully things can find a way to recover. Hopefully this can bring some amount of transparency, trust, and governance to them. Ultimately hopefully it can be better for customers,’ he added.

‘I’m piecing together all of the details, but I was shocked to see things unravel the way they did earlier this week,’ he wrote, vowing to compose a longer statement detailing the ‘play by play’ of his company’s collapse.

‘The immediate relief of Chapter 11 is appropriate to provide the FTX Group the opportunity to assess its situation and develop a process to maximize recoveries for stakeholders,’ new FTX CEO Ray said in a statement.

Ray vowed to conduct the bankruptcy proceedings with ‘diligence, thoroughness and transparency.’

Prior to filing for bankruptcy, FTX was scrambling to raise about $9.4 billion from investors and rivals, Reuters reported citing sources, as the exchange sought to save itself after a run of customer withdrawals.

FTX is the latest in a series of cascading disasters that have shaken the crypto sector, now under intense pressure from collapsing prices and circling financial regulators.

The meltdown follows a year of intense pressure for crypto markets, as rising interest rates prompted investors to ditch risky or speculative assets.

And alarm bells were ringing even before the FTX fiasco, following the collapse of several crypto lenders, including Celsius and Voyager, major tokens terraUSD and Luna, and hedge fund Three Arrows Capital.

Despite the potentially immense legal jeopardy he faces, Bankman-Fried remained active on Twitter 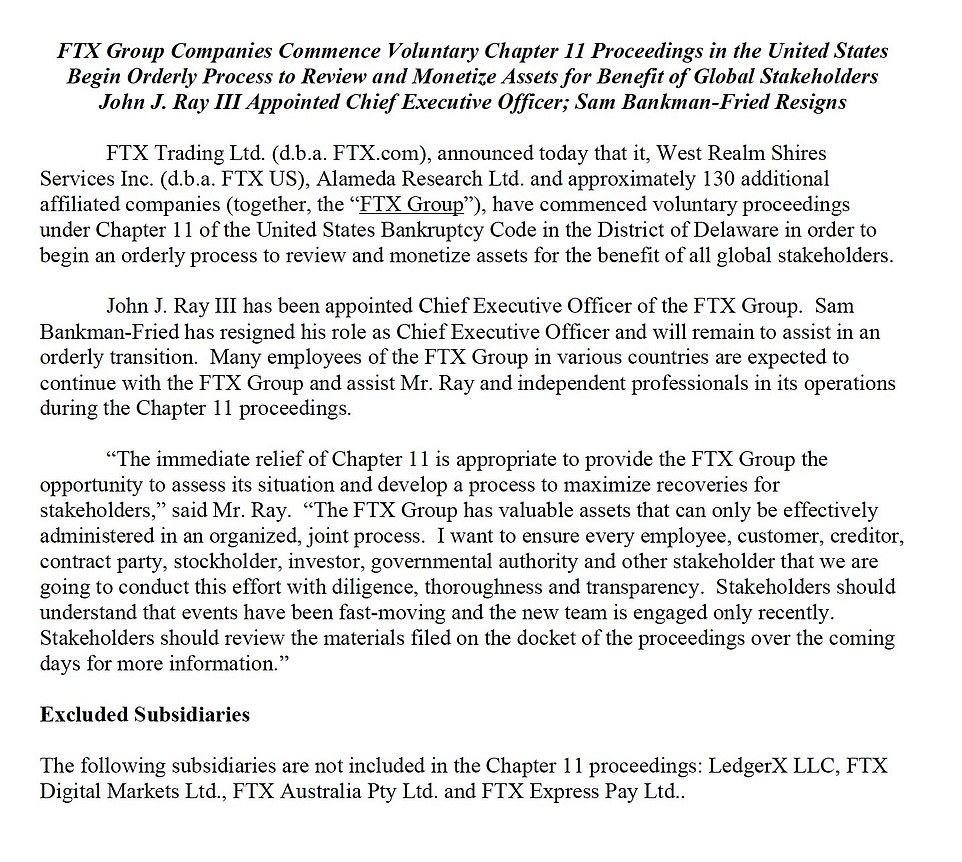 Now the failure of FTX is also sending tsunami-like waves throughout the crypto universe.

Cryptocurrency lender BlockFi announced on Twitter late Thursday that it is ‘not able to do business as usual’ and pausing client withdrawals as a result of FTX’s implosion.

In a letter posted to its Twitter profile late Thursday, BlockFi – which was bailed out by Bankman-Fried´s FTX early last summer – said it was ‘shocked and dismayed by the news regarding FTX and Alameda.’

The company ended by saying any future communications about its status ‘will be less frequent that what our clients and other stakeholders are used to.’

Bitcoin tumbled immediately after the letter was posted, losing close to 5 percent before inching back above $17,000 overnight.

The original cryptocurrency, Bitcoin. had been hovering around $20,000 for months before the FTX’s problems became public this week, sending it briefly to around $15,500, a two-year low.

Cryptocurrency exchange FTX stood on the brink of failure on Thursday after a bailout from larger rival Binance collapsed. Chief executive Sam Bankman-Fried said he was exploring all options for his firm.

Here is a history of FTX since its foundation in 2019:

October – FTX raised capital at a valuation of $25 billion from investors including Singapore’s Temasek and Tiger Global.

Jan. 27 – FTX’s U.S. arm said it was valued at $8 billion after raising $400 million in its first funding round from investors including SoftBank and Temasek.

Jan. 31 – FTX raised $400 million from investors including SoftBank at a valuation of $32 billion.

July 1 – FTX signed a deal with an option to buy embattled crypto lender BlockFi for up to $240 million.

July 29 – FTX said it won full approval to operate its exchange and clearing house in Dubai.

Aug. 19 – A U.S. bank regulator ordered crypto exchange FTX to halt ‘false and misleading’ claims it had made about whether funds at the company are insured by the government.

Nov. 6 – Binance CEO Changpeng Zhao said his firm would liquidate its holdings of FTT due to unspecified ‘recent revelations’.

Nov. 8 – FTT collapses by 72% as clients swamp the exchange with withdrawal requests. Binance offers a potential bailout in a non-binding deal.

Nov. 9 – Binance backs out of the rescue plan, saying: ‘As a result of corporate due diligence, as well as the latest news reports regarding mishandled customer funds and alleged US agency investigations, we have decided that we will not pursue the potential acquisition of FTX.com.’