For nearly two decades it seems like Demi Moore has been turning back the clock when it comes to her youthful appearance and amazing figure.

On Friday, the GI Jane actress showed she continues defying time when she shared a two images with her 12.3M Instagram followers less than two weeks before she is set to celebrate her 60th birthday on November 11.

The beauty captioned the post, ‘Becoming Maureen Please Baby Please is out in theaters NOW! Link in stories to find showtimes near you.’ 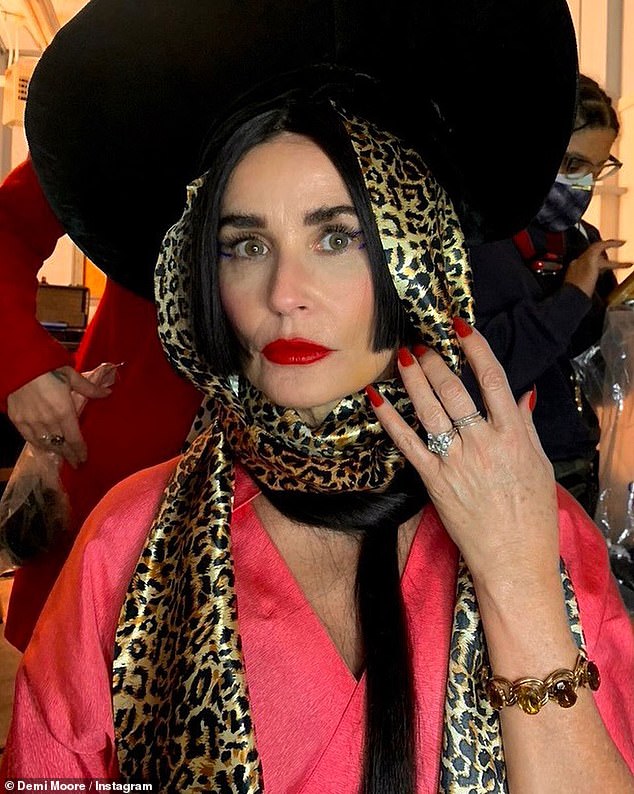 The closeup photo revealed her character’s bold red lipstick and nails, and blue v-shaped eye-liner extending from her eyes.

The look showcased her amazing complexion and dark tresses, which she parted behind a leopard scarf worn around the frame of her face.

Audiences can catch Demi’s performance as rebellious Maureen in the fifties-set drama Please Baby Please, which hit US theaters Friday.

The critically-acclaimed, sexually-charged flick centers on a newlywed couple who live in Manhattan, witness a murder and become the obsession of a greaser gang. 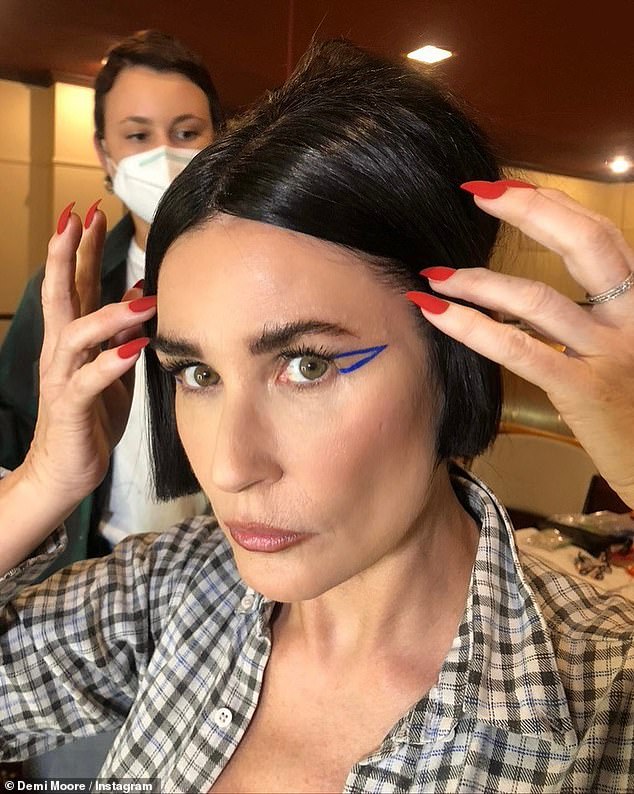 Taking her role seriously: The closeup photo revealed her characters’ bold red lipstick and nails, and blue v-shaped eye-liner extending from her eyes 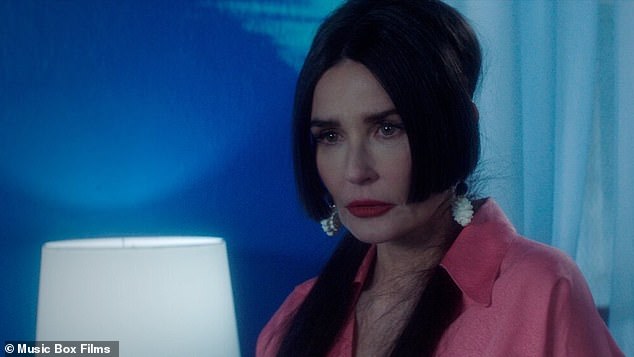 Last week on Wednesday, the Ghost actress stripped down to her underwear and struck a selfie pose in an orange hoodie jacket.

For the post, Moore stood in front of a mirror at a side angle, which helped highlight her firm legs and derriere muscles. 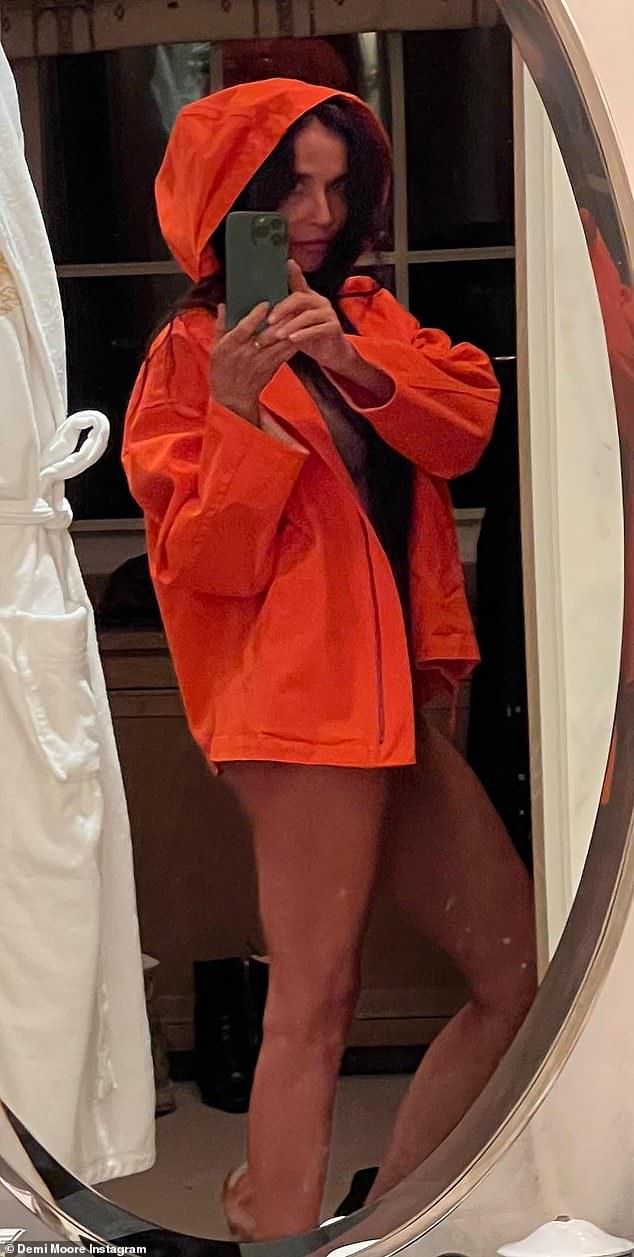 Flaunt it: Moore showed off her rock-solid legs while striking a few poses for Instagram last week

The A Few Good Men star commented on her age in 2019, when she spoke to The Mirror saying ‘gravity is going in some directions I’m not fond of.’

‘But I feel for myself it’s about acceptance…embracing it and no longer looking for what’s wrong – just being accepting of everything,’ Demi said.

‘My friend put up a quote, “My skin no longer fits the same but my life does.” I feel like that’s true. The reality is, the comfort I feel in my skin is the greatest gift. I’m really happy to be where I am.’ 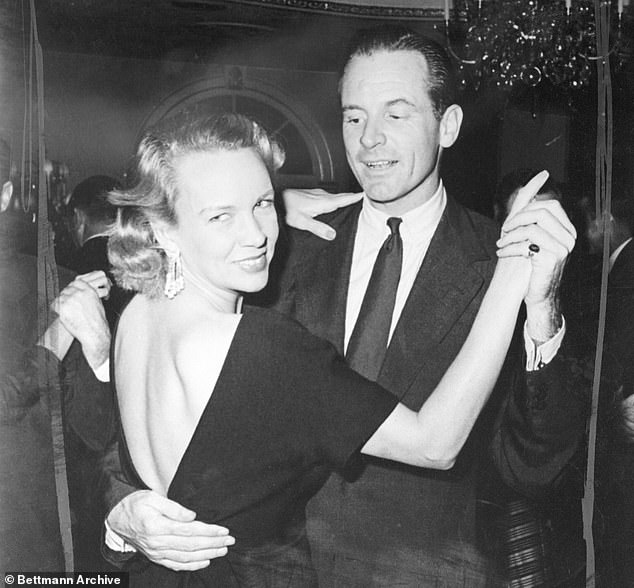 New acting gig! In September, The Ghost actress signed on to play socialite Ann Woodward (L, pictured in 1955), who was infamously accused of murdering her husband (R)

According to Variety, on September 16, Moore signed on to play socialite Ann Woodward, who was infamously accused of murdering her husband in 1955.

The Indecent Proposal star was in France last month on the set of Coralie Fargeat’s feminist body horror film The Substance.

[ad_1] No one likes marks on their complexion. You’ve probably heard words like melasma and liver spots. Both refer to the same condition:…

[ad_1] Our penchant for fear dates back millennia. But new research is testing the theory that indulging in morbid curiosity and…