Elon Musk publicly slammed Mark Ruffalo for criticizing his purchase of Twitter, telling the actor that ‘not everything that [Rep. Alexandria Ocasio-Cortez] says is 100 percent accurate’ following an online spat with the progressive politician.

‘Hot take: not everything AOC says is 100% accurate,’ Jack Dorsey‘s successor said in response to Ruffalo, who is best known for portraying Hulk in the Marvel ‘Avengers’ movies and for his role in the Academy Award-winning film,’ Spotlight,’

A day earlier, on Saturday, the 54-year-old actor tweeted: ”Elon. Please—for the love of decency—get off Twitter, hand the keys over to someone who does this as an actual job, and get on with running Tesla and SpaceX.’

‘You are destroying your credibility. It’s just not a good look,’ he added.

On Saturday, Twitter CEO Elon Musk responded to Mark Ruffalo on Twitter, telling the actor to not believe ‘everything AOC’ says 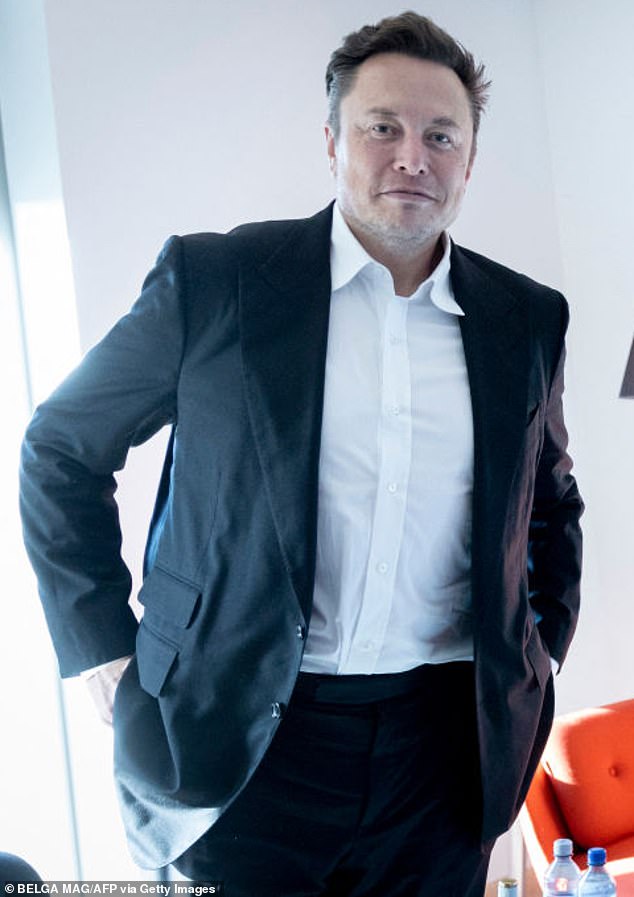 Musk, who’s estimated to be worth $223 billion, has been criticized for his views on free speech and restructure of Twitter, including adding monthly payments for additional features 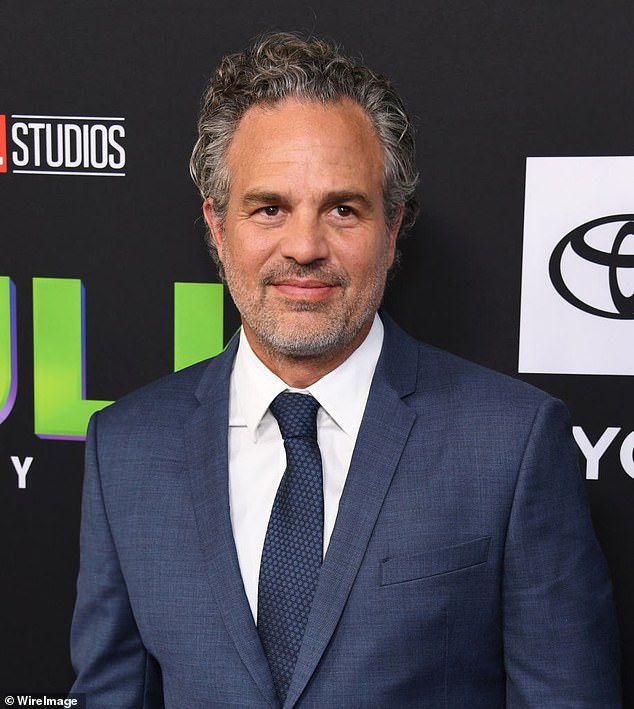 Musk, who was officially announced as Twitter’s new owner last week, has pledged to increase free speech in his attempt to dissolve the social media platform’s ‘left wing bias.’

However, the SpaceX and Tesla founder has also faced backlash from celebrities and politicians for charging users a monthly subscription for verification as a way to increase Twitter’s revenue stream, including AOC.

The House representative from New York tweeted on Wednesday: ‘Lmao at a billionaire earnestly trying to sell people on the idea that ”free speech” is actually a $8/mo subscription plan.’ 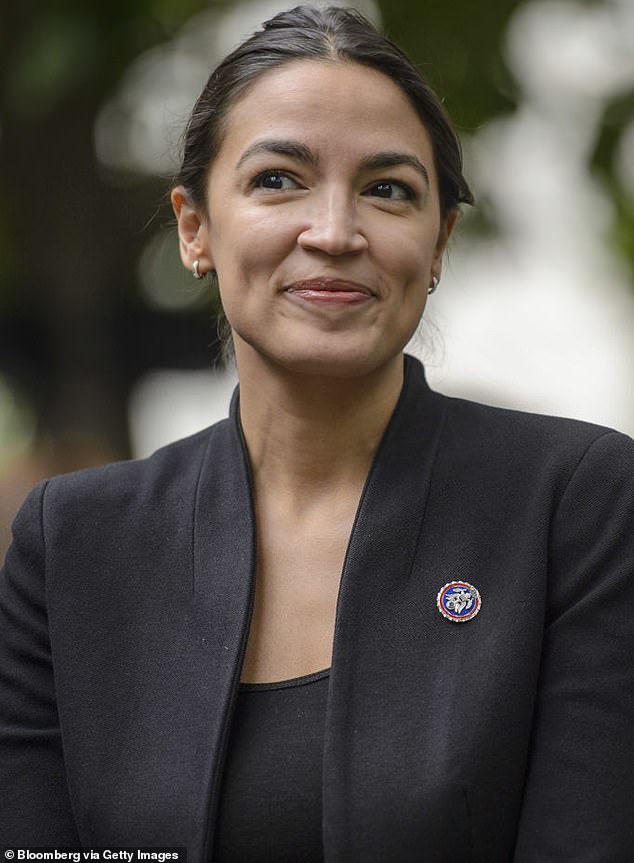 Earlier this week, Rep. Alexandria Ocasio-Cortez (D-NY) called out Elon Musk, 51, for ‘selling people on the idea that “free speech” is actually an $8/[month] subscription plan’ before the billionaire savagely replied: ‘Your feedback is appreciated, now pay $8’

On Thursday, AOC claimed she was experiencing issues on the Twitter app following her continuous spat with the South African-born business magnate.

‘Also, my twitter mentions/notifications conveniently aren’t working tonight, so I was informed via text that I seem to have gotten under a certain billionaire’s skin,’ she tweeted with a laughing emoji.  ‘Just a reminder that money will never buy your way out of insecurity, folks.’

Musk, again, shared another tweet on Friday, saying: ‘Trash me all day, but it’ll cost $8.’ 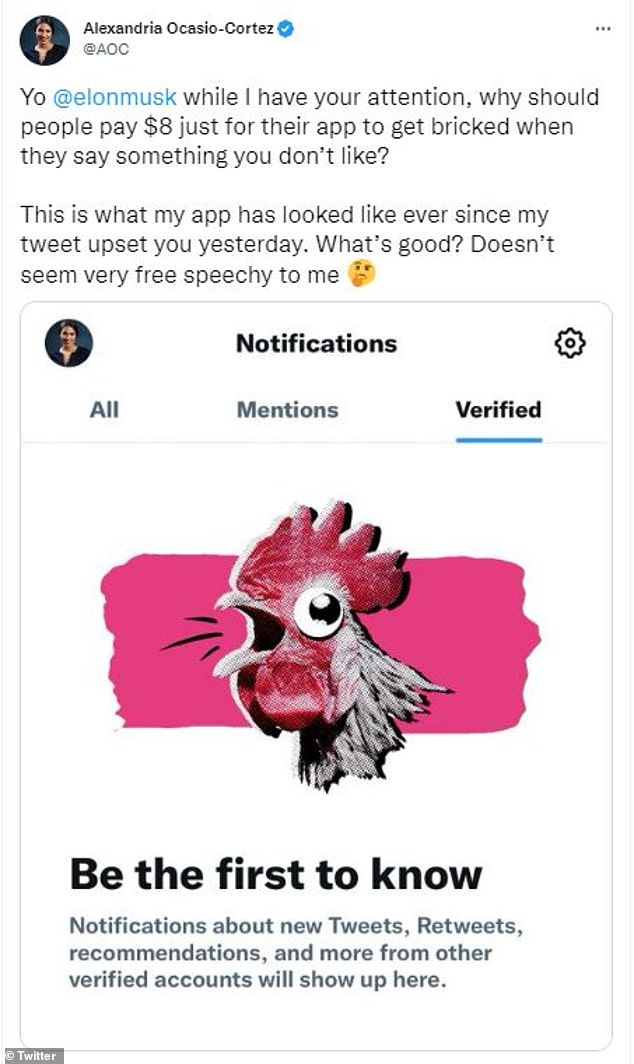 On Thursday, AOC claimed her Twitter account had been experiencing issues with receiving notifications after her public spat with Musk on social media

In response to his critics on a monthly, $8/month subscription plan for verification, Musk said: ‘Trash me all day, but it’ll cost $8’

Later in the same day, 3,700 employees at Twitter were subjected to layoffs in a company staff overhaul, raising grave concerns about chaos enveloping the social media platform and its ability to fight disinformation just days ahead of the U.S. midterm elections.

The speed and size of the cuts also opened Musk and Twitter to lawsuits. At least one was filed alleging Twitter violated federal law by not providing fired employees the required notice.

Musk tweeted late Friday that there was no choice but to cut the jobs ‘when the company is losing over $4M/day.’

He did not provide details on the daily losses at the company and said employees who lost their jobs were offered three months’ pay as a severance.

[ad_1] Anna Paul has suffered a very embarrassing cooking fail after attempting to cook an Italian dish at home. The Tiktok…