A Missouri woman is suing L’Oreal over claims chemicals in its hair straightening products left her with womb cancer and unable to have children.

Jennifer Mitchell, 32, was diagnosed with the disease in 2018 and forced to have a hysterectomy — robbing her of the chance of ever conceiving naturally.

She started using chemical hair straightening products in 2000 when she was in third grade and had no family history of cancer.

Ms Mitchell alleges her diagnosis was ’caused by regular and prolonged exposure to phthalates and other endocrine disrupting chemicals’ found in L’Oreal products.

Her lawsuit, filed in Illinois federal court, comes a week after a Government-funded study linked chemical straighteners to womb cancer for the first time.

It found people who used the products more than four times a year were twice as likely to develop uterine cancer than those who rarely used them.

Scientists cannot be certain the products cause cancer but they found a ‘probable’ link.

Ms Mitchell, from Waynesville, said she was ‘shocked’ after learning about the study last week and thought ‘this could be an answer to my diagnosis. 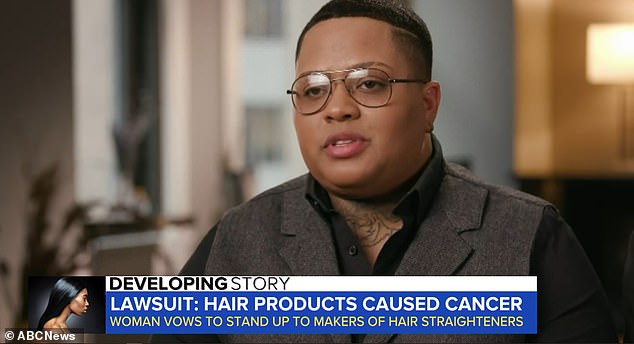 Jennifer Mitchell, 32 and from Missouri, claims that L’Oreal’s hair straighteners left her with uterine cancer. She had to have a full hysterectomy — removing her womb and cervix — to stop it spreading to the rest of her body, robbing her of the chance of having children 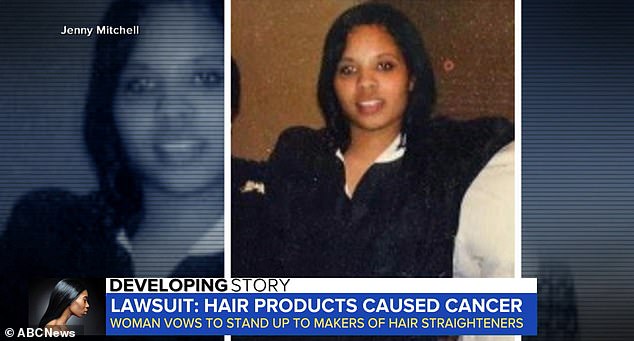 Ms Mitchell, pictued above, said she used the products once a month from the age of ten years for two decades. She was diagnosed with uterine cancer in 2018, at the age of 28 years 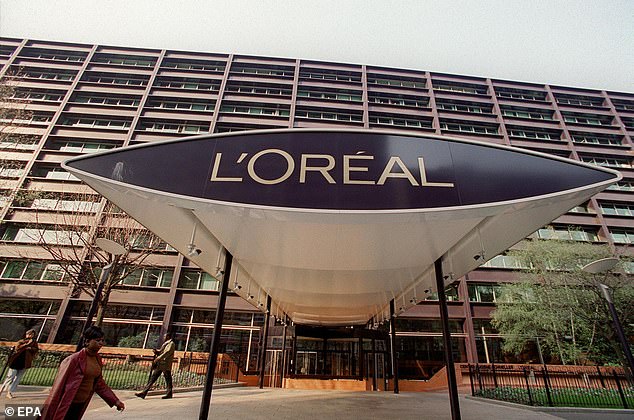 L’Oreal is yet to respond to requests for comment on the case. Four other companies are also being challenged in the lawsuit

She told Good Morning America: ‘Not being able to carry my own children has been the hardest thing that I’ve ever had to deal with.

‘This is a dream of mine that I’ve always wanted.’

Her attorney says black women — who use the products more frequently— have ‘long been the victims’ of company marketing strategies.

Uterine cancer: What is it?

Uterine cancer is uncommon, accounting for three per cent of all cases among women every year.

It describes two types of cancer: Endometrial, in the lining of the uterus, or uterine sarcoma, in the muscle wall of the uterus.

Women are not screened for the cancer normally, but the endometrial type tends to be diagnosed at an early stage helping prevent its spread.

What are the symptoms?

How is it diagnosed?

Uterine cancer is diagnosed through a combination of blood tests and scans of the uterus area.

How is it treated?

Treatment options include chemotherapy and radiotherapy to destroy the cancer cells.

Surgery may also be offered in some cases of endometrial cancer.

What is the survival rate?

The American Society of Clinical Oncology — cancer research experts — says that 81 per cent of women diagnosed with the cancer live for more than five years.

But for black women the five-year survival rate is six per cent.

They say this is because it tends to be more aggressive in these individuals, although it is unclear why this is the case.

In her case filed to the Northern District of Illinois federal court, Ms Mitchell said her cancer was ‘directly and proximately caused by her regular and prolonged exposure to phthalates and other endocrine disrupting chemicals’ found in L’Oreal products.

Ms Mitchell started using the products around once a month when she was about 10 years old.

But at the age of 28 she was given a devastating diagnosis.

She went for a full hysterectomy — which involved removing the womb and cervix — to get rid of the cancer.

She kept using the products, however, until March 2022, unaware that they could be behind her cancer.

Flanked by supporters outside the court on Monday, she said: ‘I’m from a big family, I have six sisters, and that was something that I have always dreamed of becoming was a mother

‘I go in for my first appointment and as in most consultations they do what they call is a vaginal ultrasound.

‘Three days later I got a call, I am 28 years old and i was just diagnosed with uyterine cancer.

‘At that time bat the age of 28 my dreams of becoming a mother were gone.

‘I am 32 years old right now, and I am still feeling that void of not being able to bear my own child.’

Her attorney Ben Crump, who has a daughter, said he was ‘horrified’ to learn that chemical hair straighteners can cause uterine cancer.

He said companies should have been aware of the potential health risks of their products.

‘Black women have long been the victims of dangerous products, specifically marketed to them.

‘We will likely discover that Ms Mitchell’s tragic case is one of countless cases in which companies aggressively misled Black women to increase their profits.’

The case accuses L’Oreal and the other four companies of failure to warn consumers, negligent failure to warn, selling products with a design of manufacturing defect, gross negligence and negligent misrepresentation.

It also accuses them of committing fraud, fraudulent concealment, breach of warranties and a negligent failure to recall.

L’Oreal is yet to respond to a request for comment from DailyMail.com.

In the National Institutes of Health (NIH) study published last week, researchers monitored around 33,000 women for more than a decade.

The rate of uterine cancer was 4.05 per cent in women who used straightening products four or more times a year compared to 1.64 per cent in those who didn’t.

Scientists said at the time ‘more research’ was needed to confirm the findings, but that the results were ‘concerning’.

There are around 66,000 new cases of womb cancer every year in the US, making it the most common cancer of the female reproductive system.

About 81 per cent of patients live for at least five years after their diagnosis, according to the American Society of Clinical Oncology.

But for black women the rate falls to 63 per cent, which experts say is because they are more likely to be diagnosed with an aggressive form.

[ad_1] Valerie Bertinelli is cringing. On Wednesday the actress was seen making faces on TikTik as she said she was ‘mortified’…

[ad_1] There’s nothing better than enjoying a fresh scone with your morning coffee or tea. Since fall is now in full…