Explosive court documents have revealed that Harmony Montgomery’s stepmom, Kayla, told cops in June that the girl’s father, Adam, had murdered the then five-year-old and encouraged her to help cover up the crime.

Harmony vanished sometime in late November or early December of 2019, and is believed to have been killed around the same time.

Cops were only made aware of her disappearance last fall.

An investigation led by the FBI subsequently ensued – and led cops to arrest Adam Montgomery in January 2022, in connection with a second-degree assault charge involving his daughter prior to her disappearance.

On Monday, he was charged with the murder of his daughter – nearly three years after her disappearance. He’s said to have punched the disabled youngster in the head. Harmony was blind in one eye.

Also on Monday, the prosecution filed a document in another case against the alleged child killer charging the felon with dealing stolen firearms which brought to light damning statements by his estranged wife.

‘During her June 3 interview, Kayla reported to police that Harmony had been murdered in December 2019 by the defendant,’ the Hillsborough Superior Court Northern District documents read.

‘Kayla also said that the defendant had encouraged her on multiple occasions to lie to police about Harmony’s whereabouts, basically giving Kayla a ‘cover story’ and telling her that as long as she stuck to the cover story everything would be OK.’ 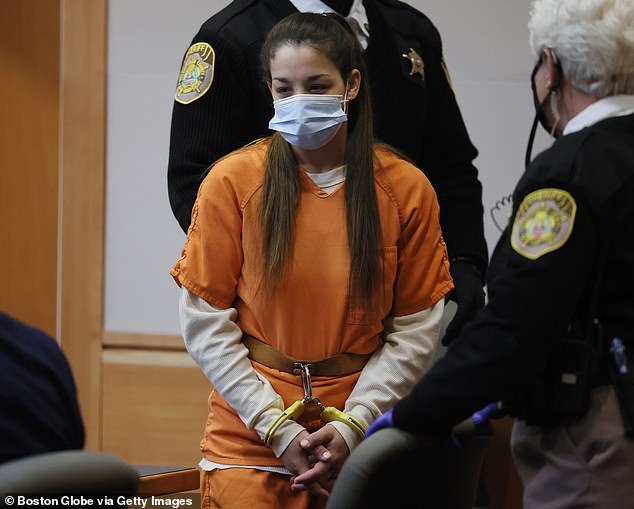 Explosive court documents have revealed that Harmony Montgomery’s stepmom, Kayla (pictured), told cops in June that the girl’s father, Adam, had murdered her 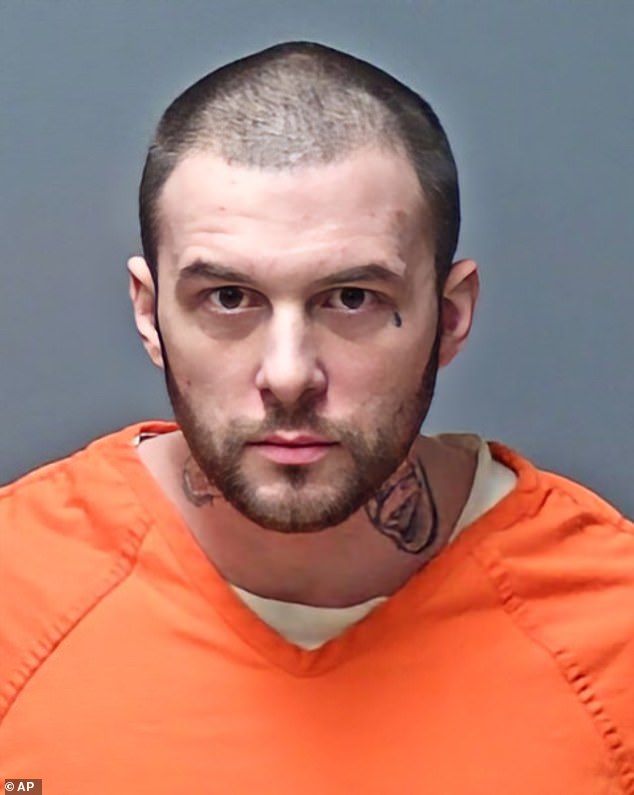 On Monday, Adam Montgomery (pictured) was charged with the murder of his daughter – nearly three years after her disappearance 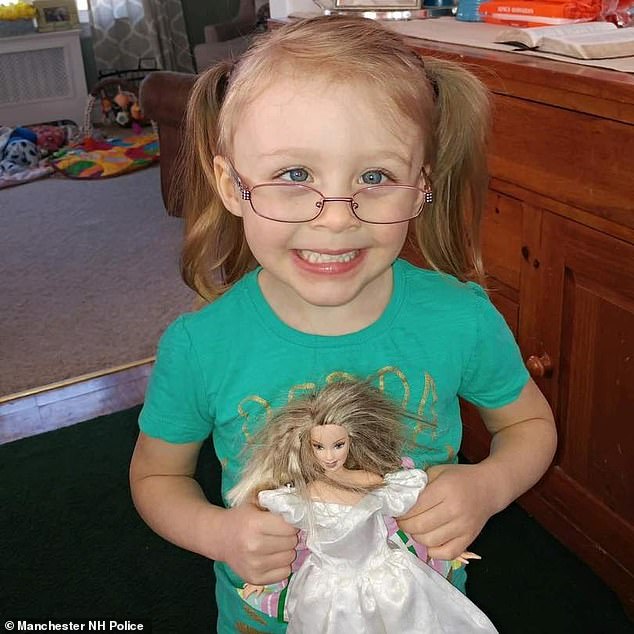 Adam Montgomery’s defense asked the judge earlier this week to preclude the estranged wife’s statements, accusing prosecutors of improperly delaying their disclosure by months in violation of discovery rules.

Kayla Montgomery is also facing charges in connection with the girl’s disappearance, including allegedly lying to a grand jury and collecting welfare payments on the missing girl’s behalf for months after her death.

During a Monday afternoon briefing in New Hampshire state court Attorney General John Formella accused Montgomery, 31, of ‘causing the death of’ his daughter during the 2019 encounter, ‘by repeatedly striking Harmony in the head with a closed fist’ at his home in Manchester, New Hampshire.

As a result, the jurist said, he is now charged with second-degree murder.

Other counts against Adam Montgomery include falsifying physical evidence, abuse of a corpse, and tampering with a witness, the proceedings further revealed.

The bombshell disclosure was several months in the making and serves as the first indication from investigators that Harmony, as many suspected, was murdered.

It also comes four months after DailyMail.com revealed members of the FBI stormed Montgomery’s home, hauling out evidence, including a fridge, from the apartment.

Harmony had lived with her father, and his convict wife Kayla Montgomery, in the weeks leading up to her disappearance.

‘I do want to again express my deepest sympathies to Harmony’s family, friends, and loved ones,’ Attorney General Formella said at the news conference Monday after making the revelations.

‘We understand that today’s news, while significant for purposes of this investigation, is yet another difficult moment for those who loved Harmony and those who have followed this case.’

Authorities investigating the highly-publicized case made waves in August when they declared they were investigating the New Hampshire girl’s disappearance as a homicide, after learning of it just months before, despite her disappearing more than two years earlier.

At the time, without elaborating, authorities said they believed Harmony was murdered in Manchester in early December 2019.

Those assertions seemed to be linked to the aforementioned search of the rental apartment Adam, Kayla and their children called home just days before Harmony’s proposed disappearance. 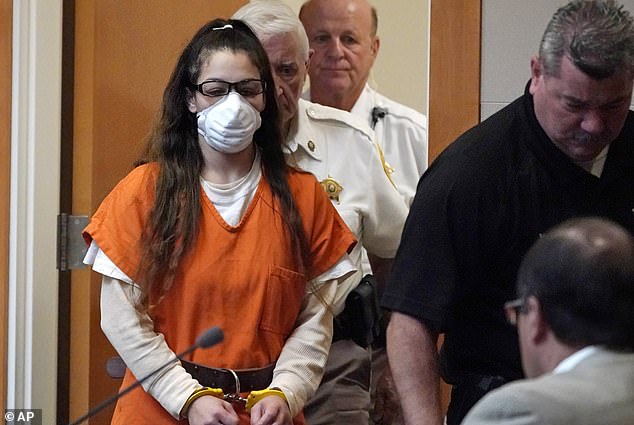 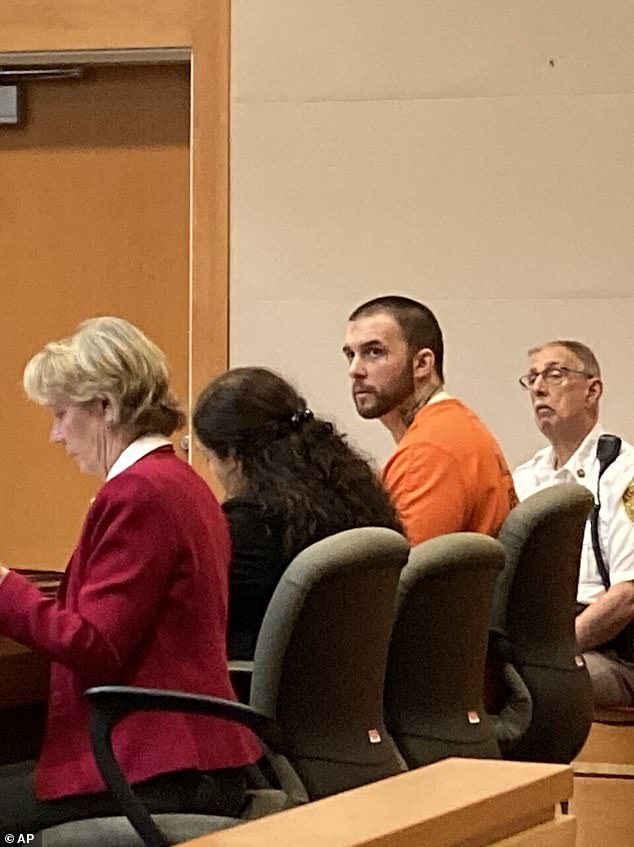 Cops had then been seen removing evidence, including a full-sized refrigerator, from the Manchester home, as well as a plethora of other items that were covered up in various packaging.

Authorities did not disclose what sparked the search – the second in a matter of months of the property.

Officials at the time, however, did concede that the Union Street home had become ‘the focus of the investigation.’

Harmony, who was blind in one eye, was in her father’s care at the time of her disappearance after her mother, Crystal Sorey, lost custody in July 2018 due to substance abuse issues.

Investigators revealed earlier this year that Harmony had been homeless and living out of a car with her family in the days before her disappearance, after being evicted from the Union Street apartment on November 27 – a date that falls within the span of the girl’s disappearance.

During that time, Harmony’s family was either living out of a silver 2010 Chrysler Sebring or a dark blue 2006 Audi S4.

Adam, meanwhile – who had come under suspicion of case workers of abusing Harmony in the months before her disappearance.

It has since been revealed he was also considered a suspect in the February 2008 killing of Darlin Guzman, a 28 year-old computer repairman who was fatally shot in the parking lot of a convenience store in Lynn, Massachusetts. 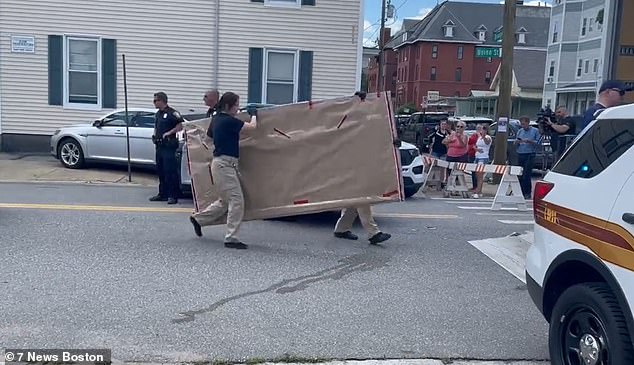 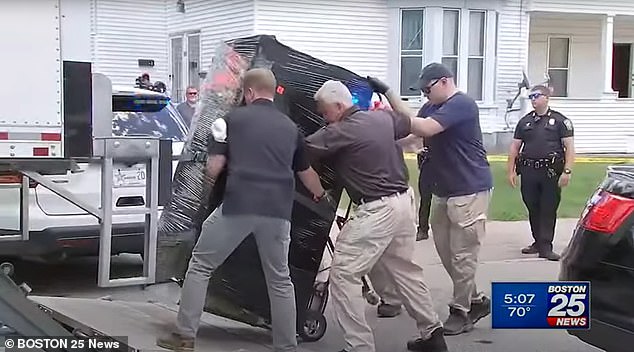 Cops had then been seen removing evidence, including a full-sized refrigerator, from the Manchester home, as well as a plethora of other items that were covered up in various packaging

Adam Montgomery has a criminal record that goes back to at least 2007.

Relatives have accused Adam Montgomery of abusing Harmony, causing case workers to visit the Manchester apartment multiple times in 2019, 2020, and 2021 – several coming after the girl was last seen.

Those visits saw the dad tell city officials the child had went to live with his mom.

Relatives, including Montgomery’s uncle, Kevin Montgomery, recounted incidents including spanking, forcing the then five-year-old to scrub the toilet with her toothbrush, and leaving her standing in the corner for hours, investigators say.

Kevin Montgomery told police his nephew once admitted to him that he ‘bashed her around this house’ during one instance in 2019, after the father reportedly found her trying to get her younger brother to stop crying while she was bathing him.

‘Adam told Kevin that he responded by striking [Harmony] in the face and causing the black eye,’ according to the affidavit.

Kevin Montgomery told police he reported the 2019 assault to the Department of Children of Children Youth and Their Families (DCYF).

A caseworker visited Montgomery’s home in July 2019 and found the claim Harmony had a black eye unfounded.

However, the family were ‘identified as high risk of repeat child welfare system involvement’ and were given referrals for housing supports, the review stated.

During a second visit that August, the worker noticed a red mark in Harmony’s eye and faded bruising under her eyelid.

The worker was told by Harmony and her father that the mark was caused by ‘horseplay with another sibling when a toy light saber struck Harmony Montgomery near her eye.’

Two other visits that year showed ‘the children appeared happy and healthy,’ the review said. The last visit was on October 1, 2019.

The division didn’t have contact with Adam Montgomery again until January 2020. When asked about Harmony, he said the child was living with Sorey in Massachusetts.

A child protective services worker left a voicemail for Sorey, but the call wasn’t returned and there is no evidence of any additional attempts to contact her, the review said. 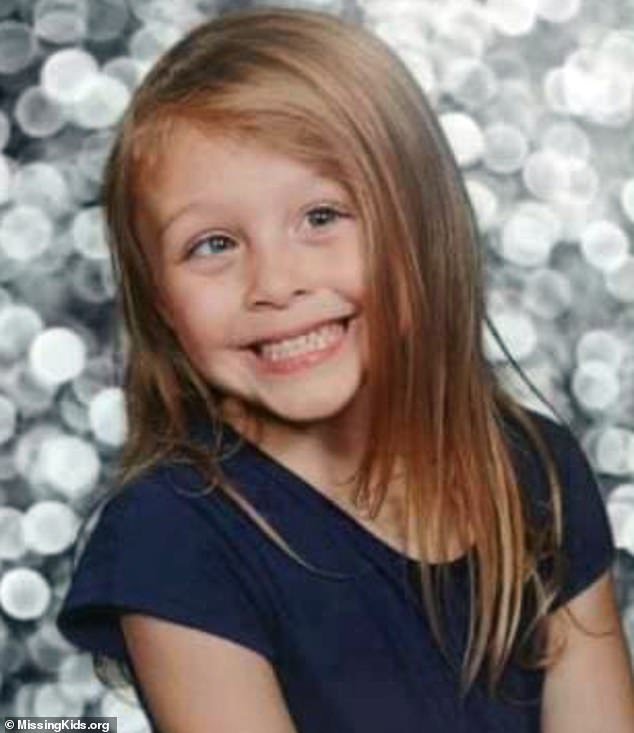 Harmony disappeared between November 28 and December 10, 2019, while she was living with her dad at the residence, a second-floor apartment 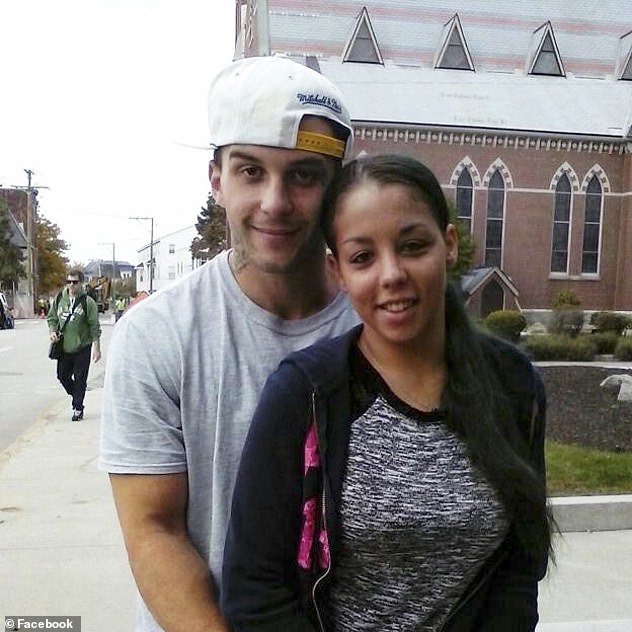 Harmony had lived with her father, and his convict wife Kayla Montgomery, in the weeks leading up to her disappearance 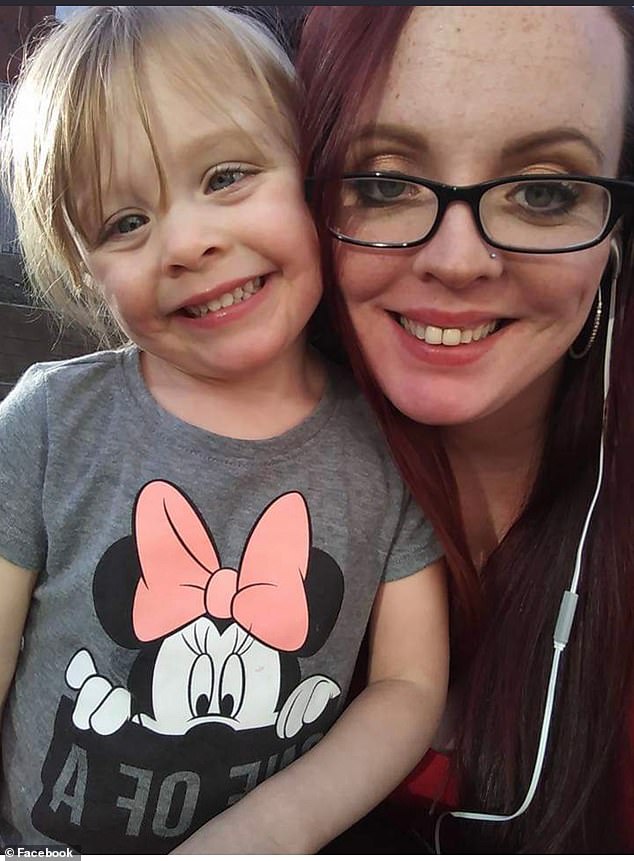 Harmony was born in June 2014 while her father was incarcerated as he awaiting trial for allegedly shooting a man in the head during a drug deal.

Sorey attempted to care for her newborn daughter while battling her substance use disorder, but despite her efforts, DCYF received three reports of neglect the month Harmony was born.

Investigators attempted to provide service to Sorey, however, the neglect continued, with two additional reports filed in August 2014.

Officials determined the infant’s well-being was at risk and she was removed from Sorey’s care.

Harmony was placed in a foster home for the first time and officials worked to develop an action plan for Sorey. 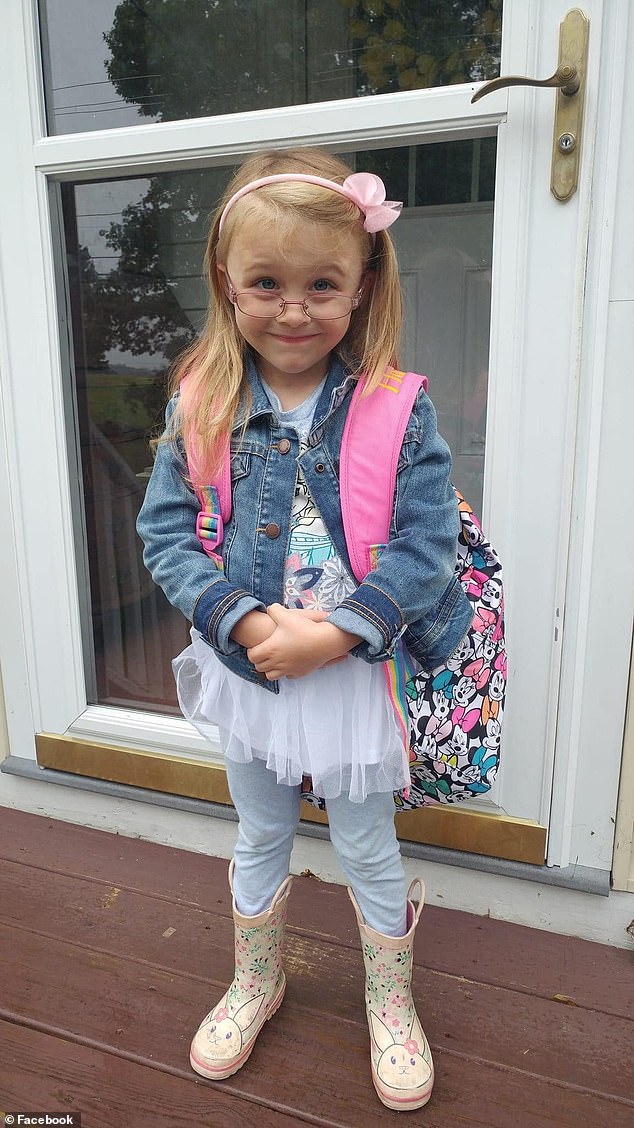 Almost three years after Harmony was placed in Adam’s care, on December 31, 2021, the city of Manchester, New Hampshire police announced seven-year-old Harmony’s disappearance and their search for her

In September of that year, DCYF devised an action plan with Adam Montgomery, while he was incarcerated, indicating he would engage with offered programs to help with parenting, substance use disorder, and anger management.

Officials made numerous attempts to contact Adam about the plan but he did not respond the report states.

When DCYF finally connected with Adam in December 2014 he issued support for Harmony to return to Sorey’s care. He also asked for a visit with Harmony.

The convict met his daughter for the first time in January 2015, when she was six months old, during a supervised visit with her DCYF care team. Immediately following the visit, Harmony was placed in Sorey’s care but remained under the custody of DCYF.

Approximately four months later, Harmony, then 10 months old, was returned to foster care after Sorey failed to maintain the requirements of her action plan.

Harmony remained in foster care until March 2017 when she was placed back in Sorey’s care, but still under the custody of DCYF. The girl’s mother had met with DCYF workers on numerous occasions to monitor her progress and readiness to act as Harmony’s guardian.

In January 2018, Harmony, now three-and-a-half, was removed from Sorey’s care for the third time due to her relapsing. She was placed back into foster care.

In August 2018, Adam resumed supervised visits with Harmony, then four, after having not visited with her for the prior eleven months.

He was granted guardianship of his daughter in February 2019, where she seemingly resided until her disappearance.

State officials have since discerned that the girl, who would now be 8, was repeatedly failed by the Massachusetts child welfare system since infancy, being placed in the care of violent criminal Adam Montgomery despite opposition from her caseworkers.

Officials also failed to prioritize Harmony’s medical and special needs when making decisions about her guardian, which the state said in a scathing report penned by Massachusetts Department of Children and Families should have been ‘central to the decision-making’.

‘Harmony’s needs, well-being and safety were not prioritized,’ Massachusetts child advocate Maria Mossaides said during a press conference in May.

‘This beautiful young child experienced many tragedies in her short life, and that by not putting her needs first, our system ultimately failed her.’