Matt Hancock was seen dry heaving as he tucked into camel penis, sheep vagina and cow’s anus during the infamous, gruesome eating trial on Friday night’s episode of I’m A Celebrity… Get Me Out Of Here!

The former Health Secretary, 44, was voted to take on the La Cucaracha Café challenge alongside Boy George, 61, who threatened to quit the show this week after the politician arrived in camp.

MP for West Suffolk Matt said before heading into the challenge area: ‘I’m so glad to be doing it with someone else. It just lowers the pressure a bit,’ while George told hosts Ant and Dec that he was ‘pretty hungry’. 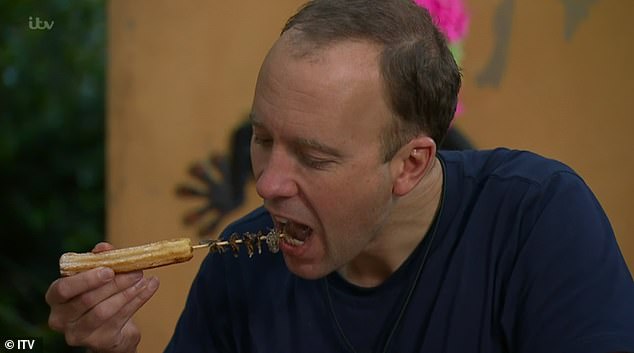 Tough: Matt Hancock was seen dry heaving as he tucked into camel penis, sheep vagina and cow’s anus during the infamous, gruesome eating trial on Friday’s episode of I’m A Celebrity

Matt’s first dish was Fish Eye Tacos, with the government employee being tasked with eating one, which contained three raw fish eyes.

He looked shocked as he chewed the fish eye which popped as he bit down on it in his mouth. 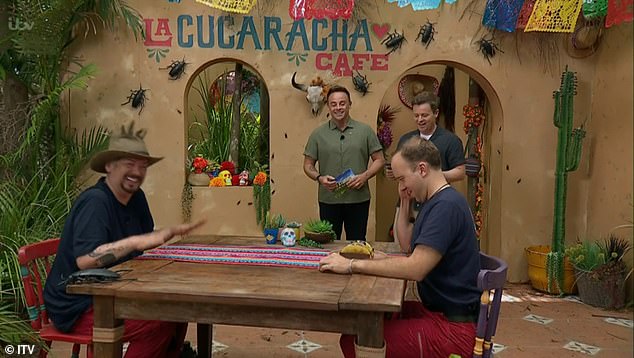 Infamous trial: The former Health Secretary, 44, was voted to take on the La Cucaracha Café challenge alongside Boy George, 61

However, he swallowed it straight down with a loud gulp, calmly describing it as ‘very fishy’.

George was then tasked with eating Queazy Nachos which he chowed straight down while Matt drank a glass of blended fish guts.

Moving on, Matt ate a Witchetty grub, which he described as ‘absolutely disgusting’, complaining that the texture was ‘awful’. 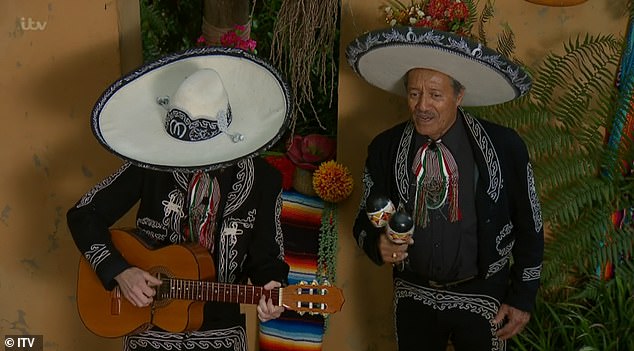 Music to their ears: The pair were joined by a pair of musicians who played Mexican music as they ate their jungle delicacies

George then ate a Fermented duck which he compared to smelling like a ‘fart’, saying: ‘Sue Cleaver did a fart the other day which smelt like charcoal. It was just like that.’

As George bit into an enchilada, nicknamed Stenchilada, packed with vomit fruit, George told Matt: ‘It’s a good time to tell you I’ve never voted Tory,’ before Matt was tasked with eating a sheep’s vagina.

Dec said: ‘He’s enjoying it,’ as Matt quickly swallowed the item down. 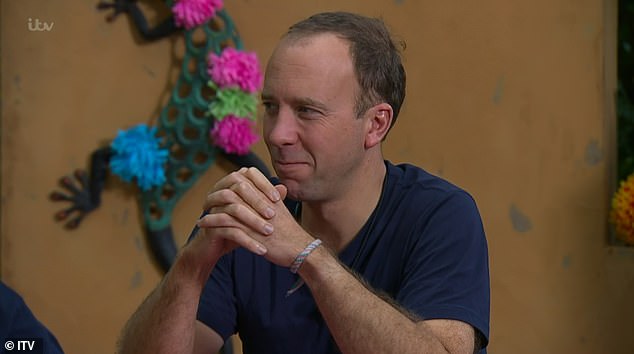 Ready for anything? MP for West Suffolk Matt said before heading into the challenge area: ‘I’m so glad to be doing it with someone else. It just lowers the pressure a bit’ 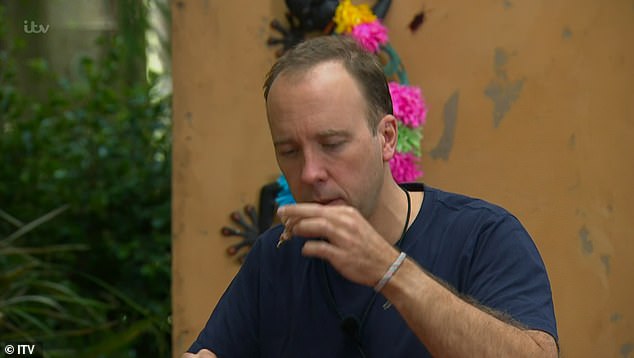 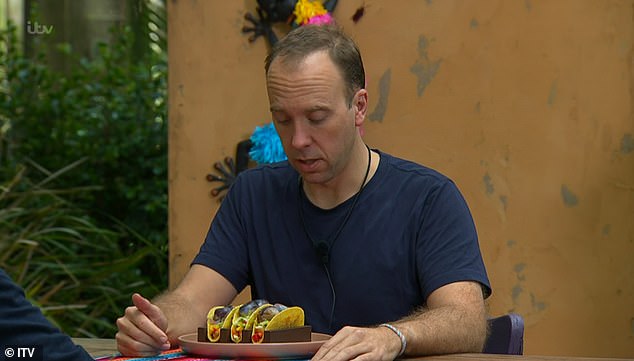 Disgust: He looked shocked as he chewed the fish eye which popped as he bit down on it in his mouth

George moved on to fermented plums, with the singer being told by the hosts he had to eat six.

Dec said: ‘Hang on, something’s stopped him in his tracks,’ to which George exclaimed: ‘The taste!’

As he heaved, George added: ‘I really didn’t think I was going to gag but that’s making me want to vomit.’

Matt was then handed cow’s anus, which prompted George to giggle from behind his hands. 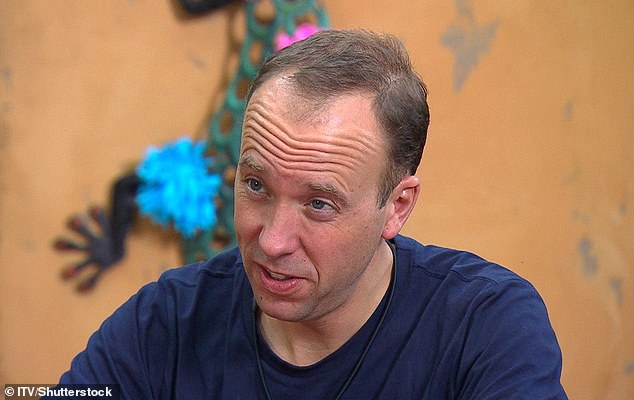 Game: Matt swallowed the Fish Eye Tacos straight down with a loud gulp, calmly describing it as ‘very fishy’

The politician said: ‘I’ll just have to pretend it’s some funny kind of steak,’ adding: ‘I don’t recommend it as a main course!’

George was handed fermented tofu and was told he had to eat six pieces, prompting him to almost throw up, while declaring: ‘That’s disgusting!’

For their final dish, Matt was handed cockroaches on a stick along with a blended cockroach dip, while George was given Deep Sea Salsa, which was fermented seaweed. 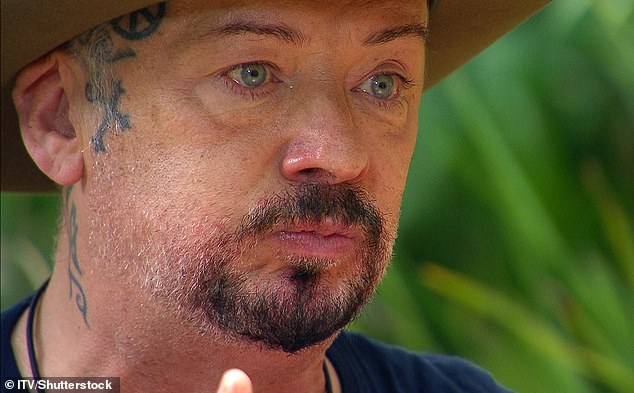 Keeping it down: George was seen dry heaving as he ate a variety of vegetarian dishes in the challenge, including vomit fruit

Eating them all in one, Matt was seen heaving before swallowing all the cockroaches down.

George’s eyes were seen watering as he attempted to eat hi seaweed, before he declared: ‘Did it!’

The pair won 11 stars for camp, with George saying: ‘I wanted to do a food trial but it was a lot worse than I thought. 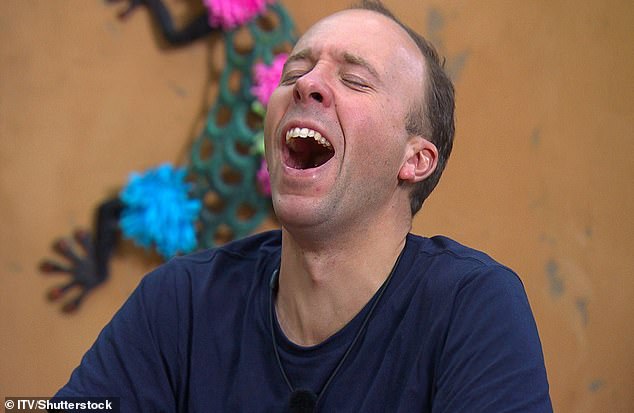 Landslide vote: Matt, who’s completed three trials in as many days, was chosen by the public in their thousands after viewers plotted to see the MP eat genitalia

A TV insider told MailOnline ahead of the show that Matt, who’s completed three trials in as many days, was chosen by the public in his thousands after ITV viewers plotted to see the MP eat genitalia in the show’s infamous eating trial.

A source said: ‘Matt and George do not disappoint in tonight’s show.

‘They gave the eating trial everything possible – and the tension between them only added to their determination, there was no way George was going to let Matt do better than him.

‘All the public wanted to see is Matt eating penis and anus and they’ve finally had their way and it’s great TV, it’s literally a laugh every minute.’

Matt didn’t face the trial on Friday night alone, as former Culture Club star George was made to consume vomit fruit and a fermented plum, as bosses catered to his vegetarian needs.

There’s a common misconception that vegetarian dishes at the eating trial are easier to stomach but George, whose eyes streamed with tears as he dry heaved at the horrific taste, confirmed that isn’t the case.

George joked: ‘I can eat anything’, while Matt cackled with laughter as the pair faced their fears to win a potential 11 stars for camp.

Since his controversial arrival in the Australian jungle, Matt has already undertaken three Bush Tucker trials – with viewers expected to continue voting for the MP.

The camp erupted into laughter when hosts Ant and Dec announced that Matt would be doing his third trial, with the cast expecting that the father-of-three will be a target for the voting public.

Matt won all 11 stars in Tentacles Of Terror and also competed with Seann Walsh, 36, during Beastly Burrows, where they earned six meals for camp.

Earlier in the show Coronation Street actress Sue Cleaver was left red faced for ‘slagging off’ Boy George after accusing him of stealing her towel only to find he had folded it up for her.

It seems tensions are rising for the celebrities in their first week in the jungle as the 59-year-old soap star jumped to conclusions when she couldn’t find her towel in the sixth episode of the series.

But besides George, other campmates have noticed that they have to be careful ‘not to feel the wrath of Sue’ after Matt Hancock left a bowl full of water and shaving foam in the dunny.

George meanwhile was chanting in the jungle – but fellow campmate Mike asked: ‘Are you OK Sue?’, and Sue told him: ‘No, I’m not Mike, someone’s stolen my towel!’

From the dunny, Sue called to Boy George: ‘George! You haven’t seen my towel have you?’

Admitting her error to Charlene she laughed: ‘I’ve been slagging him off, “Bet George has nicked it”.’

In the Bush Telegraph, Sue confessed: ‘Boy George had folded it up for me… But I am standing by the fact that if something is taken, it’s usually George.’

Mike said: ‘I connect really well with Sue because she’s a no-nonsense lady who says what she feels. I like that, it’s no reading between the lines a lot of the time. It’s straight in front, which is quite nice.’

Seann added: ‘You’re going to feel the wrath of Sue.’

Sue returned to camp announcing: ‘Matthew…’, and Matt already knew what to say: ‘I’m so sorry, I left a bowl full of water.’

Sue explained: ‘You left a bowl full of water with shaving foam in, you also left the head of your razor and the wrapper. Litter in the jungle. I’ve done it this time…’

Matt responded: ‘You won’t be doing it again.’

On Thursday night’s show, Matt admitted that he ‘messed up and fessed up’ to his lockdown rule-breaking affair, where he was caught kissing Gina Colandangelo, 45, in his ministerial office last year.

Speaking for the first time about the famous clinch, he said: ‘I messed up and I fessed up. I resigned and it’s no excuse, but I fell in love, right? That also had a lot of other consequences obviously.’

Comedian Babatunde Aleshe, 36, told Matt, ‘You didn’t just “fall in love”, you were grabbing booty bruv!’ before the politician replied, ‘Oh give over.’

Matt, whose romance with Gina ended his 15-marriage to estranged wife Martha, said seeing his girlfriend at the end of the red bridge will be ‘the best thing about being kicked out the jungle.’ 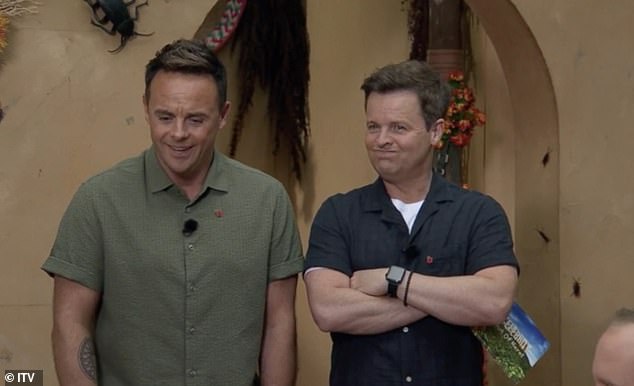 The camp erupted into laughter when hosts Ant and Dec announced that Matt would be doing his third trial, with the cast expecting that the father-of-three will be a target for the voting public