Just Stop Oil have evaded police to climb onto another motorway gantry again today – despite choosing the same time and the exact same method for their protest.

Fed-up drivers ignored smart motorway markings to go into closed lanes in a desperate attempt to get to work.

The eco-zealots, who widely publicise their activities, want an end to the use of fossil fuels for the sake of the environment.

Protester Charlotte Kirin, 53, a social worker and parent from Bury St Edmunds: ‘In order to survive, we need to take action to stop new oil and gas.

‘For as long as the government pretends this isn’t the priority, I will do what I can to demand a response.

‘History shows us that we have to challenge unjust laws.

‘What is being done to people all over the globe in the name of profit is the greatest imaginable injustice.

‘I will not turn my back on people whose lives are being destroyed for rich mens’ profit.’

Edred Whittingham, 25, a student from Cambridge said: ‘Politics is broken in this country, and it’s up to everday people to fix it. We are living in a time when millions of people are literally going hungry or freezing to death in their homes, while fossil fuel companies are making record profits. We can change this, but we need to resist.Climate change will destroy the global food system while displacing hundreds of millions of people from their homes, leading to starvation, war and social unrest. For our government to be still approving new fossil fuel projects is an act of genocide.’

Molly Berry, 70, a retired lip-reading tutor from Hertfordshire said: ‘The climate crisis is not left wing or right wing, it’s not an opinion or a point of view or a cause. It’s real, and it’s happening now, and it is getting very close to destroying absolutely everything we love. When my friends show me photographs of their grandchildren it breaks my heart to think of what they will face in their lifetimes. That’s why I am willing to put my liberty on the line to demand that the government halts all new oil and gas.’ 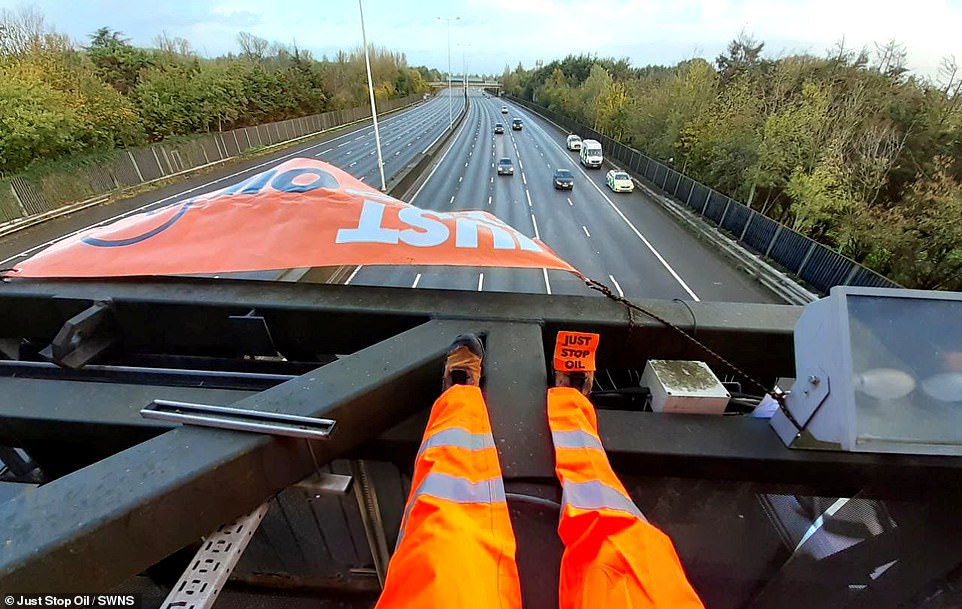 Proud of themselves: Just Stop Oil proudly posted their latest stunt in an embarrassment for police who failed again to stop it 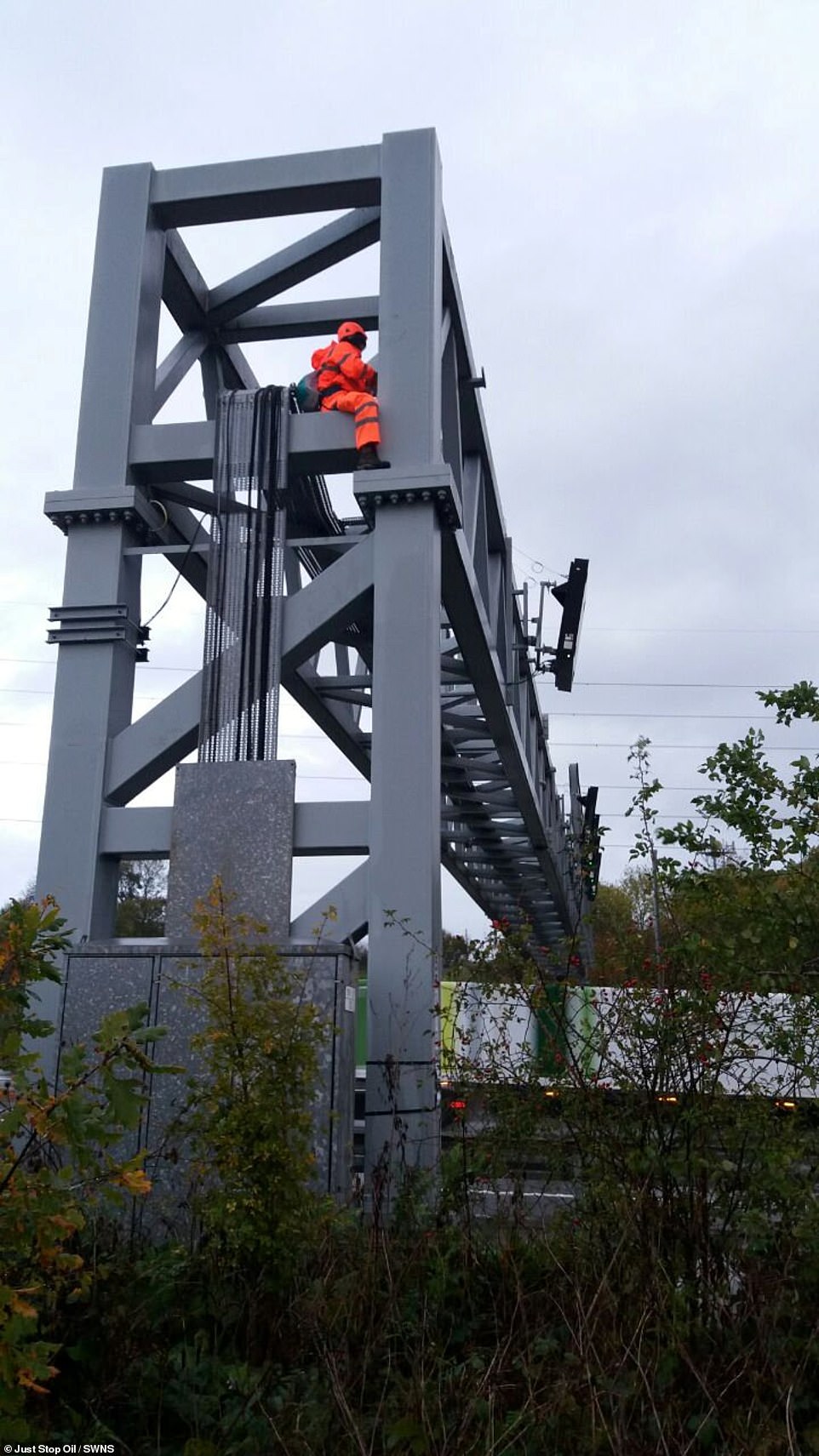 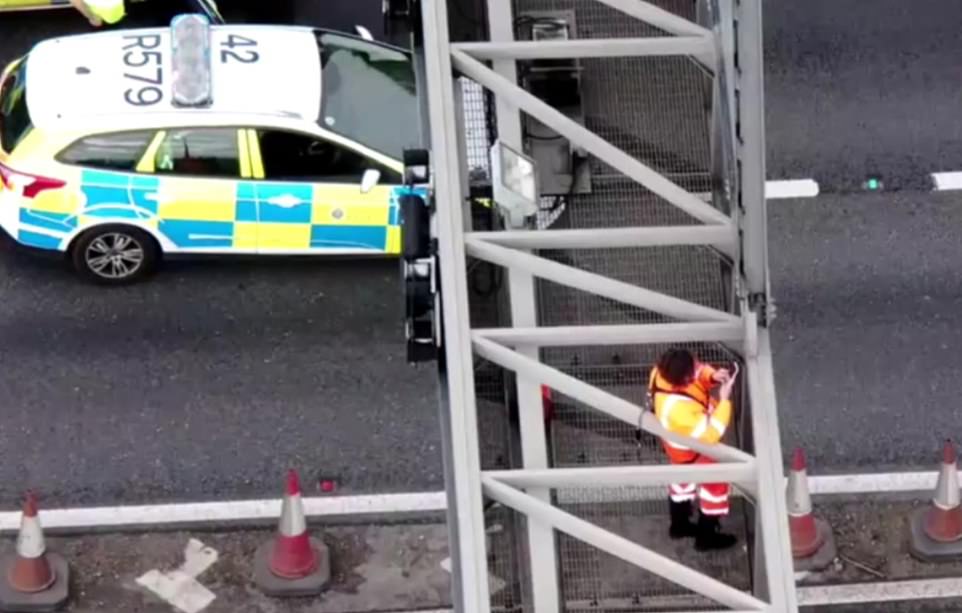 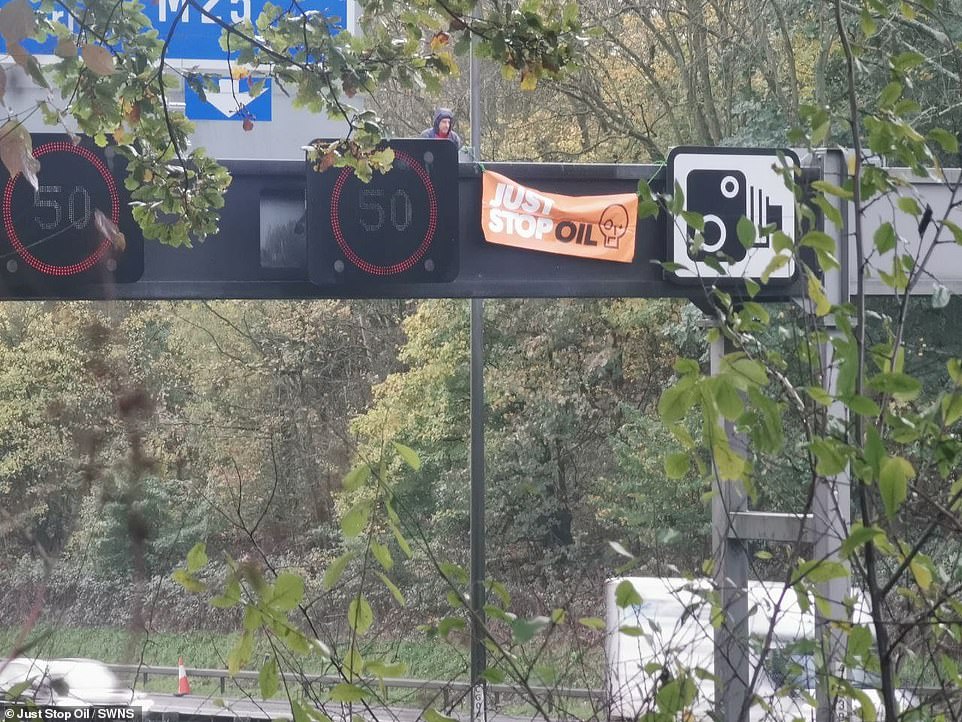 From 7am this morning, approximately 15 supporters of Just Stop Oil climbed onto the overhead gantries of the M25 in multiple locations, both clockwise and anti-clockwise causing police to halt traffic 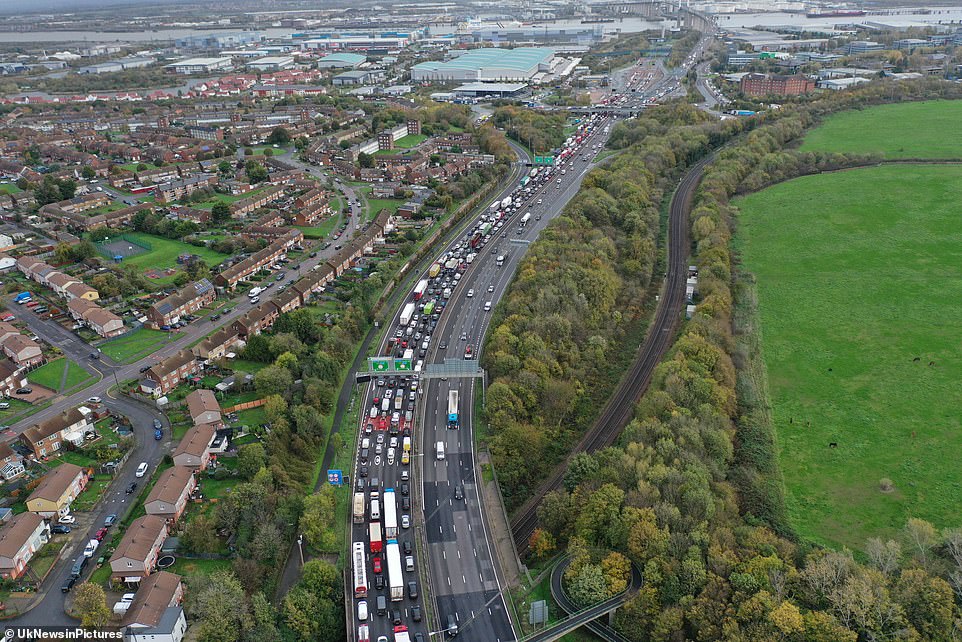 Essex Police said their morning:  ‘We are currently on scene at the north-bound track of the M25 at the Dartford River Crossing where a protester has climbed on to the gantry at junction 31.

‘Dartford tunnel and two lanes are closed. We are working as quickly as we can to keep you moving.’

There are also protests at junction 20 in Hertfordshire, with police admitting: ‘We are responding to reports of protest activity at junction 20 (Kings Langley) of the #M25.

‘Officers are at the scene. Please avoid the area and seek an alternate route where possible. We’ll update you as soon as possible.’

Surrey Police also leaped into action – after the protester had got onto the gantry.

The force tweeted: ‘Officers are on scene and dealing with protesters who have climbed on to motorway gantries between J8-9 and J12-13 along the M25 this morning.

‘Traffic is currently stopped in both directions at these junctions. Thanks for your patience, we’ll update as soon as possible.

‘Officers are also on scene between J7-8 where a further protester has climbed on the motorway gantry.

Yesterday police made 35 arrests after motorists were held up for five hours when protesters scaled a gantry on the M25.

The Met and officers from other forces moved in after more than a dozen protesters forced the closure of several sections of the M25 during the morning rush hour – despite a court order barring them from disrupting the motorway.

An ambulance was allegedly among the vehicles stranded by the stunts, which meant the emergency vehicle took ‘ages and ages’ to get through the blockage, according to another trapped motorist.

The arrests came after Just Stop Oil activist Louise Harris yelled through unconvincing tears: ‘You might hate me for doing this,’ as she scaled a gantry. 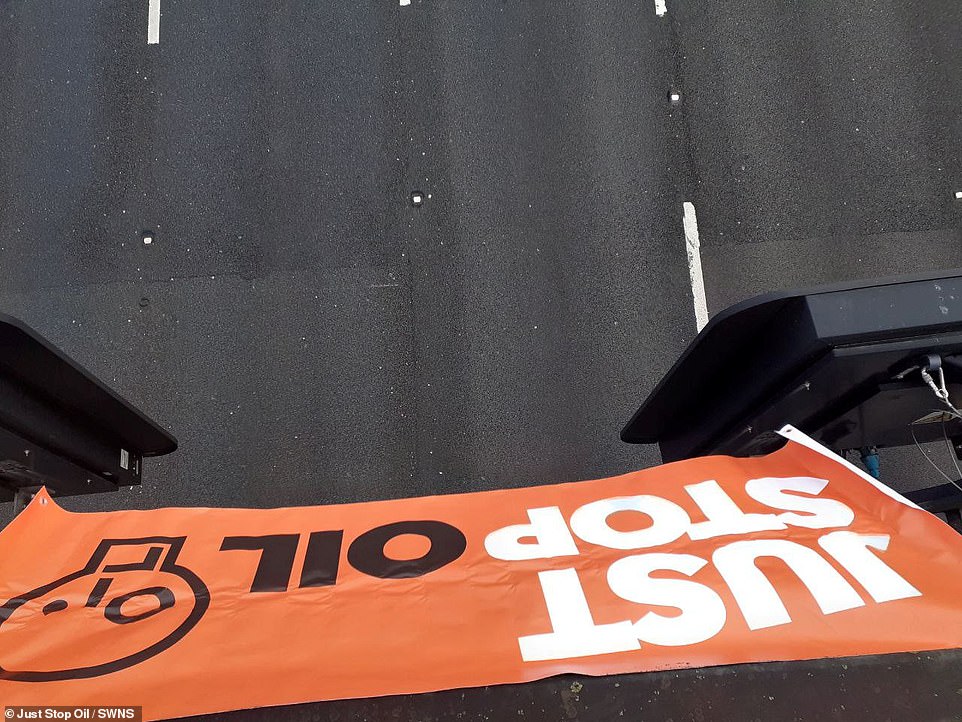 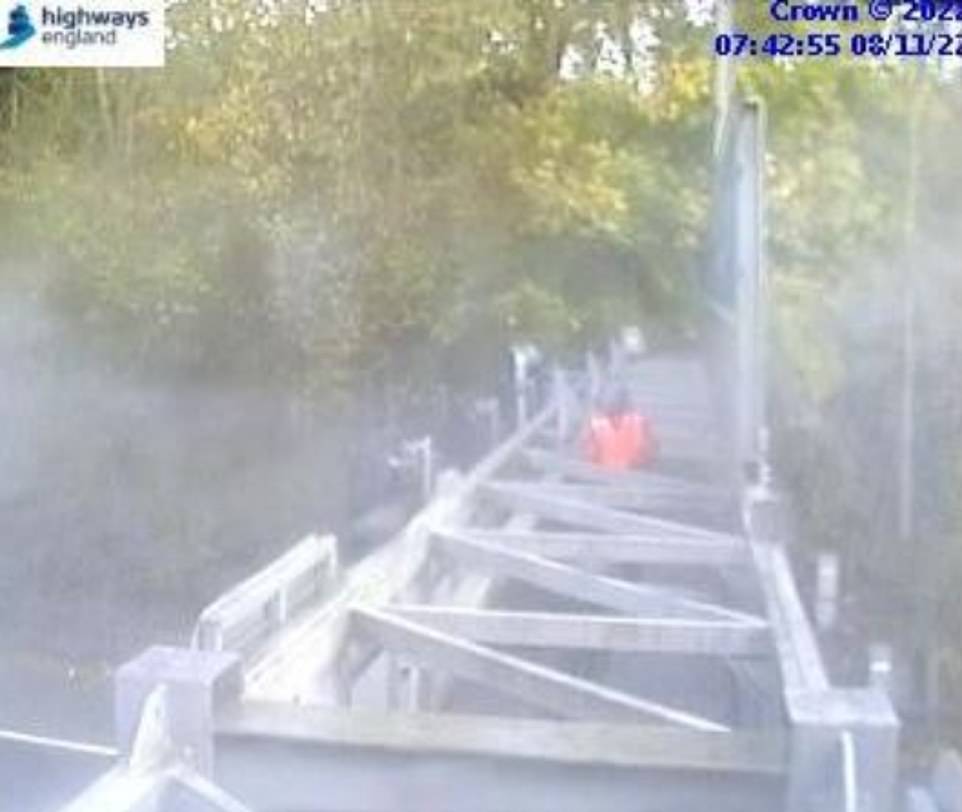 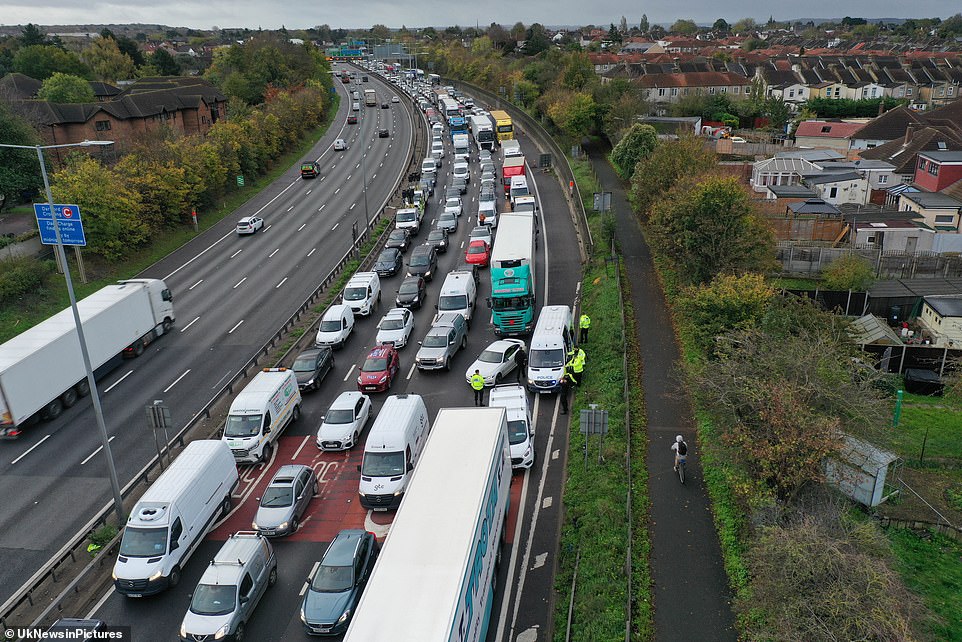 The court has granted a further injunction which aims to stop unlawful demonstrations on the M25, which encircles Greater London, in an attempt to end disruption to the busy road by the environmental group.

It means that anyone entering the motorway and fixing themselves to any object or structure on it, and anyone assisting in such an act, can be held in contempt of court.

They could face imprisonment, an unlimited fine, and the seizure of assets.

The injunction was secured in addition to a court order obtained by National Highways earlier this year that targeted protesters including those from Insulate Britain.

National Highways’ existing injunction covers the M25, the M25 feeder roads and major roads in Kent and around the Port of Dover until May 2023.

Commuters trying to get to work expressed their frustration on social media, on a day compounded by chaos on Britain’s rail network. Planned rail strikes for Saturday, Monday and Wednesday were called off on Friday – but train companies are running a reduced service because not enough drivers were rostered on.

Harris, a wannabe popstar who previously compared herself to a prisoner of war after football fans pelted her with drinks when she stormed onto the pitch during a match, was one of the activists taking part.

Appearing to choke up in a video filmed from the gantry, she shouted: ‘Hello, my name is Louise, I’m 24 years old and I’m here…I’m here because I don’t have a future.

‘And you might hate me for doing this and you’re entitled to hate me. But I wish you would direct all that anger and hatred at our Government.

The protests took place despite a major Metropolitan Police operation to foil their plans, which saw a number of demonstrators, including leader Roger Hallam, arrested last night.

National Highways was also granted a court order which was meant to put an end to disruption on Britain’s busiest motorway.

But the controversial campaigners, who carried out a full month of action in October, were back in force this morning, much to the fury of frustrated drivers.

Most protesters were brought down by police within around an hour.

[ad_1] Elon Musk is considering firing large numbers of Twitter employees on Saturday, according to a report – in order to…