The thing I say most often, almost every day, is not, ‘My dad fought the Nazis’, or, ‘I’m not a 1950s housewife’ to delivery drivers and men who try to enter my house with their shoes on. Although I do say both of those things quite often. No, it is this:

‘How do people with children possibly manage? With providing food, every day. And heating the house, clothing them? Doing laundry, every single day! Driving them places?’

Growing up, I didn’t really give a thought to how on earth my parents fed and clothed seven children. Especially given my dad was in the army, then worked for the NHS, and my mum never had a job. Lack of money only entered my consciousness twice: once, when Mum revealed she was too scared to go to the grocer, Thomas’s, as she owed them £60.

And second, when I was on a school trip to St Paul’s Cathedral. My orange squash wasn’t in a proper container, so it leaked (a tin of Coke was deemed too expensive), and I didn’t have the two shillings required to climb up to the Whispering Gallery, so had to stay, parked on a pew, on my own. 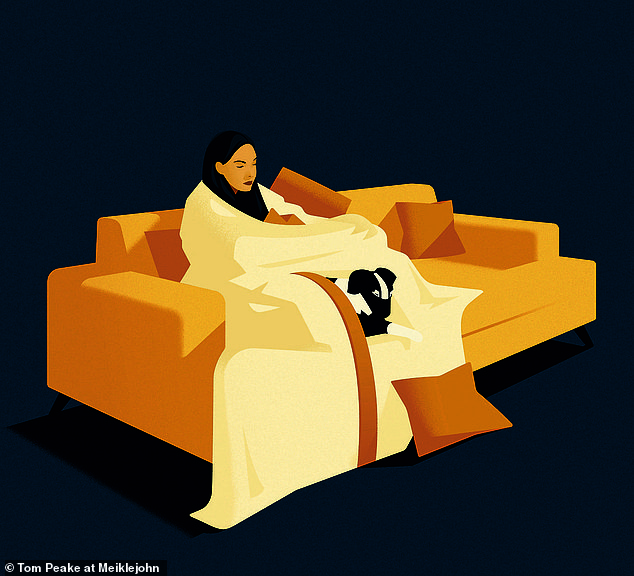 ‘Until you are in financial difficulty, I don’t think anyone appreciates the horror that comes with it,’ Liz Jones writes

There were some slightly chippy reviews when my memoir was published, saying I wasn’t properly poor as I had riding lessons as a child.

No one appreciates the horror that comes with financial difficulty

They seem to have skirted over the part that described how I took a job washing up in a pub to pay for lessons, wore second-hand jodhpurs, and plimsolls rather than riding boots.

We had no central heating: just a coal fire in one room, which my mum never lit until after 6pm.

There were hooks on the outside of the sitting room door, so you could put your coat back on whenever you had to brave a trip to the chilly bathroom. I was so cold in bed – despite a hot water bottle, which mottled my thighs – that, in order to read a book, I had to alternate my hands: one holding the book until it froze, to be replaced with the hand hiding between my thighs.

I am saying ‘How do people with children manage?’ as I have been emailing back and forth with Octopus, my electricity provider. Since moving into my two-up, two-down cottage at the end of 2018 I’ve paid £325 a month by direct debit, which seems a lot, given I am just one person (although, given I’m not allowed to place a washing line in the garden, I do use a tumble dryer).

I never understood the mania for these companies to stop sending quarterly bills for whatever has been used, but still. I complied.

Given they don’t pay interest to borrow my money, I emailed and asked for £500, the maximum, to be credited to my bank account. Someone got in touch and asked me to send photos of the meter readings, clearly showing the serial number.

I did as I was asked, even though I was tempted to reply, ‘I don’t work for you.’

Yesterday, I received this: ‘Dear Miss Jones. Thank you for the readings. You are currently £12,000 in debt to us. Love and power, the Octopus Energy Team.’

I’m thinking of ringing up Liz Truss, asking why she kept repeating, robot fashion, ‘No one will pay more than £2,500 a year.’ Of course, we now know, though she didn’t bother to elucidate, she meant ‘No average household.’ But I’d have thought I was below average, not above. I tell them it must be a mistake. They agree to send an engineer to check the meter, but if it isn’t faulty, they will add £80 to my bill.

Until you are in financial difficulty, I don’t think anyone appreciates the horror that comes with it. The threats. The indifference. The sleepless nights. The blame. Even from intelligent people who should be on your side: people you pay, colleagues, friends, family, partners.

You live in constant fear that something will go wrong. Small things floor you: a chipped mug, when you only own two. You burn the last slice of bread.

[ad_1] Back in July, she gave birth to her first child, a beautiful baby girl named Mila. And on Thursday night,…

[ad_1] You know all those hours you log in at the gym and the small fortune you’re dropping on skin cream?…

[ad_1] Her character Carrie Bradshaw is synonymous with designer heels, with the columnist spending an estimated $40,000 on heels. But Sarah…