A survivor of the 2017 Manchester Arena bombing says ‘big mistakes’ were made on the night of the attack, as families of the victims prepare for the release of a report today into the response of the emergency services.

Speaking on the eve of the report – which it is anticipated will be critical of the reaction of emergency services to the bombings – survivor Ron Blake said those in charge had ‘got it all wrong’ on the night of May 22, 2017.

Mr Blake was injured in the suicide bombing, carried out by Islamist extremist Salman Abedi at the end of an Ariana Grande concert.

The attack killed 22 people and injured hundreds of others, many of them young fans of the American singer as well as parents who had arrived to pick them up.

Despite being injured in the blast, Mr Blake attempted to save the life of fellow bombing victim John Atkinson by using his belt to try and stem his bleeding.

Mr Atkinson was not seen by paramedics for 47 minutes, which Mr Blake said ‘seemed to last forever’. The 28-year-old later died of his injuries.

Speaking to the BBC ahead of the release of today’s report, the second of three examining Abedi’s radicalisation, the build up to the attack and the reaction of emergency services, said he believed those in charge ‘got it all wrong’. 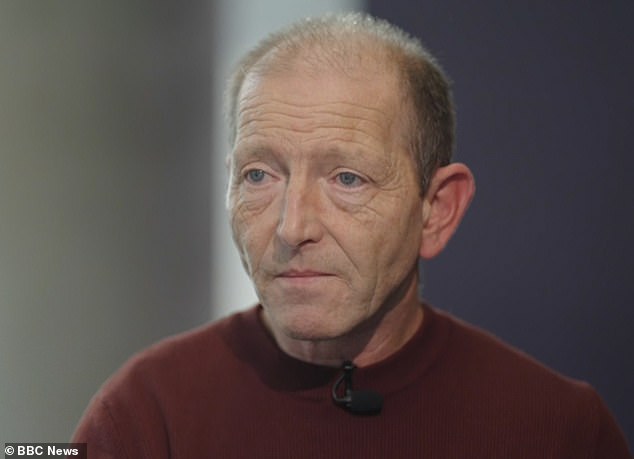 Speaking on the eve of the report, which it is anticipated will be critical of the reaction of emergency services to the bombings, survivor Ron Blake (pictured) said those in charge had ‘got it all wrong’ 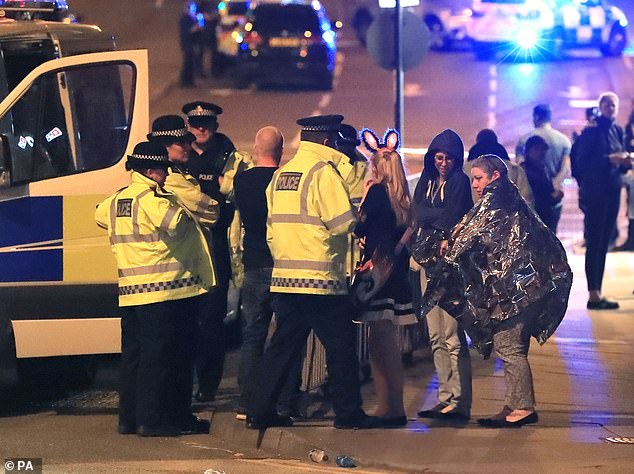 Twenty-two people were killed and hundreds were injured in a suicide attack at the end of an Ariana Grande concert on May 22, 2017. Pictured: Police at the scene of the attack 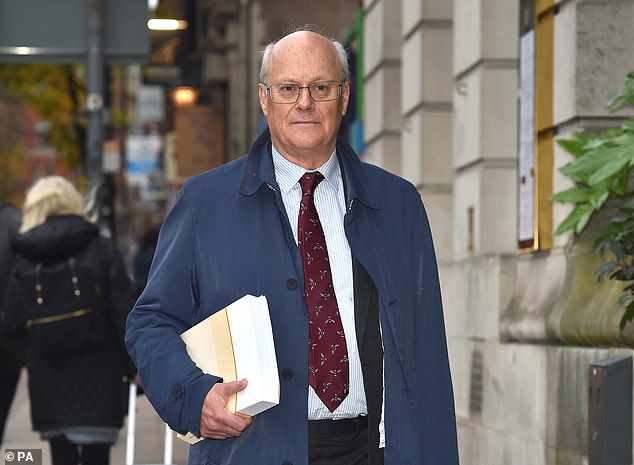 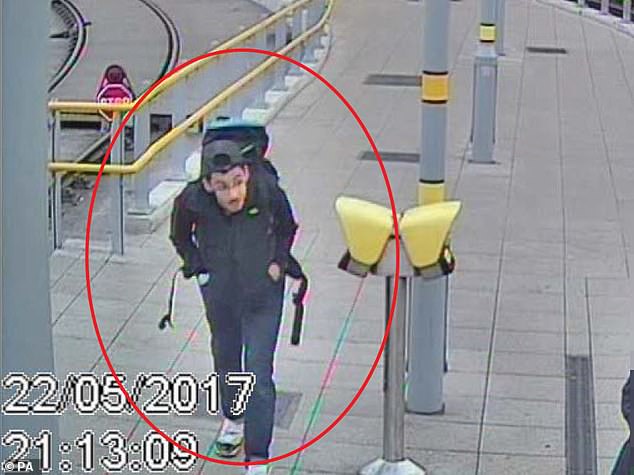 The hearings began and ended with a minute’s silence to remember the 22 victims of the blast, set off by radical Islamist suicide bomber Salman Abedi (pictured)

It comes as an ex-terror officer claimed last night, on the eve of the report being published, that there was a ‘perfect storm of failures’ surrounding the attack.

Andrea Bradbury, a retired counter terrorism police inspector who was herself injured in the 2017 blast, said emergency services were ‘unprepared and totally caught off guard’ by the bombing.

The 22 victims of the Manchester Arena bombing in May 2017

More than 150 of the victims and bereaved families are preparing civil claims against authorities.

Alongside looking at the response of emergency services, Thursday’s report by Manchester Arena Inquiry chairman Sir John Saunders will also focus on the experience on the fateful night of each of those who died.

Evidence into the circumstances leading up to and surrounding the atrocity was heard in the city between September 7 2020 and February 15 this year.

The hearings began and ended with a minute’s silence to remember the 22 victims of the blast.

Their photographs were displayed in the hearing room at Manchester Magistrates’ Court at the start of the public inquiry as their final movements were outlined – where they were when Abedi, 22, detonated his bomb in the City Room foyer, the extent of the medical treatment given and the details of their injuries.

It was agreed that 20 of the victims sustained unsurvivable injuries in the blast.

John Cooper KC told the inquiry that care worker Mr Atkinson did not survive because he did not receive ‘effective, timely intervention for his entirely treatable injuries’.

He said: ‘Reduced to its simplest, in John’s case there were two issues that took away his chance of recovery: the lack of medical expertise and equipment within the City Room, and the delay in his evacuation to the casualty clearing station and onwards to hospital.’

Pete Weatherby KC, for the family of Saffie-Rose, told the inquiry: ‘We do not doubt that Saffie suffered a high burden of injury and no one suggests she would necessarily have survived whatever interventions were applied.’

But he said none of her injuries were unsurvivable individually and the evidence suggests ‘she went into cardiac arrest because her blood circulation volume fell below a critical level.’

He argued she may not have gone into cardiac arrest if pre-hospital treatment had allowed her blood volume levels to increase and that timely interventions could have dealt with lung and bleeding injuries.

North West Ambulance Service (NWAS) submitted there were no inadequacies in its response that contributed to Mr Atkinson’s death and that all personnel who attended him ‘did their best to assess, treat and convey him to hospital as soon as possible in extremely challenging circumstances’.

NWAS also argued there were no inadequacies in the response to Saffie-Rose that contributed to her death and submitted her injuries were also unsurvivable.

Retired high court judge Sir John will rule on whether the deaths of Mr Atkinson and Saffie-Rose could have been prevented.

He will also issue his findings on the planning and preparation of each emergency service involved on the night for responding to terrorist and mass casualty events.

The inquiry heard that only three paramedics entered the City Room foyer – the scene of the explosion – and that crews from Greater Manchester Fire and Rescue Service took more than two hours to even attend the Arena. 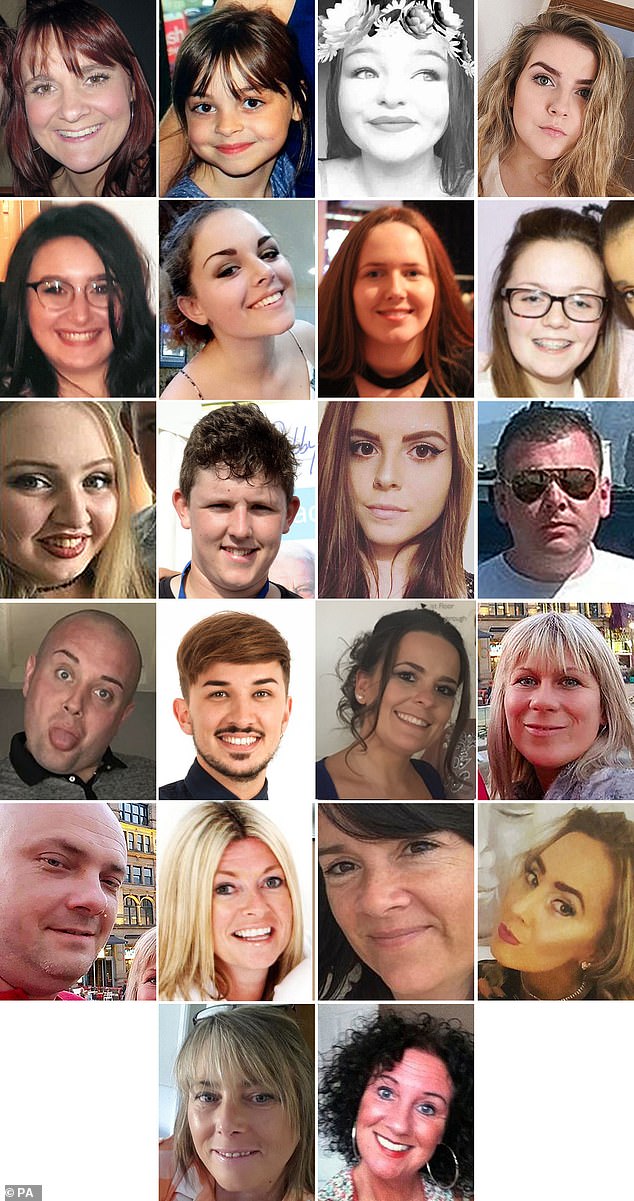 Greater Manchester Police will also fall under the spotlight as chief inspector Dale Sexton, who was in charge of its immediate response, failed to inform his counterparts in the ambulance and fire services he had declared Operation Plato, a pre-arranged plan for a suspected marauding armed terrorist.

The now retired Mr Sexton denied he was ‘overwhelmed’ by the sheer number of tasks he faced and said it was a deliberate decision which he believed would save lives as fire and ambulance crews would be held back in a Plato situation.

Sir John’s findings and recommendations will be published at 2.30pm on the inquiry website.

His first report on security issues at the Arena venue was issued last June and highlighted a string of ‘missed opportunities’ to identify Abedi as a threat before he walked across the City Room foyer and detonated his shrapnel-laden device.

The third and final report will focus on the radicalisation of Abedi and what the intelligence services and counter-terrorism police knew, and if they could have prevented the attack.  It will be published at a later date.

It comes as an ex-terror officer last night claimed that the Manchester Arena bombing was ‘preventable’ and there was a ‘perfect storm of failures’.

Andrea Bradbury, a retired counter terrorism police inspector who was herself injured in the 2017 attack, said emergency services were ‘unprepared and totally caught off guard’ by the bombing.

Ms Bradbury said: ‘People were left in the time of need. It was so wrong, especially when experienced officers who did go in were demanding assistance and firearms teams had secured the building.

‘It was horrific, but what has always frustrated and angered me is the fact that it was preventable in the first place — and after it did happen, people were so badly let down by the police and the emergency services.’

The public inquiry’s chairman has already stated that there were nine missed opportunities to stop the deadliest attack on British soil since 2005.

In June last year, Mr Saunders ruled that Abedi should have been identified as a threat to security on the night of the attack.

In a blistering summary, he criticised ‘serious shortcomings’ by stewards for Showsec, particularly after a worried parent drew their attention to the bomber lurking around suspiciously for nearly an hour but a poorly-trained security guard did not want to confront him for fear of being called racist.

He also slammed British Transport Police after officers drove five miles for a kebab over a two-hour lunch break, leaving no one on duty in the City Room Foyer, where Abedi blew himself up on May 22, 2017 during an Ariana Grande concert.

Sir John said he considered it was likely the bomber, 22, would still have detonated his device if confronted ‘but the loss of life and injury is highly likely to have been less’.

He is expected to publish a third report in the new year highlighting intelligence failings.

Ruth Murrell, who suffered injuries along with her daughter while her friend died in the attack, recalled ‘people dying in front of your eyes’ as scores of people tried to ring 999.

Figen Murray, whose son Martin was killed, is pushing for Martyn’s Law, which would make it a legal requirement for venues to improve security.