Britain’s anti-terror chief has been accused of a ‘woke stunt’ after he donned a special jacket that simulates menopausal hot flushes at Scotland Yard.

He said he found the vest with heated pads ‘at times uncomfortable’ and ‘at times distracting’.

He added that as the heat came to him in ‘waves’ while he attended the force’s Environment and Sustainability Board, he had a feeling of ‘Oh no, not now’ and ‘an anticipation before really losing my train of thought’.

Mr Jukes said wearing the jacket had given him ‘heightened awareness’ of the experiences of menopausal women and vowed to ‘redouble my focus to normalise our conversations about the menopause at work’.

It comes amid widespread criticism of police chiefs across the country for engaging in ‘woke’ gestures while many crimes go unsolved.

This week Home Secretary Suella Braverman and members of the public have voiced anger that police have failed to stop Just Stop Oil eco-activists from repeatedly bringing the busy M25 motorway to a standstill.

They pointed out that the Metropolitan Police is currently in ‘special measures’ because of its appalling performance and crime fighting record.

In June a scathing inspection revealed a catalogue of new failures by Britain’s biggest force, which failed to record tens of thousands of crimes, ignored almost all victims of anti-social behaviour, let down vulnerable victims and neglected a huge backlog of online child abuse referrals. 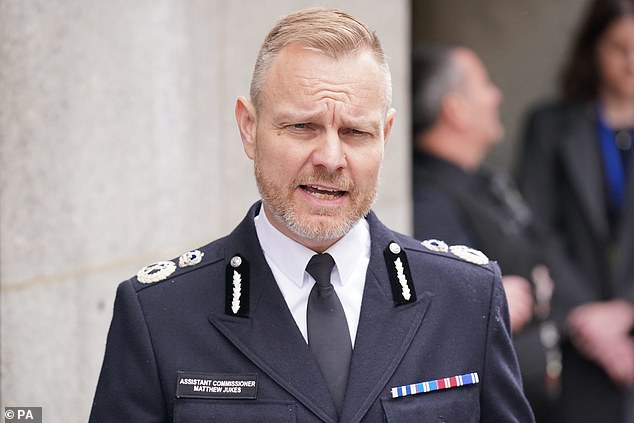 ‘Perhaps Matt Jukes could be encouraged to put on a blue uniform next time and walk on the streets at night to understand what it is like to be a real policeman.’

Another retired Yard chief superintendent, Dai Davies, said: ‘Mr Jukes should concentrate on arresting burglars and people who attack women to counter the appalling level of arrests and charges in the Met, let alone convictions.

‘He should leave women to be women, and encourage male and female officers to go out and do what they are paid to do: arrest criminals and protect the public.’

A serving senior officer at Scotland Yard, who saw the Menovest article on the force’s intranet, added: ‘At a time of crisis in the Met, this beggars belief. It’s politically correct nonsense.’

Mr Jukes’ Menovest experience was headline news on the Met’s intranet this week.

Under the headline ‘Trying on a Menovest for Menopause Awareness Month’, the article said: ‘AC Matt Jukes, the Met’s new HeForShe Gender Equality lead, Commander Nick John, and HeForShe Coordinator PS Terry Mole tried a Menovest at an event in partnership with charity Over the Bloody Moon.

‘The Menovest is like a jacket with heated pads that simulate an authentic menopause ‘hot flush’. It’s been designed to build empathy for menopause at work.

‘It replicates one of the many symptoms people face when experiencing the menopause and it’s designed to help raise awareness and to start important conversations.’ 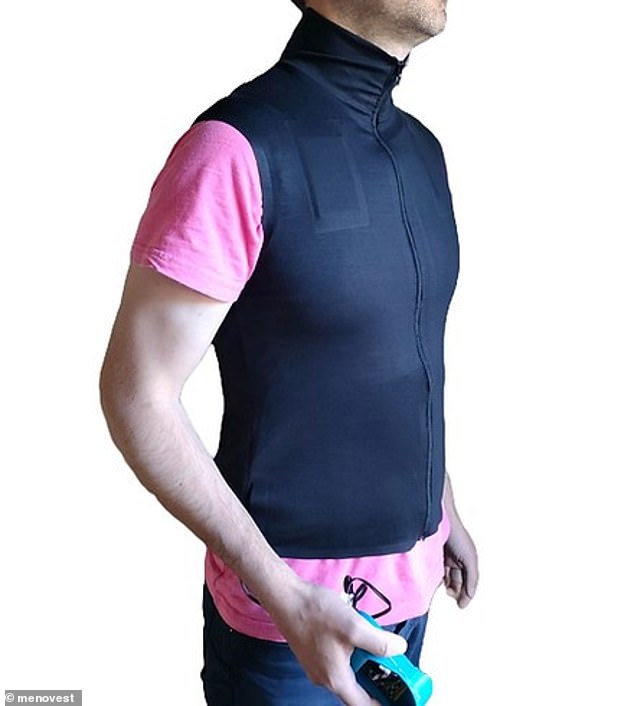 ‘The Menovest is like a jacket with heated pads that simulate an authentic menopause ‘hot flush’, Met Police website said

It quotes Mr Jukes as saying after trying the Menovest: ‘Like others who tried it, I don’t think wearing the Menovest qualifies me to ‘mansplain’ the menopause.

‘But I wore it during the Met’s Environment and Sustainability Board. How did that feel? Well at times uncomfortable, at times distracting.

‘As the heat came to a peak in waves, something I hadn’t expected was a feeling of ‘Oh no, not now’, an anticipation before really losing my train of thought.

‘Now I can explain that to colleagues at the end of the meeting, I can explain to them what I was wearing and why. But those conversations don’t take place for many women in the workplace.

‘So as well having this experience today, which has given me heightened awareness, I am really re-doubling my focus to normalise our conversations about the menopause at work.’ 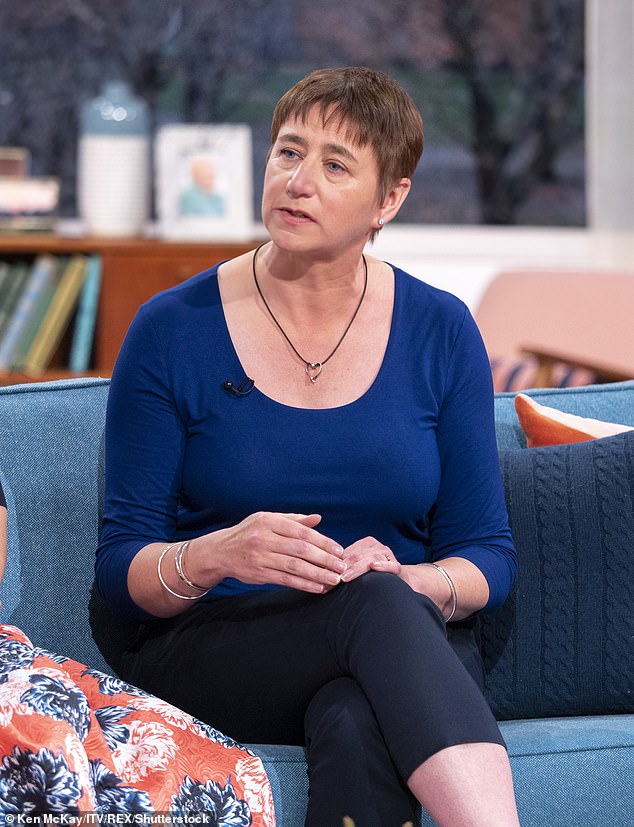 Diane Danzebrink, founder of Menopause Support, welcomed the exercise, saying: ‘It’s important for men to be educated about menopause’

The ‘woke mindset’ of top officers is hindering the fight against crime, a rank-and-file police chief has blasted.

Richard Cooke, Police Federation chairman at the country’s second biggest force, said too much time was being wasted instead debating issues such as ‘white privilege’.

His comments came after Home Secretary Suella Braverman called for a return to ‘common sense policing’ and told bosses she wants officers fighting crime, not ‘debating gender on Twitter’.

Sergeant Cooke, who represents around 7,500 West Midlands Police officers, said: ‘I agree with the Home Secretary; there is a “woke” mindset at the top that leads to much time wasted discussing… ‘critical race theory’ or ‘white privilege’ or whether there should be extra categories of hate crimes.

‘I say leave all that to the academics and politicians. Police officers should focus on stopping the crime and violence which disproportionately affects our young, diverse communities.’ He said the majority of officers signed up to ‘help others… and catch the bad guys’.

‘But that role has become something quite different in recent years with more and more of our time taken up with what I would describe as social work – eight out of ten calls for service are non-crime related,’ he said. ‘It begs the question if we don’t go, who will? There is a current crisis in our ambulance services – this has a massive knock-on to police work. We can’t just leave people who are in need to go fight crime…’

Chief Constable Olivia Pinkney, the UK lead for neighbourhood policing, said officers can spend half their shifts working on behalf of other services, leading to crime victims being ‘failed’ and the criminal justice system is now in ‘crisis’ she said.

Miss Pinkney, head of the Hampshire and Isle of Wight force, said officers across the country attend on average 54 mental health incidents every hour and spend three hours waiting with individuals before health professionals can take over.

She said she wanted them to be freed from attending incidents that ‘are not for the police service to lead upon’. Miss Pinkney said: ‘Come and sit in a police control room at half past three on a Friday afternoon, and the number of calls that come in and say “we haven’t been able to resolve this in health, in children’s social care, so we’d like the police to own this risk until Monday”.

‘It all lands on your desk because we’re here 24/7, we answer the phone.’ A source close to Mrs Braverman said ‘she has been crystal clear she wants to see a return to back to basics, common sense policing’.

Officers were then urged to watch a video of Mr Jukes talking about his experience trying the Menovest.

Diane Danzebrink, founder of Menopause Support, welcomed the exercise, saying: ‘It’s important for men to be educated about menopause because they will all know somebody who experiences it during their life-time.

‘It could be a partner, colleague, family member or friend. Young men may have mothers and grandmothers experiencing menopause.

‘One of the reasons that we have campaigned for menopause to be included in the school curriculum via our #MakeMenopauseMatter campaign is that if we all learn about it at an early age it gives us a greater understanding and hopefully greater compassion for those around us in all our relationships throughout our lives.’

As Assistant Commissioner for Specialist Operations at the Metropolitan Police, Mr Jukes, the former chief constable of South Wales Police, is in charge of the UK’s Counter Terrorism Policing, putting him at the forefront of the fight against jihadis and other murderous fanatics.

According to a recent profile, he has spent 26 years in law enforcement ‘with extensive operational and leadership experience in uniform and detective work including; territorial policing, corruption, homicide, kidnap, covert policing, protective security and counter-terrorism’.

In June, Her Majesty’s Inspectorate of Constabulary and Fire and Rescue Services (HMICFRS) announced that ‘systemic concerns’ about the Metropolitan Police’s performance raised by a new inspection had been so grave that the force needed to be put under special measures.

The unprecedented step means the force faces external monitoring and must come up with an improvement plan.

The damning assessment came after former commissioner Dame Cressida Dick was forced to quit in February following a torrid year of scandals which saw the murder of Sarah Everard by one of her officers, the force being branded ‘institutionally corrupt’ by an independent inquiry and two officers jailed for photographing bodies of murder victims.

The 57-year-old was chosen by the Home Secretary to steady the Metropolitan Police during the worst crisis in its history.

Sir Mark pitched a 100-day plan to start turning the country’s biggest force around, including boosting confidence in its ability to tackle violence against women and girls and driving down violence.

A Scotland Yard spokesman said: ‘A number of events were held for World Menopause Month and as part of this Assistant Commissioner Matt Jukes wore a vest recreating some of the effects of the menopause during a non-operational meeting.’

Assistant Commissioner Jukes said: ‘I make no apologies for spending a fraction of a long working week ensuring women who make a massive contribution to the Met whilst experiencing the menopause feel recognised and supported.’