Brides and grooms on their way to an exclusive wedding venue are being met by signs telling them they are not welcome by angry neighbours fed up of ‘noisy’ nuptials.

But locals say weddings at the idyllic venue cause a ruckus and ruin their sleep – claiming rowdy guests cause ‘excessive noise’ and even go to the toilet in their gardens.

Neighbours, including Roger and Susi Crane, have resorted to planting signs on the way into the venue’s car park telling couples they are ‘not welcome’ and that people have ‘had enough’.

The Cranes, owners of 500-acre Hill Farm whose fields surround Oxnead Hall, admit the signs are ‘harsh’ but say they and other residents have reached breaking point.

Signs which have been placed outside say: ‘brides and grooms are not welcome in Oxnead; no more weddings we’ve had enough; and exlusive?? More than 100 weddings this year.’ 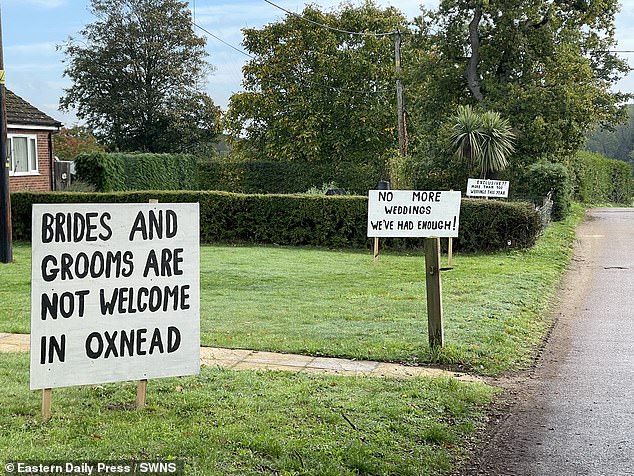 Neighbours who have ‘had enough’ of weddings at nearby Oxnead Hall near Aylsham, Norfolk, have lined the entrance to the car park with angry signs 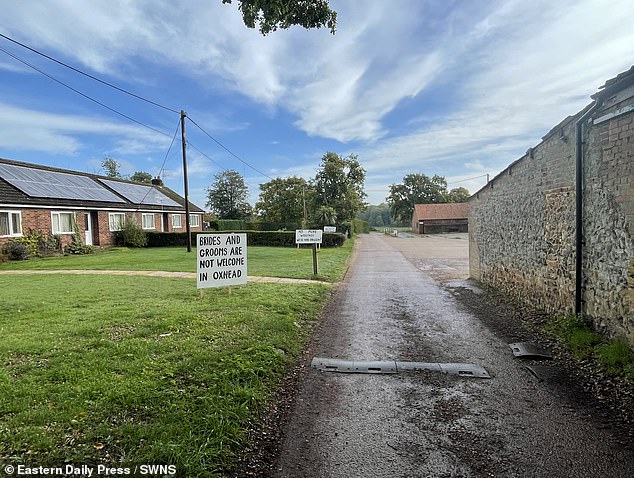 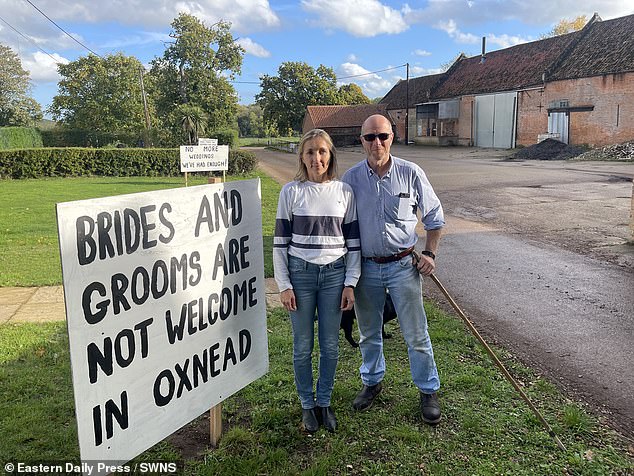 Susi and Roger Crane, who own the farm which surrounds Oxnead Hall, are among the neighbours objecting to the number and ‘intensity’ of weddings being held there 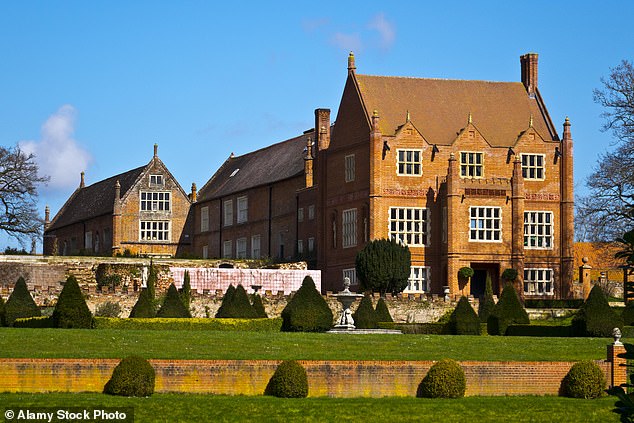 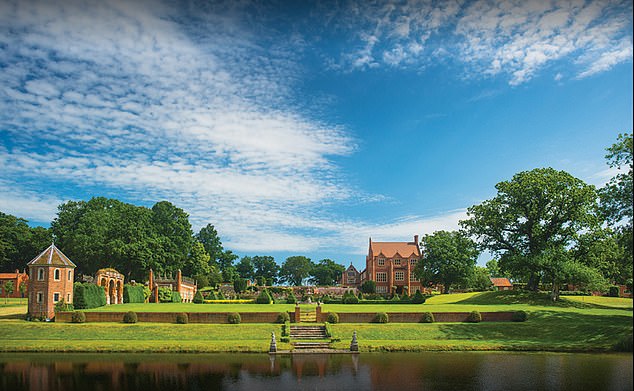 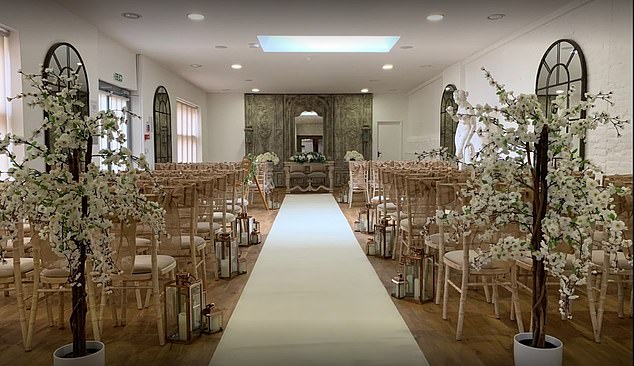 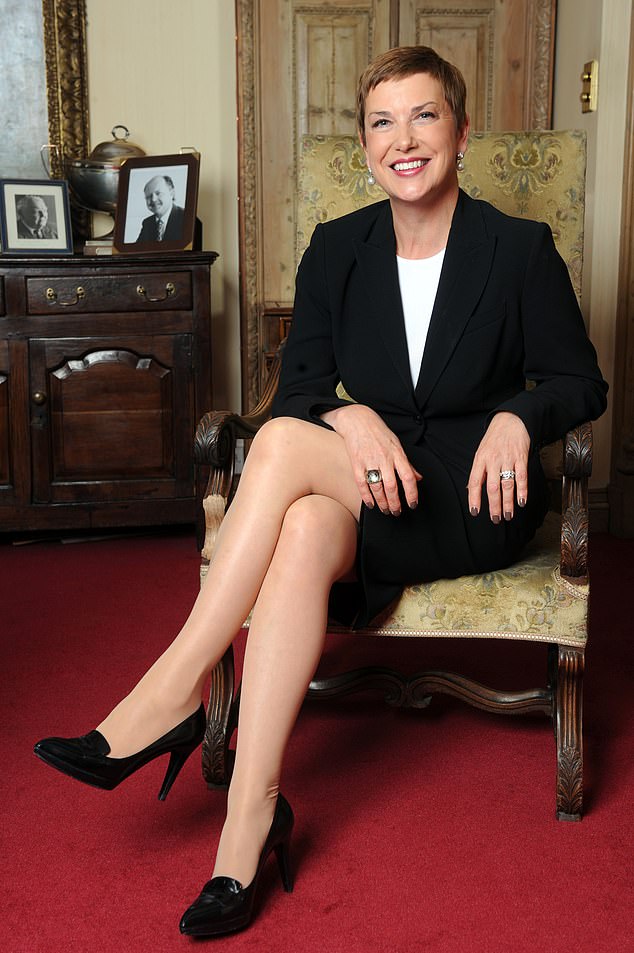 Beverley Aspinall, former managing director of Fortnum & Mason, said she ‘regretted’ the dispute had got so far and that the signs had been put up

The Cranes, who live in nearby Marsham, own three rented houses next to the hall.

They say convoys of vehicles stream past their houses, some shining headlights into homes when leaving late at night.

Mr Crane said wedding guests drive through their farmyard, where there are nervous horses, and past the cottages which they rent out.

‘The weddings are really having a big impact on our residents’ lives and that’s why we are up in arms about it.’

His wife said it had ‘sickened her to the core’ that the situation had been allowed to go on for so long and they have now lost patience.

‘Our residents are repeatedly disturbed by loud music way in to the night, even in their beds,’ she said.

‘One poor lady puts her children to bed to the sound of Michael Jackson.

‘They are unable to sit outside their homes in the summer and are often disturbed by shouting and laughing.

‘Guests have wandered through the yard and even relieved themselves in their gardens.

‘They have left glasses in gardens and wandered down to the livery which houses 26 horses.’ 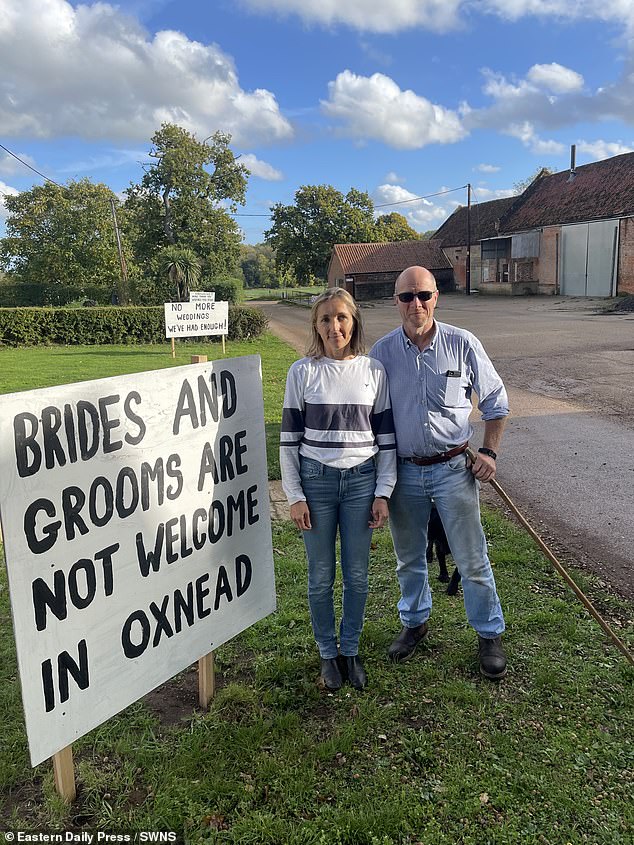 The Cranes, who live in nearby Marsham, own three rented houses next to the hall and are among the neighbours who have lost their patience 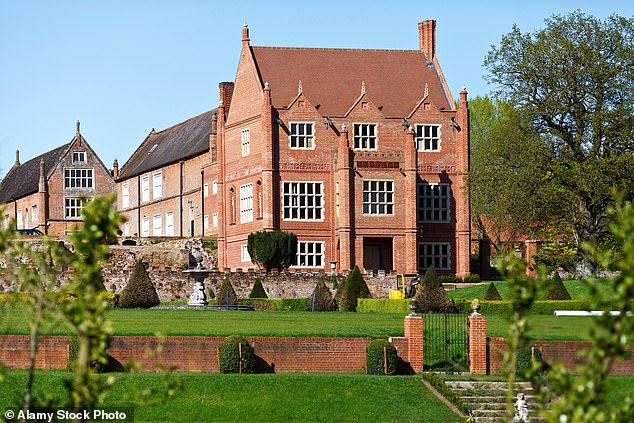 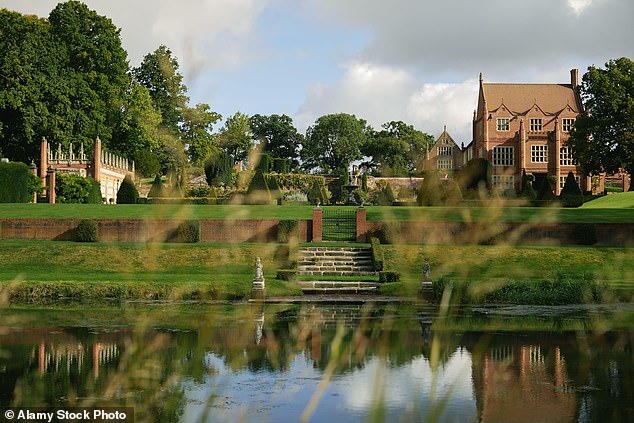 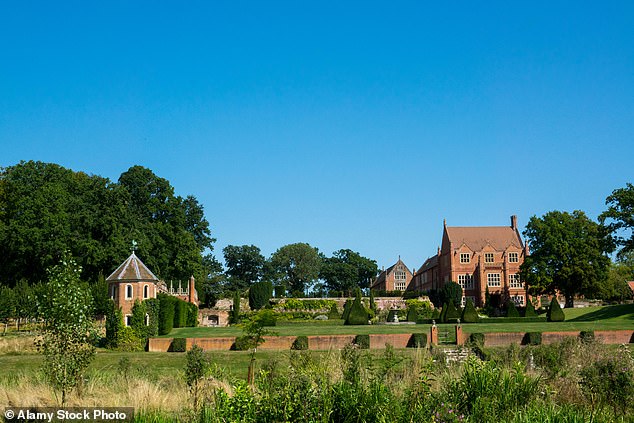 Wedding numbers at Oxnead were limited before the pandemic but when lockdown conditions were lifted to allow ceremonies to resume, the hall found itself with a long backlog of couples 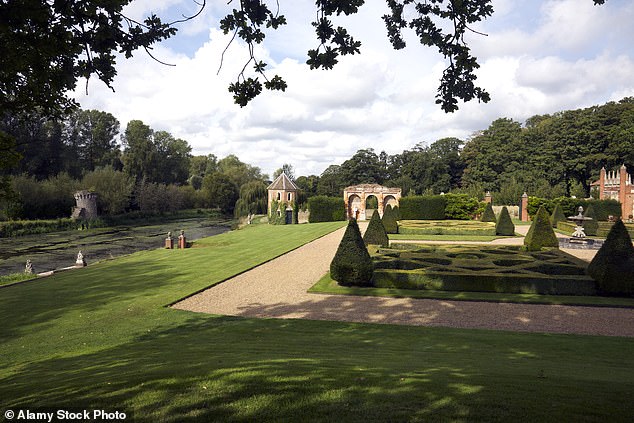 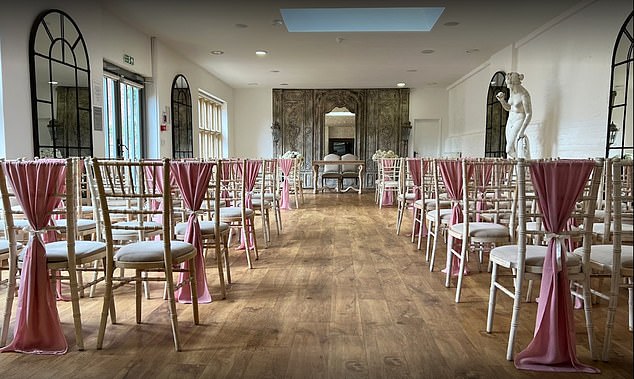 Resident Lorna Crook, who manages the livery stables, said she had moved her bedroom from the front to the back of her house because of the partying.

‘When it was once or twice a week you could deal with that, but it’s up to six a week. We all have to get up early and go to work.’

Relations have not always been so bad between the neighbours and owners of Oxnead Hall.

Mrs Crane said: ‘They initially came to us and said ‘this is our forever home, we want to have a few weddings to support the upkeep of the hall’ and we respected that.’

Wedding numbers at Oxnead were limited before the pandemic but when lockdown conditions were lifted to allow ceremonies to resume, the hall – along with venues across the country – found itself with a long backlog of couples.

Mrs Crane said: ‘They were granted permission to hold unlimited weddings and we don’t know how that came to be.

‘We have tried to challenge that with Broadland District Council but haven’t got very far.’

The neighbours claim the extra permission was granted without them being consulted.

Oxnead’s owners say they have done all they can to cut the noise.

Mrs Aspinall said they had invested thousands of pounds in soundproofing, employed security guards and put up a fence to keep wedding guests away from the neighbours’ homes.

There is also a state-of-the-art sound system which wedding bands have to plug into to limit their noise.

Mrs Aspinall said they ‘regretted’ the dispute had got so far and that the signs had been put up.

‘I feel sorry for those poor couples that have been through so much, that our neighbours have chosen this way of making their feelings known rather than coming to us and working collaboratively.’ 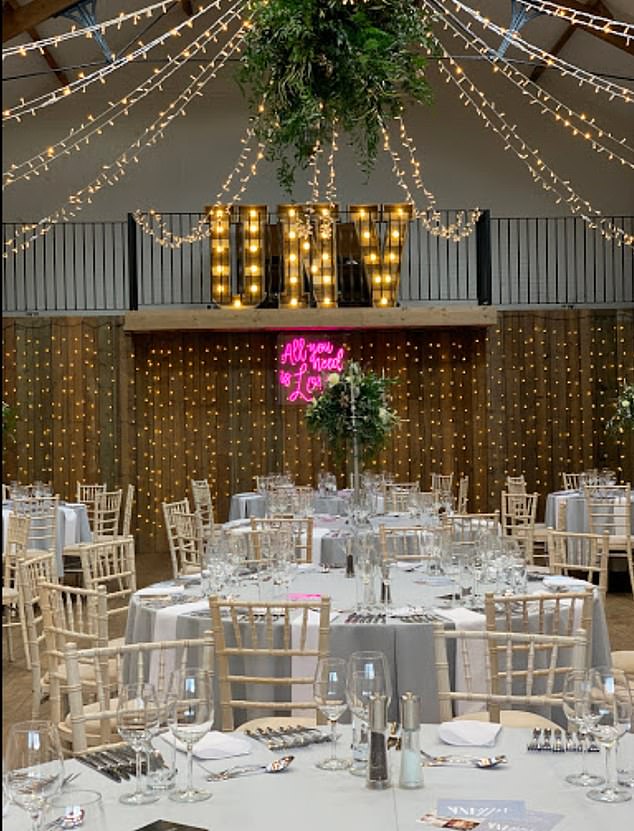 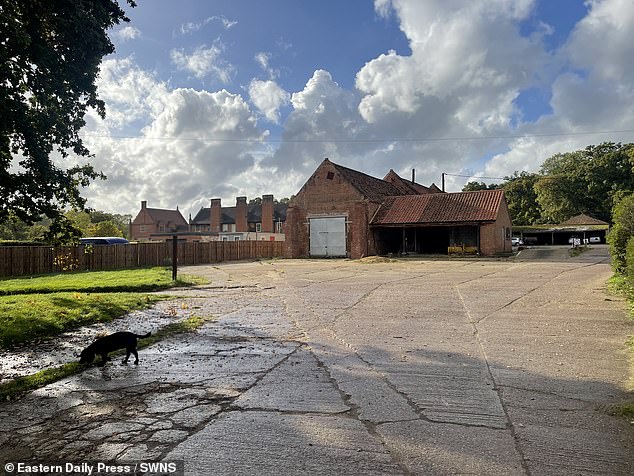 She said they felt they had done all they could to reduce noise and stop guests straying off the site and they’re hoping to find a way to stop vehicles having to drive past the homes and through the farmyard.

‘We are aware and we are doing everything we possibly can to minimise the issues,’ she said.

‘We’d be enormously grateful if anyone could help us find solutions.

‘We’ve asked for meetings and we’re trying to work collaboratively, but I have to say it has been very difficult and stressful for us – we’ve had staff resignations because of the way they’ve been treated.’

Broadland council said: ‘The development was considered to be acceptable when planning permission was granted, subject to conditions.

‘The council is currently investigating an enforcement complaint regarding the breach of the noise condition on the site.

‘This has not yet been concluded and the council will respond directly to the complainant once we have investigated this matter.’

Oxnead was the seat of the Pastons – one of England’s best-known medieval families – from 1420 and 1732.

According to the website bridebook.com, wedding packages there cost between £8,650 and £15,495, and the venue can accommodate up to 200 guests.