GPs are routinely flouting the rules in giving kids as young as 11 antidepressants, a Government-funded study claims.

The National Institute for Health and Care Excellence (NICE) says GPs can only prescribe the drugs to under-18s if they have first been assessed by a psychiatrist.

But a report by the NHS‘s research body, the National Institute for Health and Care Research (NIHR), found doctors ‘often’ dole out prescriptions before this.

Just one in four teenagers who were given antidepressants for the first time by their GP between 2006 to 2017 had seen a psychiatrist.

In total, the number of 12- to 17-year-olds prescribed the drugs in England more than doubled from 2005 to 2017. Children are getting them for anxiety, pain and bed-wetting, as well as depression.

It soared during the start of the Covid pandemic, peaking at an all-time high of 27,757 in March — two-thirds of which were girls.

NICE recommends the two-step approval process to ensure children are properly diagnosed before being given the drugs.

But GPs did not deny prescribing the medication without a psychiatrist’s blessing, adding children may have difficulty seeing ‘specialist services’. 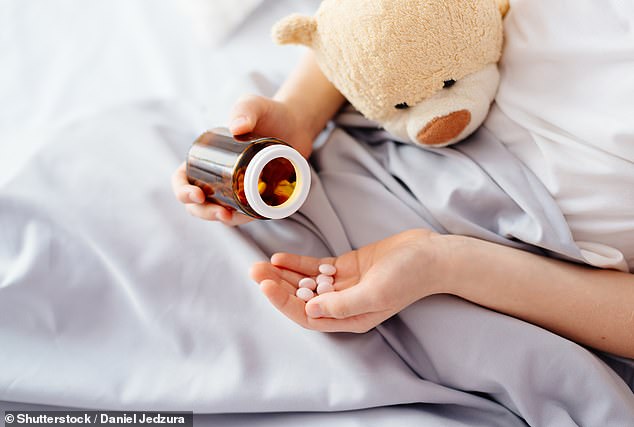 What are the NICE recommendations on prescribing antidepressants to children?

Writing in the report, the NIHR said: ‘No antidepressants are licensed in the UK for anxiety in children and teenagers under 18 years, except for obsessive compulsive disorder.

‘Yet both specialists [psychiatrists] and GPs prescribe them.

‘Thousands of children and teenagers in the UK are taking antidepressants for depression and anxiety.

‘The numbers continue to rise and many have not seen a specialist.’

The study found just over half of the prescriptions were for depression, while the next most common reason was anxiety (16 per cent).

Despite the drugs not being licensed for any condition other than OCD in under-18s, NICE recommends children can be offered them for depression — but only if is ‘moderate to severe’.

Children should be given fluoxetine, sold as Prozac, as this is the only drug that has clinical evidence showing its benefits outweigh the risks, NICE says.

The drug should start on a 10mg daily dose, although this can be increased to 20mg after a week if deemed necessary by doctors.

They should be taken off the drug if they have persistent side-effects, including nervousness, anxiety, rashes, joint pain, shortness of breath and seizures.

Children who take fluoxetine are at a slightly higher risk of becoming suicidal then those not on the drugs, although experts are not sure how much more likely it is.

GPs defended prescribing the drugs to children, although they said most medication is given in specialist mental health units.

Professor Martin Marshall, chair of the Royal College of GPs, said: ‘GPs are at the forefront of delivering care for younger patients suffering with mental health conditions and it’s something we and our teams take extremely seriously.

‘In the vast majority of cases antidepressant medication for children will be initiated in specialist care, not in general practice.

‘But GPs are highly trained prescribers and there may be instances where a GP believes it is appropriate and in the best interests of a young patient to prescribe them medication for a mental health condition — particularly if they are having difficulties accessing specialist services.’

He added: ‘In many cases medication will be an appropriate and effective intervention for children and young people with mental health conditions.

‘However, it remains vital that all treatment options, especially talking therapies, are explored and that access to alternative therapies, which can be of benefit to young people with mental health conditions but can be patchily available across the country, is improved.

‘It is also vital that when GPs refer patients to specialist services, these referrals are taken seriously and not rejected without good reason.’

[ad_1] Kanye West is being sued by a record company over adding Life Of The Party, his collab with Andre 3000,…

[ad_1] Kris Jenner shared a throwback video of one of her favorite Halloween costumes on Friday. The 66-year-old reality star was…

[ad_1] Back in July, she gave birth to her first child, a beautiful baby girl named Mila. And on Thursday night,…