First Lady Jill Biden paid tribute to Beau Biden and Corey Phelan, the late minor league Phillies pitcher, during a Stand Up To Cancer tribute during Game Four of the World Series Wednesday night in Philadelphia.

The hardcore Phillies fan made her presence known at the game during a brief moment of quiet throughout Citizens Bank Park, as audience members held up tribute cards.

Beau Biden died of brain cancer in 2015, while Phelan passed away just weeks ago after a battle with a rare and aggressive cancer called T-cell Acute Lymphoblastic Leukemia. The 20-year-old Phelan played for the minor league team that fed into the Phillies.

One photograph captured Biden appearing to wipe away a tear after the solemn moment.

She was sporting a World Series jacket with ‘BIDEN’ written on the back, a souvenir from Philly’s last run at the championship, she said.

The first lady did a three city tour of Pennsylvania Wednesday, while her husband President Joe Biden warned of ‘dark forces that thirst for power,’ as he begged Americans to vote for Democrats in the midterms, over hundreds of Republican election deniers, with less than a week to go until the midterms.

‘And as my husband said, we are fighting for the soul of America,’ Dr. Biden told a crowd at a campaign stop in Allentown, Pennsylvania – stumping for Rep. Susan Wild at Muhlenberg College.

‘I was watching his speech on the TV,’ Dr. Biden said. ‘If you have time tonight, I know you’ll be watching the Phillies game. Between commercials, watch Joe’s speech.’ 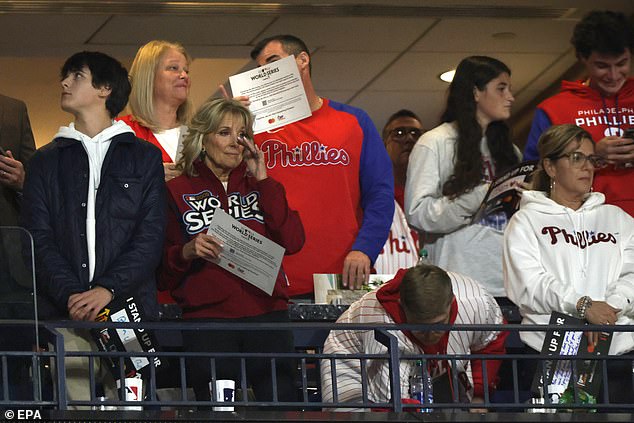 First Lady Jill Biden appears to be wiping away a tear after attendees at Game Four of the World Series stood up in a memorial tribute for Stand Up to Cancer Wednesday night in Philadelphia, a solemn moment during an otherwise raucous affair 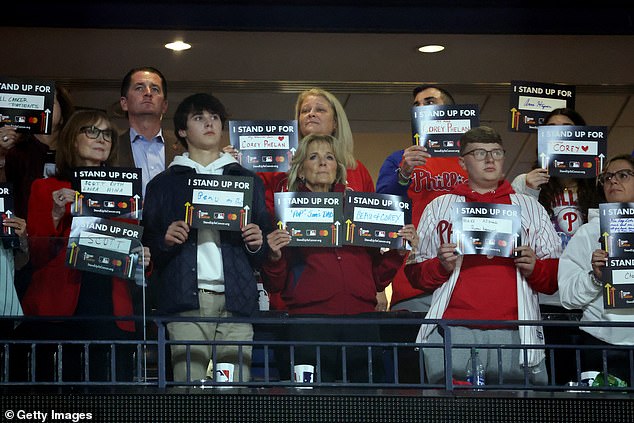 First Lady Jill Biden paid tribute to Beau Biden and Corey Phelan, the late minor league Phillies pitcher, during a Stand Up To Cancer tribute during Game Four of the World Series Wednesday night in Philadelphia 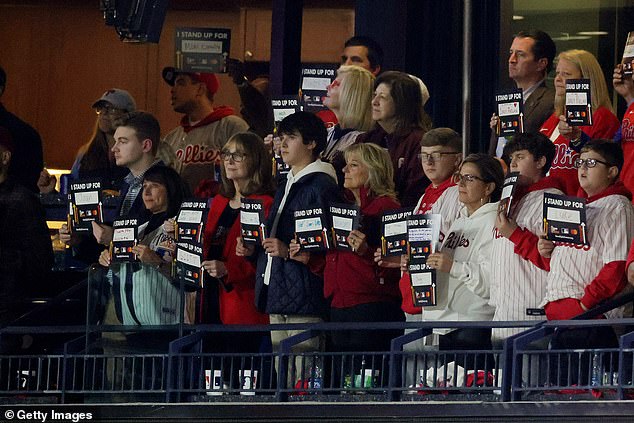 The first lady was flanked by grandson (to her left) Hunter Biden, the son of the late Beau Biden and cancer survivor Luke Theodosiades (to her right) at Citizens Bank Park for Game Four of the World Series 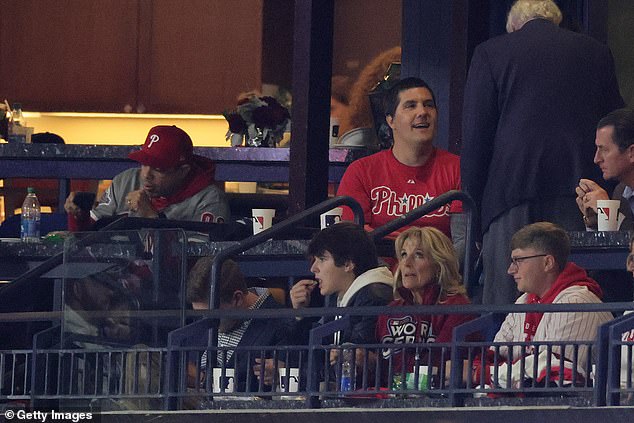 First Lady Jill Biden sits in a box at Citizens Bank Park in Philadelphia for ame Four of the World Series Wednesday. She’s wearing a World Series jacket with ‘BIDEN’ written on the back 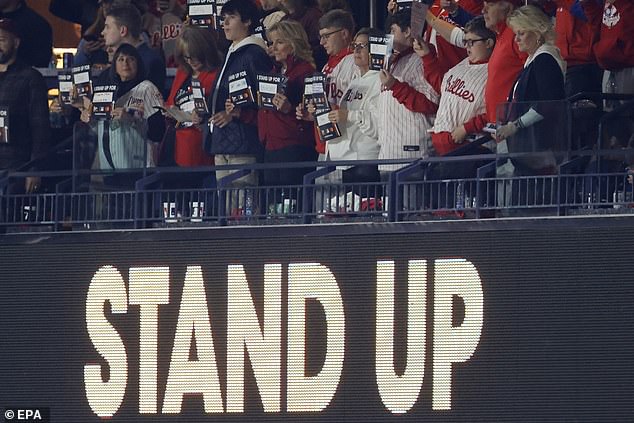 Dr. Jill Biden flashed onscreen during the Stand Up To Cancer tribute during Game Four of the World Series Wednesday night

The first lady got to the stadium when the score was 0-0, but then the Houston Astros scored five runs during the 5th inning, leaving her beloved Phillies trailing behind. Biden departed the game during the 9th inning, with the final score being 5-0 Astros.

At the Muhlenberg College appearance, Dr. Biden kicked off her speech by acknowledging the game.

She said the Philly fandom was ‘proud.

And some might say obnoxious – but they’re just jealous,’ she said.

Even at her first stop of the day in Pittsburgh, the home of the Pirates, she gushed about the Philles.

‘It’s wonderful to be here, actually, in my home state. I grew up in Pennsylvania. Even though it’s Pirates country,’ she said at a Democratic National Committee fundraiser at the home of Cindy and David Shapira, the former head of the Giant Eagle grocery store chain.

‘We are all Pennsylvanians at heart, right?’ she said, garnering applause.

‘Yes we can clap to that,’ she said, as the 30 or so audience members clapped more vigorously.

The first lady then headed to a get out the vote event for the American Federation of Teachers on Pittsburgh’s South Side – stumping for two Democratic House candidates, Chris Deluzio and Summer Lee.

‘Like a lot of educators to stay organized, I use to-do lists,’ Biden said. ‘So this election is going to be won or lost by where voting falls on your to-do list.’

‘This year races up and down the ballot are going to be so close. And the only way we’re going to win is by showing up,’ she continued.

‘So put voting at the top of your to-do list,’ the first lady added. ‘We all have that teacher voice. That makes people stop what they’re doing and pay attention. Well now is the time to use it.’

Dr. Biden was introduced by president of the American Federation of Teachers Randi Weingarten who called her a ‘sea change’ from the last first lady, for ‘decency, competence, for science, for inclusion, for our kids.’ 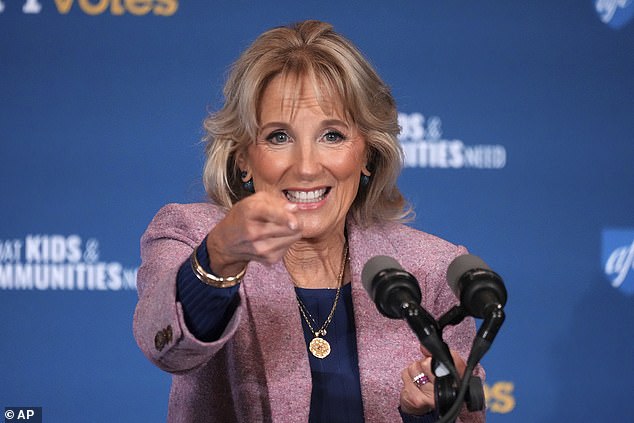 First Lady Jill Biden spoke at the American Federation of Teachers’ headquarters on the South Side of Pittsburgh Wednesday as she did a three-city tour of the Keystone State, stumping for Democratic candidates and watching the Phillies in the World Series 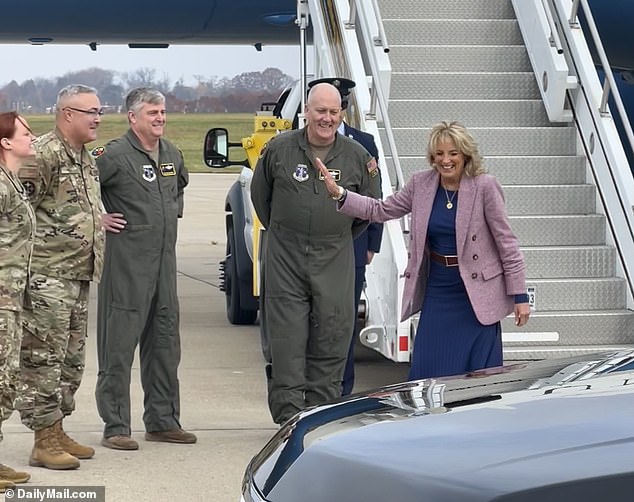 Wild’s race for Pennsylvania’s 7th Congressional District is a true nail-biter.  She’s fending off a bid from Republican Lisa Scheller.

Wild beat Scheller by around 14,000 votes when the two women ran against each other for the seat in 2020.

Now with new distict lines drawn after the 2020 census, the district is more favorable to Scheller, as the red Carbon county was added in.

FiveThirtyEight is calling the race a ‘dead heat,’ with Scheller given a slightly better chance of winning. A scorecard by Fox New Channel says the race leans Republican.

Dean, on the other hand, has a ‘very likely’ chance of retaking her seat, FiveThirtyEight predicts.

She’s being challenged by Republican Christian Nascimento, who ‘accepted with reservation‘ the results of the 2020 election. 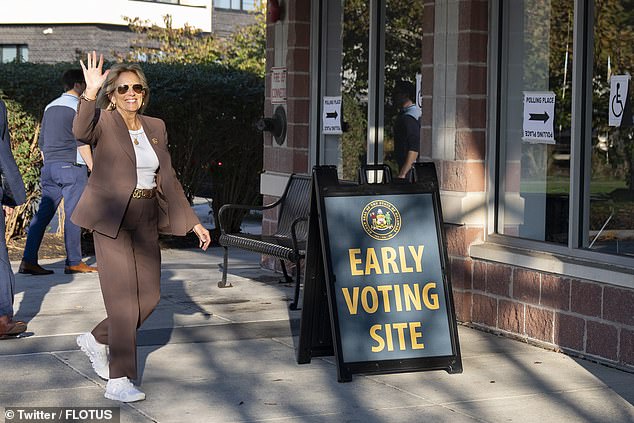 First Lady Jill Biden walks into an early voting site Tuesday in Wilmington, Delaware to cast her ballot in the 2022 midterm elections. Dr. Biden will travel to both sides of Pennsylvania on Wednesday, boosting endangered Democrats and then attending a Phillies World Series game 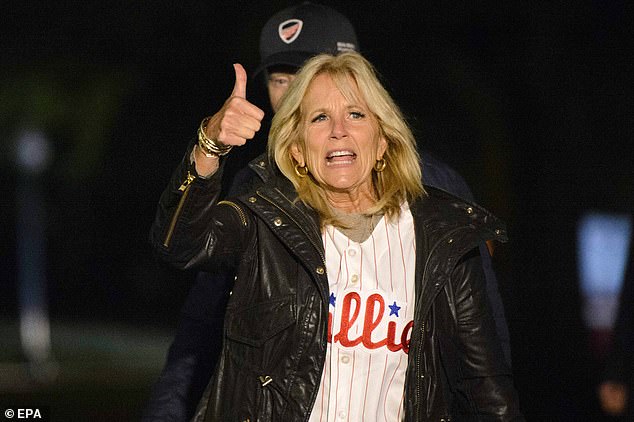 First Lady Jill Biden grew up in suburban Philadelphia and has been a Philadelphia Phillies fan since girlhood. She’ll attend Game Four of the World Series Wednesday night as part of the Biden administration’s ‘Cancer Moonshot’ initiative

Biden’s final stop will be to Game Four of the World Series that pits the Philadelphia Phillies against the Houston Astros.

Philadelphia is 2-1 in the series, after dominating at home in Game Three, 7 to nothing.

The White House announced Monday that the first lady would make the trip as part of the administration’s ‘Cancer Moonshot’ initiative.

The trip was delayed one day, as Game Three, originally scheduled for Monday night, took place Tuesday due to rain.

It’s a tradition to dedicate a portion of Game Four to those affected by cancer, as part of the MLB’s partnership with Stand Up To Cancer.

The president and first lady haven’t been shy about showing off their Philly fandom during the baseball post-season.

Dr. Biden was born in New Jersey, but grew up in Willow Grove, Pennsylvania, a town just north of Philadelphia.

The president was born in Scranton, Pennsylvania, but grew up in Wilmington, Delaware, with his closest major league sports teams located in Philadelphia.

The first lady returned to the White House wearing a Phillies jersey on October 23, the night the team beat the San Diego Padres to win the National League title. 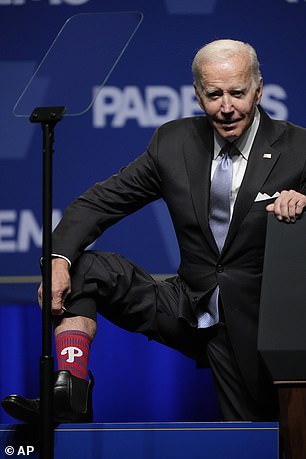 That win put them in the World Series against Houston.

At a recent fundraiser Dr. Biden spoke about how growing up her family spent more time talking about the Philadelphia Phillies than politics.

The president showed his Philly love on Friday by lifting up his leg at a fundraiser for Democrats John Fetterman and Josh Shapiro and showing the Philadelphia crowd he was wearing Phillies socks.

He then pulled up his pantleg to show off his red socks with the trademark cursive ‘P.’

‘We got a good year going – the Phillies and the Eagles,’ he continued. ‘Look, folks, I better get this on the way because the Phillies are playing tonight. And I love you all, but I’d like to see the game too,’ the president added.

Earlier this month, the first lady also attended a Philadelphia Eagles game, which was also part of her cancer advocacy.

That appearance created headlines when a video went around the internet that appeared to show the crowd vigorously booing the first lady.

That video was later found to have been manipulated.

Philadelphia sports fans have a reputation for being hostile, thanks to a 1968 incident in which Eagles fans were so angry at the team’s poor season they booed Santa Claus.