Pupils can be taught online one day a week to help schools manage heating bills, a council has suggested.

Schools in a Welsh local authority have been given the go-ahead to keep pupils at home on Fridays to cut costs.

It would mean thousands of children facing a return to Covid-style remote learning, despite evidence that it harms educational outcomes.

Studies conducted since the pandemic have found disadvantaged pupils, who have less access to technology and family support, suffered the worst learning loss in lockdown. 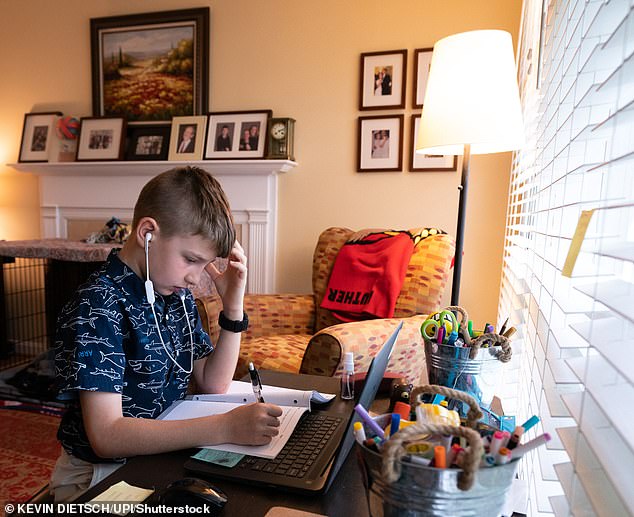 Thousands of children face a return to Covid-style remote learning, despite evidence that it harms educational outcomes

But councillors in the Liberal Democrat-controlled area of Powys believe closing schools for one day a week could be an answer to rising fuel costs.

Councillor Pete Roberts, the Powys cabinet member for education, told a meeting of the council that school budgets were being looked at ‘in detail’ for ‘potential solutions’.

He said: ‘We did suggest the possibility of a four-day week, with a fifth day being taught virtually as well as blended weeks of learning as extreme cases for consideration.’

He added that online learning could ‘reduce the utilities cost for the schools and lead to a considerable saving.’ 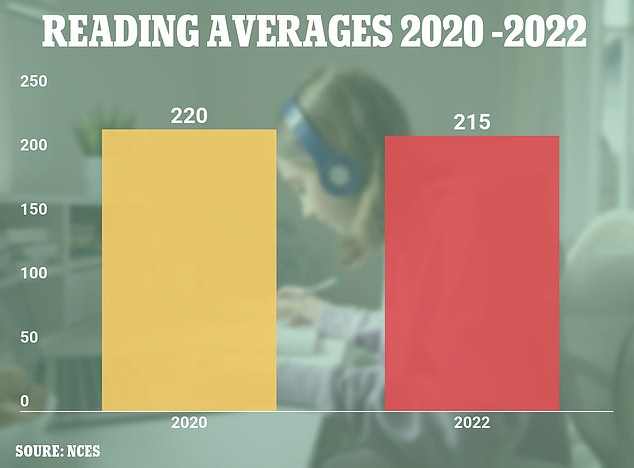 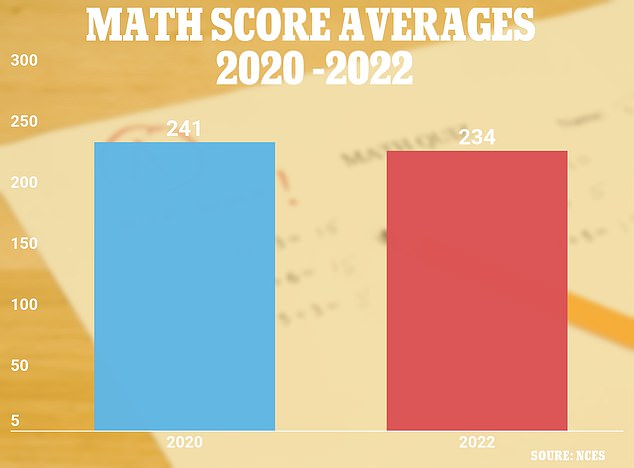 Testing scores in math for 9-year-old students in 2022 dropped from 241 (on a scale of 500) to 234 during lockdown. It’s the first major decrease in math scores in the 50 years they’ve been recorded

But he stressed schools have been given no ‘clear directive’ to do this, according to the Local Democracy Reporting Service.

He said each school will be left to decide for itself how to make the savings.

And he added: ‘Ultimately it is the decision and responsibility of the headteacher and their chair of governors regarding the school budget, and one size does not fit all.’

It is understood the idea was put forward by officers at a briefing for headteachers and chairs of governors recently.

Their other suggestions to save money included children wearing coats to reduce the need for heating, not filling vacant positions, and finding volunteers to work in schools.

Eithne Hughes, director of the Association of School and College Leaders Cymru, said the suggestion ‘underlines the very seriousness of the situation that we have here in Wales’.

She told the BBC: ‘Obviously, if we’ve got children at home for one day a week or half a day a week, we’re going to compound the problems of the children who are in the greatest need.

‘So it has to be an absolute last solution.

‘But the fact that it has been considered, I think really is a sign of how difficult the whole situation is.

‘Schools at the moment are trying to juggle and make books balance, when actually they just don’t balance. It’s going to lead to redundancies.’

However, Tory Powys councillor Iain McIntosh said on Twitter: ‘Turning the heating off in schools and forcing children to be taught from home wasn’t on the Welsh Lib Dems’ list of election pledges in May.

‘This goes to show they don’t have a clue about running education in Powys!’

It comes after headteachers’ union ASCL surveyed 630 school leaders about funding cuts and found 17 – 2.7 per cent – are ‘considering’ a four-day week.

In September, South Essex College became the first to introduce a four-day week because of rising energy costs.

[ad_1] By Christina Gentile, PsyD, as told to Barbara Brody First things first: Stress does not cause Crohn’s disease. But physical ailments…

[ad_1] Do you have recurring nightmares, such as being chased by wolves, drowning or being attacked? If so, you may be…