Leigh White, pictured arriving at London’s High Court, claims she was promised the sprawling estate as part of Mr Gladstone’s will

A multimillionaire retired ambassador is at war in court with his ‘surrogate daughter’ who claims she is the rightful heiress to his historic mansion and £20million estate.

David Gladstone – former High Commissioner to Sri Lanka and the man who opened the first British embassy in Ukraine – claims lawyer Leigh White is squatting in his £15million Grade-I listed family mansion in Buckinghamshire and refusing to leave.

The formerly close family friend, who moved in in 2017 after Mr Gladstone was ‘knocked sideways’ by the death of his son, insists she has a right to stay at Wotton House, near Aylesbury, because she was promised it would be hers on his death as ‘successor and heiress’ to his £20million estate.

But the 87-year-old – who is still in Cumbria after moving north to shield from Covid-19 – is now suing to force her out of the stately home, saying he is ‘desperate’ to spend his final years in the family pile, which dates from 1714 and boasts famous neighbours in Tony and Cherie Blair.

However, Ms White, 55, is herself countersuing at the High Court, is refusing to shift and claiming frail pensioner Mr Gladstone must have forgotten earlier promises that she would inherit the sprawling property when he dies.

The court heard that Wotton House was originally bought by Mr Gladstone’s first wife April’s family in the 1950s, but that he inherited it following her death in 2014.

Dating from the 18th century, it boasts extensive grounds which were modelled by the celebrated landscape architect, Capability Brown, who laid down pleasure gardens and two lakes.

The huge stately home was heavily rebuilt by leading architect Sir John Soane in the early 19th century following a major fire, and several temples and pavilions were also created in the gardens. 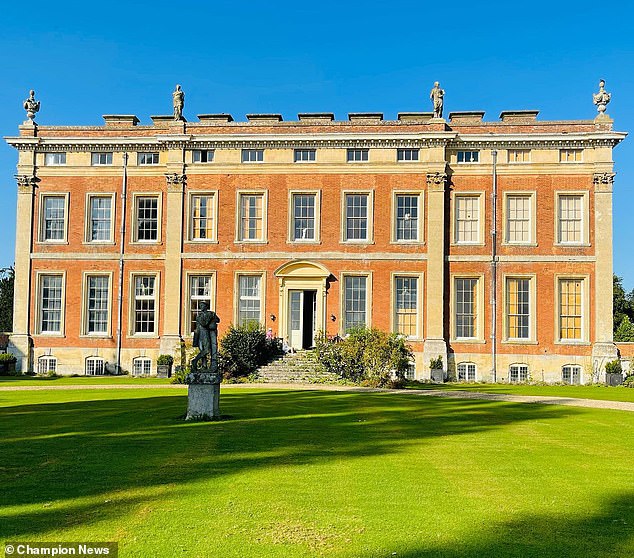 The £15million sprawling estate of Wooton House belongs to David Gladstone, the former High Commissioner to Sri Lanka and dates back to 1714. It is now at the centre of a furious legal battle between Mr Gladstone and his ‘surrogate daughter’, lawyer Leigh White, 55

The former coach house on the estate was purchased in 2008 by Tony and Cherie Blair and another building was also sold to the couple in 2013.

During a two-week trial, Mr Justice Trower heard that David and April Gladstone had devoted much of their time to Wotton, restoring historic features and much of the original landscaping of the grounds.

They met Ms White 30 years ago and their friendship bloomed due to a shared passion for Sri Lanka, classical music and theatre, and she became part of their inner circle, managing Wotton as Mr Gladstone got older.

But Ms White claims that from 2007 onwards, Mr Gladstone – who she says treated her as a ‘surrogate daughter’ – repeatedly assured her that Wotton House and two other properties making up his £20million estate would go to her when he died. 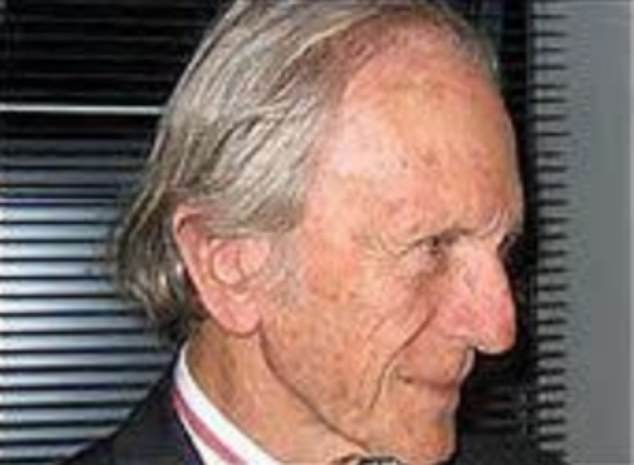 But frail 87-year-old Mr Gladstone, pictured, says he wants the vast 18th century property to go into a trust ‘for many generations’

Her barrister, Penelope Reed KC, highlighted a lunch at the National Liberal Club that year ‘when David asked her if she would take on Wotton when he and April died, which she reasonably understood as meaning she would inherit it’.

And she claims that ‘promise’ was later confirmed over dinner at a Thai restaurant in Upper Street, Islington, north London, in October 2011 which Mr Gladstone even logged in his own diary, noting: ‘There is now no going back, Wotton is promised to Leigh.’

She had enjoyed a ‘close personal bond of love and affection’ with the Gladstones and Mr Gladstone himself had referred to them as being ‘mum and dad’ in an email to Mrs White, she said.

It was only after he moved north to Cumbria to shield with his new wife, Mary, during the first lockdown that the relationship and Mr Gladstone’s inheritance plans changed unexpectedly, she claimed.

He demanded she move out so he could move in with Mary and announced he had written a new will, placing his estate into a discretionary trust for the benefit of his family – and leaving nothing and no role for Mrs White.

The move resulted in Mr Gladstone suing Mrs White for possession of the house, with her countersuing, claiming she has a right to it because of his earlier inheritance promises.

Her barrister, Ms Reed, said it would be ‘unconscionable’ for Mr Gladstone to go back on the assurances he made to her over the years that she would be his main heiress and get his estate when he dies.

The promises came in the context of an extremely close loving relationship and she had positioned her whole life since 2007 relying on those promises, harming her career as a lawyer on the basis that she was to inherit a £20million estate.

‘David promised Leigh Wotton,’ said the barrister. ‘She then spent her time assisting him with the running of Wotton, including moving into the property and caring for and supporting him and his family.

‘It is submitted that having made those promises to Leigh over a long period of time and she having arranged her life on the basis of them, it is very clearly unconscionable for David to resile from them.’

But for Mr Gladstone, Tracey Angus KC denied there had ever been a promise that Ms White would inherit Wotton herself and, as a lawyer, she must have understood that he intended for it to go into trust ‘for many generations’.

‘There are other factors, apart from what was said to her by David, which make it unreasonable for Ms White to have relied upon these conversations in the way she claims to have done,’ she continued.

‘In 2007 and 2011, it was April, not David, who owned Wotton. Ms White does not allege that April gave her any form of assurance concerning Wotton.’

She added: ‘There is no evidence that Ms White changed her behaviour in any way following the alleged National Liberal Club assurance in 2007, let alone the course of her entire life.’

Although Ms White claims to have been asked to move in in 2017 so she could more closely manage the house, Mr Gladstone denies that, pointing out that he had managed it for many years while living part-time in London.

And having moved in, Ms White had gradually assumed a tighter hold over Mr Gladstone’s property and financial affairs, said the KC, adding that this pattern increased after he went to shield from Covid in March 2020.

‘After David moved to Cumbria to shield, he felt Ms White was not consulting him sufficiently about decisions concerning property and affairs, and that she was taking some steps of which he did not approve – including sacking his long-standing accountant and appointing (her husband) in his place,’ she said.

Ms White had never been the main beneficiary in any of Mr Gladstone’s wills, merely a trustee and one of several potential beneficiaries of a discretionary trust into which Wotton would go to safeguard its future, the court was told.

But faced with an increasing deadlock after his move to Cumbria, he had decided to cut her out altogether, removing her as trustee or beneficiary of the estate trust and asking her to get out. 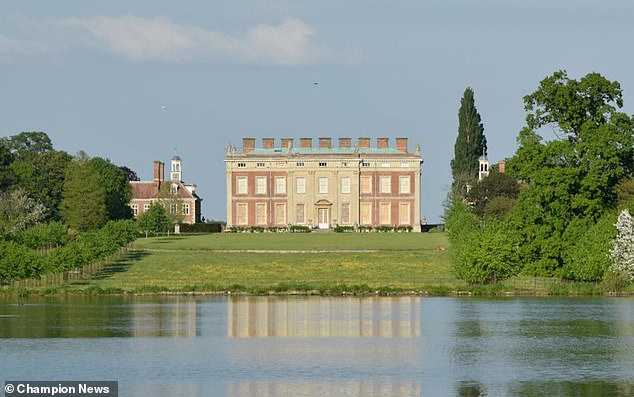 The huge stately home was heavily rebuilt by leading architect Sir John Soane in the early 19th century following a major fire, and several temples and pavilions were also created in the gardens. It also boasts having two lakes in its grounds

‘Ms White refused to move out and instead appears to have decided the house was her and her son’s primary residence,’ claimed the KC, who added that she was then joined at Wotton by her husband ‘at some point during 2022’.

‘He desperately wants to spend what remains of his life at Wotton. However, following the events described below, Ms White is living in the house with her family and has refused to move out. David’s relationship with Ms White has broken down irretrievably.

‘At present David is living in a house owned by his wife, Mary, 84, in Cumbria, having moved there from Wotton in March 2020, temporarily, to shield from the Covid-19 pandemic.’

She added: ‘The relationship between David and Ms White has broken down. Regardless of who is at fault for this, David cannot return to Wotton whilst Ms White is there and it is unfair to exclude him from his home.’

But Ms Reed, for Ms White, said her client had spent ‘time and energy’ on the Gladstones, to the detriment of her own family and career, in the expectation that she was going to inherit Wotton House.

No one could possibly know where she would be in life if she had been free to devote her time to her career, rather than caring for the Gladstones and managing their house, it was claimed in court.

She could only think that, in his old age, Mr Gladstone had forgotten how close she had been, the help she had given him and the things he had promised to her years ago.

‘David was steadfast and clear over a period of many years that Leigh was to have Wotton after he and April died,’ Ms Reed told the judge.

‘That changed when he went to Cumbria to spend Lockdown with Mary – and Leigh has never understood why that change occurred.

‘It seems clear that David can no longer recall the gravamen of the promises he made, or the important part Leigh played in his life.

‘However, his actions have changed the course of Leigh’s life and David should not be allowed to resile from the promises he made.’

As well as the fight over the future of the house, Mr Gladstone is also suing for the return of about £800,000 in bonds which he transferred to Ms White.

He says the transfers were made at a time when she was in the ‘ascendancy over him’ due to his old age and mental and physical frailty.

But Mrs White says the transfers were part of inheritance tax planning and that the funds were ultimately earmarked for running the house after his death.

Mr Gladstone also wants Ms White removed from her position as trustee of a ‘heritage property maintenance fund’ established for the purpose of maintaining Wotton.

The judge is expected to deliver a ruling on the case at a later date.

[ad_1] When you have multiple sclerosis (MS), your immune system works against you. Left unchecked, immune cells attack the protective layer…

[ad_1] As you go through prostate cancer treatment, there are foods you can eat — and others to avoid — that…

[ad_1] HBO debuted the Season 2 premiere of The White Lotus on Sunday evening, where fans got a full frontal NUDE…

[ad_1] They recently announced their engagement and confirmed that they are planning to tie the knot in June next year. And…