Two people are believed to have died in a tragic mid-air collision between two light aircraft in south-east Queensland that created a loud bang heard by farm workers.

Ambulance, police and fire and rescue crews rushed to the scene of the incident at Kybong, just south of Gympie on Wednesday afternoon.

But despite their efforts, it is understood one person from each aircraft died in the paddock the planes crashed in.

An unnamed emergency services worker told Daily Mail Australia the accident scene in the paddock was ‘traumatic’ for all attending emergency crews. 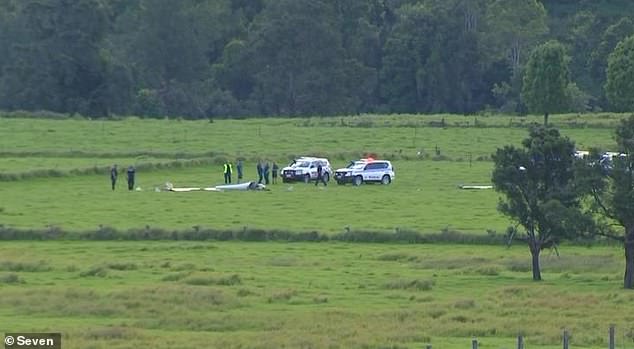 Emergency crews rushed to the scene of an air crash involving two light planes at Kybong, just south of Gympie on Wednesday afternoon. Tragically two people are believed to have died 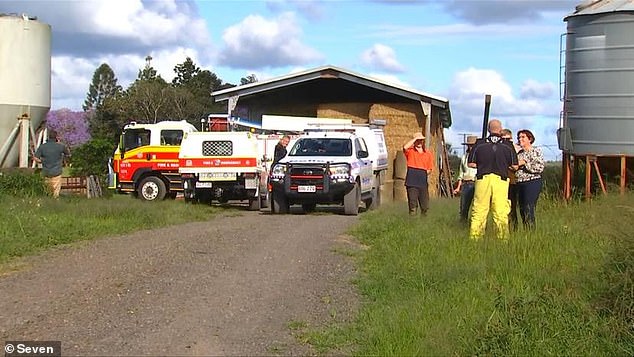 Reports say a plane collided with a glider that it was towing, before both crashed into a paddock south of Gympie, Queensland

A witness who lives on a neighbouring property said he was sitting on his veranda when a loud bang rang out.

‘We thought that didn’t sound like a gunshot and we looked up and saw white bits of plane falling out of the sky,’ he told 7News.

Reports say a plane collided with a glider that it was towing, before both crashed into a paddock, the Courier Mail reported.

Nearby farm workers also reported hearing a loud explosion at the accident.

Lindsay Mitchell from Gliding Australia said one of the men who died was an experienced glider pilot.

The incident was reported to emergency services around 2.50pm.

Queensland Fire and Emergency Services sent three crews to the accident site on Glory Hill Road, which is just south of the Gympie Aerodrome.

Investigations are continuing on Wednesday evening.