Obesity is a health problem that affects men and women in similar numbers — and yet a Good Health investigation has revealed men are being short-changed when it comes to one of the most effective forms of treatment.

Twenty-seven per cent of men and 29 per cent of women in England are classified as obese (the proportion is similar in other parts of the UK), putting them at risk of deadly health problems ranging from high blood pressure and heart disease to cancer and type 2 diabetes.

By 2050, that proportion is expected to rise to half the population, putting individual lives at risk and the health service under increased pressure.

Diets don’t work for everyone, and exercise alone rarely shifts significant amounts of weight. But there is another effective solution: bariatric surgery.

This involves either reducing the size of the stomach or ‘re-plumbing’ the digestive system so that fewer calories can be absorbed. Most patients can expect to lose around a third of their excess body weight following the procedure and keep that weight off long term. 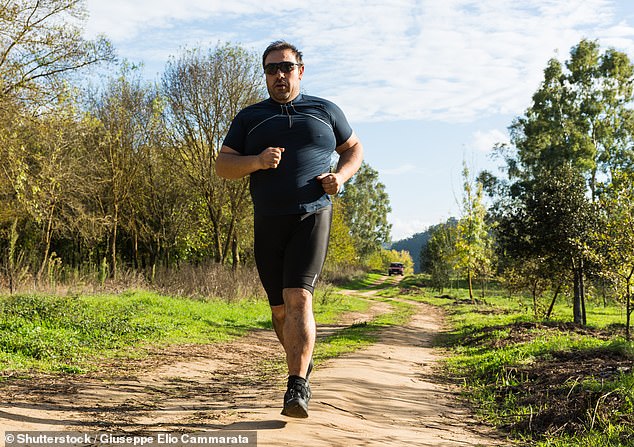 Anyone with a body mass index (BMI) of 40 plus, or 35 and over with an obesity-related health problem such as high blood pressure or type 2 diabetes may be eligible for the surgery on the NHS (a BMI of 25 to 30 is considered overweight; 30 to 40 obese; and 40 and above severely obese).

A staggering 3.6 million people in England are estimated to meet the criteria set out by the National Institute for Health and Care Excellence (NICE) for bariatric surgery on the health service — yet only around 6,000 per year currently get it, due to cost and capacity issues.

And Good Health has discovered a surprising disparity — for although research suggests that men’s health can be more severely affected than women’s by obesity, it seems that women are three times more likely to receive obesity surgery than men.

In fact, 76 per cent of bariatric operations are carried out on women, while just 24 per cent are performed on men, according to a study by Warwick University published in the journal Obesity Surgery in 2019 — a figure that experts say has not changed over the past 15 years.

Yet research suggests the reverse should be happening — certainly when you consider a major international review of 239 studies involving ten million people, published in the Lancet in 2016, which revealed that overweight and obese men were more likely to die from a weight-related illness than women who carry excess weight.

Another study of more than three million British adults in 2018 found that obese men died 4.3 years younger than those of a healthy weight, while for obese women life expectancy was cut by 3.5 years.

Further evidence comes from a four-year study by the University of California, which analysed data from obese patients and found that men seeking bariatric surgery tended to have more severe health problems — such as type 2 diabetes, high blood pressure, sleep apnoea (where breathing temporarily stops during sleep), depression and back pain — than women seeking the surgery.

Writing in the journal Surgical Endoscopy in 2013, the researchers concluded: ‘Although men typically comprise less than 20 per cent of bariatric surgery patients, they potentially have more to gain from these operations.’

More needs to be done to ensure obese men get ‘the surgical care [they] clearly need’, they warned. It’s a view that chimes with Ahmed R. Ahmed, a bariatric surgeon in London, who works in the NHS and in private practice.

‘The incidence of obesity in men and women is very similar, but we see very few men for bariatric surgery and those we do see are generally more unhealthy, with more underlying health conditions and more severe illness linked to their excess weight,’ he says.

Obesity affects men and women in a different way. Research by Oxford University found that excess weight is more likely to increase the risk of chronic kidney disease and chronic obstructive pulmonary disease (an umbrella term for a range of long-term lung conditions) in men than in women. 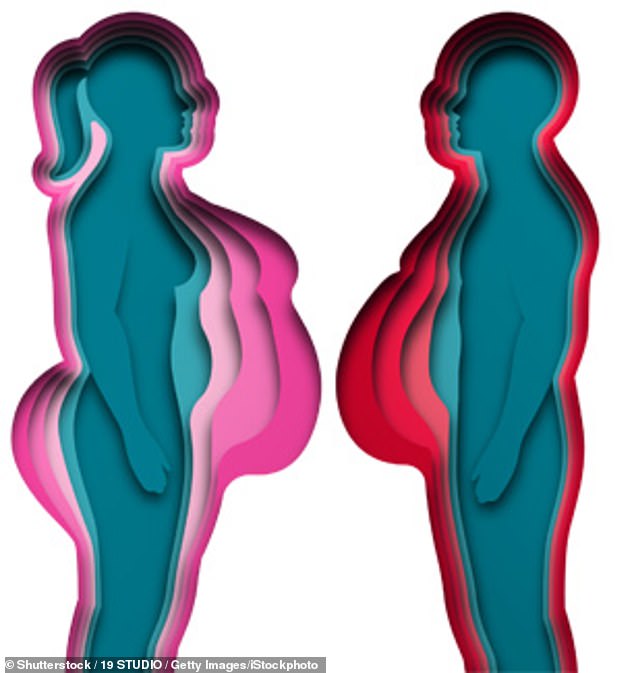 Twenty-seven per cent of men and 29 per cent of women in England are classified as obese (the proportion is similar in other parts of the UK), putting them at risk of deadly health problems ranging from high blood pressure and heart disease to cancer and type 2 diabetes

However, their research, published in the journal PLoS Genetics in 2019, found that a higher BMI was more likely to increase the risk of developing type 2 diabetes in women than in men.

The different ways in which men and women store fat is a key factor to understanding these differences, says Mr Ahmed.

‘Women tend to store excess fat under the skin, while men store it in the abdomen,’ he explains. ‘This visceral fat in men is more dangerous because it sits around the key organs and has been associated in many studies with a higher incidence of metabolic disease.

‘Visceral fat is associated with type 2 diabetes, which in turn can lead to kidney damage, and this might explain why men are more unhealthy when they do come forward for surgery.’

But just why are so few men undergoing bariatric surgery?

Newer, less invasive approaches are also being investigated such as left gastric artery embolisation, a procedure that involves blocking the blood supply to the area at the top of the stomach to turn off the ‘hunger’ hormone, ghrelin.

A trial of this procedure is currently under way at Imperial College Healthcare NHS Trust and University College Hospital, both in London, involving 76 male and female patients. So far ten patients have been treated and results are expected next year.

One of the problems for men is that eligibility for obesity surgery is not just about your BMI.

Most patients (unless they have a BMI of 50 and above) must show they have already tried to lose weight through exercise, diet, medication, counselling or cognitive behavioural therapy (where you learn to think differently about food) before they qualify for surgery, under NICE guidelines.

However, trying these various approaches means seeing a GP — something that men are notoriously reluctant to do.

Men are 32 per cent less likely than women to go to the doctor with a health problem, according to a study of almost four million patients across the UK, published in the journal BMJ Open in 2013.

As a result, fewer men seek help for obesity and, when they do, they tend to be older and with more health problems.

The University of California study found that 80 per cent of people wanting obesity surgery were women, and men who did come forward were older, heavier and had a greater number of other health problems.

This means, in turn, that men are less likely to be considered suitable candidates for the surgery — since it can be arduous, general fitness is an important consideration to the doctors who are putting patients forward for it.

Indeed, of those considered for surgical procedures, 58 per cent of women are judged suitable, compared with 42 per cent of men, according to the 2019 Warwick University study.

Oyinlola Oyebode, a professor of public health who led the research, says women are receiving a ‘disproportionate number of the available surgeries’.

‘Women may be more willing to seek help because there is more pressure on them to meet societal beauty standards and body shapes and sizes,’ she says.

Mr Ahmed agrees: ‘The bottom line is that women pay more attention to their health than mendo. Women are more likely to go to their GP concerned about their weight, be prepared to try a weight-loss programme for six months or a year and wait the two to three years it currently takes to receive this surgery on the NHS.’

Medical professionals may also be more likely to refer women for this type of surgery, adds Professor Oyebode.

Indeed, a report by the Social Market Foundation think-tank last year reported that men account for only 10 per cent of referrals to weight-loss programmes in general.

The frustration is that bariatric surgery can have significant benefits: repeated studies have concluded that it saves the NHS money in the long run, as patients who undergo it are less likely to suffer from health problems such as type 2 diabetes, high blood pressure, high cholesterol and heart disease. A report by the Office of Health Economics in 2010 estimated that obesity surgery pays for itself in just 12 months.

So if all the patients who met the criteria for weight-loss surgery received it,that would save the NHS around £56 million a year in prescription costs and GP visits.

However, there are potential side-effects to bariatric surgery — it can involve weeks of recovery and people must follow a healthy diet for the rest of their lives.

‘People who have had weight-loss surgery describe lifelong physical, psychological and social consequences, both positive and negative,’ says Professor Oyebode. ‘Those who are eligible should be assessed to see if it’s right for them.’

When men do have bariatric surgery their outcomes are just as good as women’s.

A 2013 Manchester University study, which compared men and women who underwent bariatric surgery, found that both sexes lost similar amounts of weight in the three years following their operations (although women lost weight faster than men).

Both also experienced a similar lowering in blood pressure and cholesterol levels, and improvement in blood sugar levels. The researchers concluded that the ‘use of bariatric surgery in eligible men should be encouraged’.

Similar results were found in a study, published in the journal Scientific Reports last year, which compared men and women who underwent bariatric surgery between 2013 and 2017.

Tam Fry, chair of the National Obesity Forum, told Good Health: ‘We know that women and men benefit equally from bariatric surgery. The problem is there has been a very slow acceptance in this country of bariatric surgery as a way to lose weight, and now that it is available, women are much more impatient to have it than men.

‘For the past 15 years we have screwed up by insisting bariatric surgery is a last resort, after other interventions such as diet and medication.

‘What we should actually be doing is giving more people bariatric surgery so that they don’t develop complications associated with their weight, such as type 2 diabetes. Making bariatric surgery the final option is a false economy.’

But anyone accepted for bariatric surgery won’t get a quick fix — the current NHS waiting list is two to three years, and it costs around £10,000 to have the operation privately.

Obesity expert Dr Anthony Leeds, a visiting senior fellow at Frederiksberg Hospital Copenhagen, adds: ‘The UK undertakes about one-ninth of the number of bariatric surgery procedures per head of population than is done in Sweden, yet the number of people in the UK who would benefit from surgery is in the hundreds of thousands if not higher.

‘The UK needs to provide more options for people who need to lose weight for medical reasons. We should be doing more bariatric surgery, but also should be offering more dietary options such as the NHS soups-and-shakes diet for diabetes remission, which is proving very effective in delivering enough weight loss (a little over 10kg).’

Understanding how obesity affects men and women differently is important, too, adds Tam Fry. ‘We have to change our attitude to bariatric surgery so more people — men and women — can get on the waiting list, without having to jump through hoops first,’ he says.

[ad_1] A Mexican-Lebanese businessman is facing possible criminal charges after he set fire to a $10million Frida Kahlo sketch, ‘transformed to…

[ad_1] Harry Redknapp has discussed his love for his wife Sandra, whom he has been married to for 55 years.  The former…

[ad_1] Nov. 3, 2022 — Maybe you’re on a leisurely neighborhood stroll or roaming the aisles of a grocery store. Chances…